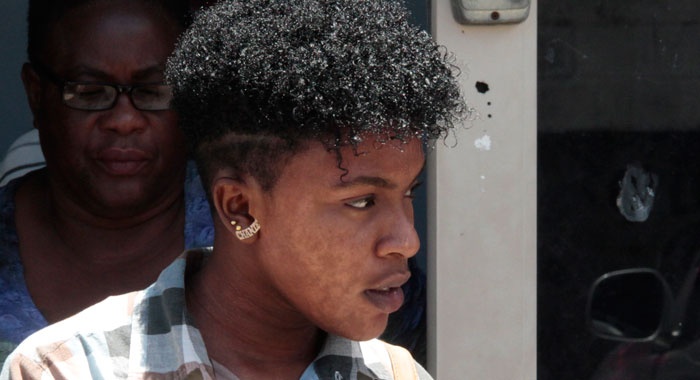 Chante James spent one week in jail for her crime and was ordered to pay a fine of EC$5,000. (iWN photo)

The Old Montrose woman charged with wounding a Community College student with a knife in Paul’s Avenue, Kingstown, earlier this year will spend the next week in jail while awaiting her sentencing.

After announcing a guilty plea today (Friday), Senior Magistrate Rickie Burnett ordered that Chantae James be remanded in custody for one week while he decides her sentence.

In finding the woman guilty, the magistrate rejected her claim that she acted in self defence when she used a knife on Sakaina John during an altercation in Paul’s Avenue, Kingstown on March 28.

John, a Community College student who was dressed in her uniform at the time, had to get sutures to close slit lips and a cut to her cheek.

And while James tried to portray John as the aggressor, she, like John, told the court that John dropped the knife after wresting it from her.

The court heard that the two women became friends on social media after James sent John a friend request on Instagram, which John accepted.

Sometime after, they had an online altercation over John’s boyfriend at the time, who was James’ ex-boyfriend.

The altercation included John posting to social media a topless photo of James.

John, however, had blocked out James’ face before posting the image.

The court heard that one week before the altercation in which John was wounded, James had accosted her at her school, but John had ignored James and walked away.

The wounding incident occurred when John and one of her friends and schoolmates, Jézell Prescott, were walking through Paul’s Avenue on their way to John’s mother’s workplace at Stoney Ground for lunch.

Burnett said he could not arrive at a conclusion of self defence in the matter.

The magistrate said he could not see why a knife had to be used.

He said the state of mind of the defendant at the time of the crime was established, when she told Justice of Peace Renwick Baynes of Diamond Estate, who had intervened in the altercation, that John had threatened her, so she (James) came prepared for her (John).

The magistrate said that the force used by James was extremely excessive, adding that even after wounding the complainant, James, on seeing John bleeding, accused her of being AIDS positive and cautioned John against causing her blood to touch her (James).

After the magistrate’s comments, the prosecutor, Police Constable Corlene Samuel told the court that the defendant had no previous convictions.

Defence counsel, Carlos James, then rose to mitigate, but the magistrate told him he could choose to do so then or next Friday, Sept. 21, when James will be sentenced.

The lawyer opted to mitigate just before the sentencing.