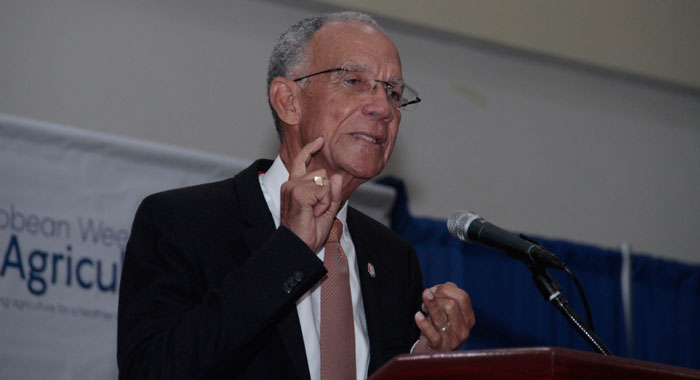 Trevor Hassell, president of the Healthy Caribbean Coalition, speaking at the beginning of Caribbean Week of Agriculture on Monday. (iWN photo)

BRIDGETOWN, Barbados — The head of a regional group working to curb the incidences of non-communicable diseases (NCD) in the Caribbean has highlighted the role of agriculture in pushing back against the lifestyle illnesses responsible for the majority of deaths within the region.

At the beginning of a speech titled “Strengthening Agriculture for a Healthier Future in the Region”, Trevor Hassell, president of the Healthy Caribbean Coalition, on Monday, asked the 200 Caribbean and international delegates to stand if they have a risk factor for a chronic non-communicable disease (NCD), have an NCD or have a relative who has one, or knows someone with a NCD.

“I hope you looked around and appreciated that 95 per cent of you stood,” he told the gathering at the Lloyd Erskine Sandiford Centre as he began the feature address at the opening plenary of the 15th Caribbean Week of Agriculture.

“Today the thesis that I will advance is that the health and wealth of the Caribbean is being put at risk by a small group of diseases, the NCDs; heart and blood vessel disease, cancer, diabetes, chronic lung disease and mental health, which account for most of the sickness and death frustrating socio-economic development,” he said.

He told the gathering the situation demands that “any consideration of the health of the region needs to, first and foremost, address the challenges posed by this group of diseases”.

Hassell, who is also chair of the Barbados NCD Commission, said though the linkage between health and agriculture has been recognised for many years, it has not been sufficiently discussed or acted upon.

Hassell told the gathering that these diseases result in tremendous sickness and suffering due to, among others, high rates of amputated limbs, frequent strokes and debilitating kidney failure necessitating dialysis.

“It is estimated that, of 190,000 Barbadians age 20 years and older, 90,000 are overweight or obese, 38,000 suffer from hypertension or high blood pressure, 19,000 are diabetic and at least one person suffers from a stroke or heart attack every day. Cancer of the breast in women and of the prostate gland in men occurs with apparent alarming frequency. One third of our children in the region are overweight or obese.”

He noted that the concern about NCDs have led Caribbean governments to point out that failure to address the epidemic of this group of diseases will slow and possibly reverse the socio-economic gains of the people of the region achieved post-independence.

“NCDs do not simply result in much ill-health but also present a significant economic burden.

“NCDs and mental health will cost Jamaica approximately US$17.2 billion dollars over the next 15 years which equates to 18 times Jamaica’s health expenditure in 2013,” he said.

Three years ago, it was estimated that while BD$64 million (US$1=BD$0.50) was spent on the treatment of cardiovascular diseases and diabetes in Barbados, the economy may be losing as much as BDS$145 million dollars annually due to missed workdays, low productivity and reduced workforce participation. Together these costs represented around 2.6 per cent of projected GDP in 2015.

“Some 60 per cent of health budgets is spent on NCDs in several Caribbean countries,” Hassell said.

He said that in view of the dominant position of NCDs in causing ill-health and sickness, it is apparent that action to create a healthier present and future through agriculture requires focus on addressing the NCDs, both from a health as well as an economic perspective.

80 per cent of NCDs are preventable among all ages

Hassell said there is good evidence to show that 80 per cent of NCDs are preventable among men and women of all ages in all parts of the world through addressing tobacco use, physical inactivity, unhealthy diet and abuse of alcohol.

Unhealthy diet is one of the principal lifestyle factors that predispose persons to NCDs and that factor, more than any other, is linked to agriculture.

“It now bears examination with consideration of what is needed and the role that agriculture should play in contributing to a healthy diet and hence the reduction of NCDs.”

The linkage between agriculture, nutrition and health has been recognised in the region for some time, Hassell said.

The linkage was subsequently reaffirmed in 2007 when CARICOM Heads of Government in the Port of Spain Declaration spoke of “strong support for enhancement of food security; elimination of trans-fats from the diet; pursuit of fair trade policies;  and mandating of the labelling of foods”.

“The implications of these declarations are very relevant to the link between agriculture and health given: (i) The increasing prevalence of chronic nutrition-related diseases in the region; (ii) The loss of traditional preferential markets and over two decades of structured economic reforms; and (iii) The effects of the globalization process on food trade and on health,” Hassell said.

He said a principal role that agriculture should play is in the provision and making available of healthy food such as vegetables, fruits, legumes, nuts, grains and fish.

“There is an urgent need to establish and strengthen food and nutritional goals so that the agriculture and food systems can deliver adequate and nutritionally appropriate quantities of food, especially to low income and vulnerable groups.

“Agriculture is the sector best placed to affect food production and consumption of nutritious foods needed for healthy and active lives.

“The case needs to be made then that agriculture has a unique and critical role in improving nutritional status, and in doing so it is necessary to work together across sectors to create a regional/national food system sensitive to nutritional outcomes,” Hassell said.

He said that in addressing the situation, several priority actions need to be considered and acted upon to strengthen agriculture for a healthier future.

There is a need for national governments to develop and implement a comprehensive range of well-targeted policy actions aimed at providing an environment conducive to nutritious, healthy diets while ensuring that agricultural and food policies are supportive of health policies, Hassell said.

These policies should be supported by international health, food and development agencies working more effectively together around NCDs and nutrition.

“By researchers engaging with the monitoring and evaluation of policy actions and provision of evidence to policymakers. By donors and research funders supporting capacity building for effective policy development and the training of public health nutrition professionals. And civil society should act as advocates and watchdogs, by monitoring and assessing policy actions and their impact on nutrition and NCDs, and by developing a social movement to create demand for policy change. “

Hassell said individuals need to be better informed, to read labels, to eat healthy, to avoid unhealthy fast foods and sugar sweetened beverages, even as they pursue the other healthy lifestyles.

During the five-day period of the event, taking place here until Oct. 12, the opportunity is taken by regional organisations to host a number of workshops, which will be held simultaneously throughout each day.

Among the topics to be covered under the technical workshops are the development of the regional coconut industry, youth employment and entrepreneurship, climate resilience in the agriculture and fisheries sectors, small ruminants, and the school feeding programme.