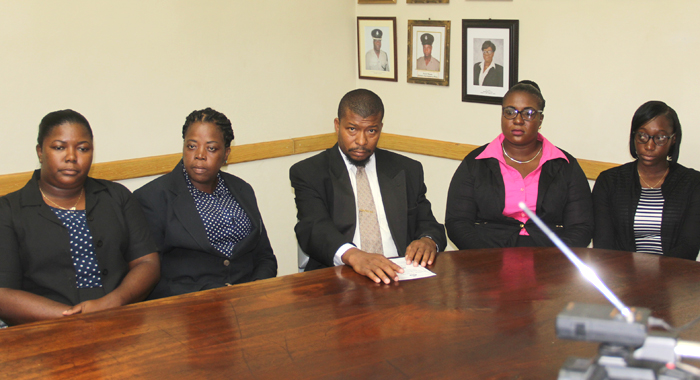 Nine police officers with over eight decades of combined experience have been selected to outfit the Sexual Offences Unit of the Royal St. Vincent and the Grenadines Police Force.

The unit was launched on Wednesday with acting Commissioner of Police, Colin John, saying that it will investigate primarily cases of unlawful sexual offences with a girl under the age of 13 and sex crimes against visitors.

The most senior officer in the unit is Sergeant Desrine Daize, who has been a police officer for 19 years.

“And I am proud to see the establishment of the sexual offences Unit and it just proves to show our organisation’s dedication to the investigation of these matters,” Daize said.

Daize, a detective, was stationed at the Barrouallie Police Station on April 16, 2016 when she was dispatched to the Vermont Police Station to assist her colleagues in an investigation.

Police in Vermont had Veron Primus in custody in relation to a report that he had allegedly kidnapped and held fellow villager 24-year-old Mewanah Hadaway in the basement of his home from Jan. 1, 2016, to about April 15 that year.

The investigation in which Daize was involved led to Primus, 30, being charged with the November 2015 murder of real estate agent Sharleen Greaves, 33, at Arnos Vale.

Another member of the team is Corporal Nicola Williams-Browne, a detective who has been a police officer for 19 years.

“I am proud to say that I am proud to be a member of this unit. I am specially trained and I can promise you that I will give of my service to the public with the training I have,” she said.

Constable Tamika Charles told the launch event that she is “… grateful for this opportunity and I promise you that I am going to do my best.”

Verna John, also a constable, has been enlisted for 10 years.

“I feel very proud being a part of the Sexual Offences Unit and I promise the commissioner and the public that we will work collectively to do our best to solve crimes of this nature,” she told the launch.

Another seasoned detective on the team is Constable Hadley Ballantyne, the only male member of the unit.

Ballantyne, who was previously attached to the Criminal Investigations Department, has been an officer for 16 years.

“I have been blessed with the task to be the only male among all the females with this new unit. And I believe that with the help of God I’ll do my best to see perpetrators come to justice and with the assistance of the other ladies, I will keep myself abreast of how to deal with sexual offences.”

On Thursday, iWitness News learnt that another male, one Constable Hackshaw was added to the unit.

Constable Josette Scipio-Galley has been a police officer for 19 years.

“I am very happy that I am part of this history this morning. And, as a unit, we are going to endeavour to see that sexual offences will not be a thing of the past but we can eliminate the statistics that we have. So I want to thank those who were able to make me part of this sexual unit and we will do our best for St. Vincent and the Grenadines,” she said.

And, Constance Romancia Jordan said:  “I am proud to be part of this unit and I promise to put my best foot forward always.”

One Constable Pilgrim, who is also part of the unit, was absent from Wednesday’s event.

The commissioner said he couldn’t say if there is any particular case that would occupy the immediate attention of the unit.

“We will have to look at the files and determine that but I can’t state particularly,” he said, adding that cold cases will be sent to the unit for review.