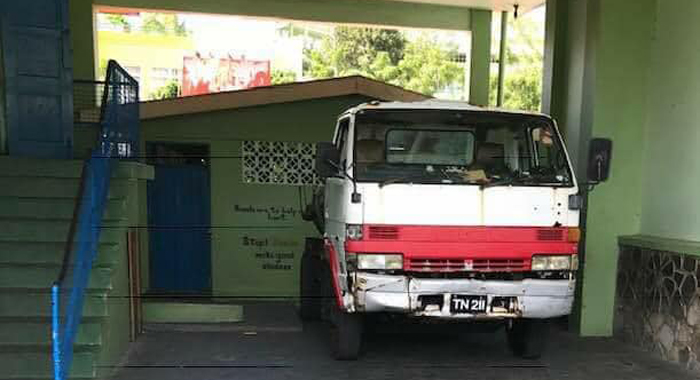 The septic truck at Kingstown Preparatory School on Thursday.

Students at the Kingstown Preparatory School were sent home at noon on Thursday, apparently because of a sewage problem — the second school this week.

The Ministry of Education, at 10:45 a.m. Thursday, issued an “URGENT Press Release”, advising parents and guardians of students attending the Kingstown Preparatory School that the school would close at noon.

“This is due to an emergency situation that has arisen at the school and is being addressed,” the ministry said but did not elaborate.

The ministry asked parents and guardians to collect their child/ward at 12 noon and advised that school will resume on Friday, Nov. 30.

However, the St. Vincent and the Grenadines Teachers’ Union, in a Facebook post on Thursday, showing photos of a septic truck parked inside the compound of the Kingstown Preparatory School, apparently emptying the septic tanks.

On Tuesday, the union advised teachers at the Lowmans Anglican School to withdraw their services, with immediate effect because of a sewage problem at the school.

“All the toilets that serve students have not been able to flush since Monday 26th November 2018,” the union said in a press statement, adding that a sewage truck was at the school emptying the septic tanks while school was in session.

The ministry of education was heavily criticised for not closing the school until the sewage situation was remedied.

Classes resumed at the Lowman’s Leeward school on Wednesday.

5 replies on “Sewage problem forces another school to close ”