‘Get rid of this prohibitionist view’ of weed — Patel 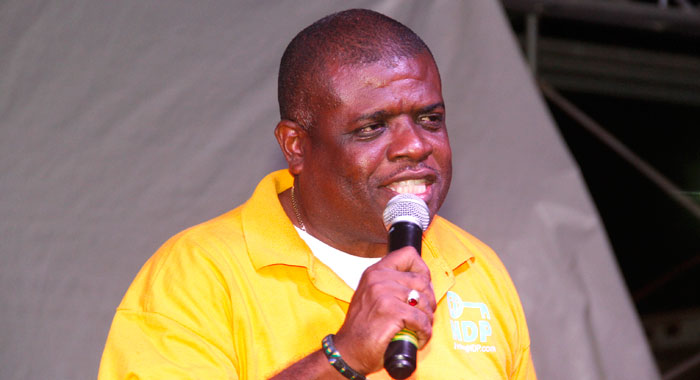 Roland “Patel” Matthews, Member of Parliament for North Leeward, the hub of marijuana cultivation in St. Vincent and the Grenadines, on Monday, called on Parliament to rid itself of the prohibitionist attitude toward marijuana and decriminalise possession of up to two grammes of the plant for recreational use.

He also said that residents of SVG should be allowed to have up to five plants at their home for medicinal or recreational use.

“And let us get rid of this prohibitionist view,” he told lawmakers as he debated the Medical Marijuana Bill, which was passed into law when it went to a vote one day later.

That piece of legislation, along with the Medical Marijuana Amnesty Bill, was being debated as traditional growers and users of marijuana demonstrated outside the Parliament building in Kingstown in support of and opposition to the bills.

“Even the bill itself is crafted in a manner as if marijuana is something that you have to handle with care or with some big gloves on your hand to make sure it ain’t touch your skin,” Matthews said.

“We have to change the mindset of our people, Mr. Speaker, and that is why education as a part of this thrust going forward is important to let our people understand that this marijuana plant that our grandparents have been using for donkey years to ease the pain, to get rid of the cold…” said Matthews a former teacher, who admitted experience in marijuana cultivation.”

He said that the bill made no provision for traditional medicine practitioners.

“The people in the village who used to boil this and that to help out — the herbalists. But I hope we can correct that going forward, Mr. Minister.”

Matthews noted that the CARICOM Marijuana Commission, set up on the urging of Prime Minister Ralph Gonsalves, said in its report that there is overwhelming support for law reform moving away from the prohibition on cannabis and consequent criminalisation.

The commission further said the prohibition induces more harm than any other possible consequence of marijuana itself.

“Mr. Speaker, while I support our thrust to establish a medical marijuana industry, I also believe, Mr. Speaker, that we could have done better with this legislation,” Matthews said.

“Mr. Speaker, the Rastafari will tell you that they have been using marijuana for a long, long time.  We know for a fact that many who use recreational marijuana; to them it serves as an inspiration. Some meditate, some came up with songs.”

Matthews said that one of the problems in addressing the concerns of traditional farmers is land tenure.

He said that almost everyone in SVG who plants ganja does so in the forest reserve areas and asked where they will now grow the plant under the medical marijuana regime if they do not have access to land.

The legislator said he wants to see that traditional farmers are treated in a special way and for the state to offer leaseholds so that they, these farmers, can transition to the planting of medical marijuana.

Matthews said he does not want legislation that, in essence, forces traditional farmers to leave the marijuana industry.

Matthews said that the commission noted that marijuana is a victimless crime, adding that this is one of the reasons why he supports the findings of the CARICOM Marijuana Commission.

“I go down the road with a spliff (marijuana cigarette) in my pocket and police lock me up. Who suffer? But then I pay monies and serve jail time; even longer than somebody who attempted rape or somebody who wound somebody. And that is the reason why I am in support of the CARICOM report that calls for serious law reform.”

He said that the NDP also believes that if they are going to talk about decriminalisation for up to two ounces, they should also talk about reparations for persons who were charged and had to pay fines for less than two ounces. We should find a way of compensating them, because it come like they spend bad money — reparatory justice. And we like to hear about that, right, Mr. Speaker.”

Gonsalves asked, from across the floor, who would pay the reparatory justice.

“Who charged them?” Matthews responded. “The state.”

He said that the NDP believes that while the nation is on this path and the world is changing rapidly “and everybody is going ganja crazy”, SVG has “an opportunity now to do something that the rest of the world can look and say, ‘that little island in the Caribbean has, indeed, led the way.’

“We’ve had Jamaica to look at, Antigua, to a lesser extent, states in the United States have all gone in a particular direction. We need to do more. We need to accept the fact that marijuana is here to stay and it is going to be a significant game changer in the future medicinally and recreationally,” he said, adding that SVG has a niche market in SVG.

He said that unlike bananas where the main market was Europe, medical and recreational marijuana have more markets than bananas.

“The world is going in a particular direction, it’s time we get on board and free up the herb.”