‘Sovereign’ man not fit to plead 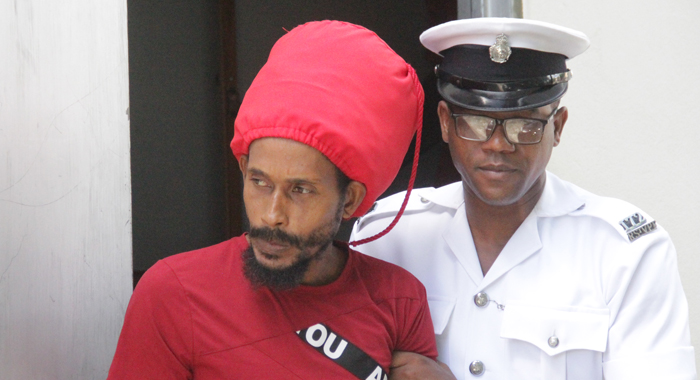 A police officer escorts Hezekiah Naphtali from the Serious Offences Court on Nov. 28, when he was sent for psychiatric evaluation. The Mental Health Centre says he is not fit to plead in the case. (iWN photo)

The Mental Health Centre has concluded that a man who says he cannot be made to appear before a court in St. Vincent and the Grenadines because he is “sovereign” is unfit to plead and must undergo further psychiatric treatment.

Senior Magistrate Rickie Burnett made that observation at the Kingstown Magistrate’s Court on Monday, when Hezekiah Naphtali appeared before him for the second time since July on traffic charges.

However, Naphtali’s lawyer, Jomo Thomas, questioned the process through which the Mental Health Centre came to its conclusion, saying that the psychiatrist evaluated his client for less than 15 minutes.

The lawyer further noted that when Naphtali was evaluated months ago, the same centre said that he was fit to plea.

Her decision came after Naphtali said that appearing before the court is a violation of his indigenous rights, as SVG is “a colony”. He further said that he is a Moor and made other claims to the court in a heated exchange with the chief magistrate.

He was ordered to reappear before the Kingstown Magistrate Court on Dec. 17.

Naphtali was first arraigned before Burnett at the Kingstown Magistrate’s Court in July, when he made similar claims to those that he made at the Serious Offences Court.

After reading the medical report in court on Monday, Thomas told the court he thinks that his client’s assertion that he is a Moor, sounds “ostentatious” or “wild” to some, but much of what the Moors did is recorded in history.

He said he would need for Naphtali to be evaluated by an independent psychiatrist, adding that a psychological evaluation had found no evidence of psychotic behaviour.

Thomas said he understands that after evaluating his client for less than 15 minutes, the psychiatrist concluded that he was psychotic and needed medication.

The lawyer said such action is an abuse by the state and Naphtali has “properly” refused to take the medication.

He said that Naphtali’s assertions about being a Moor is not unlike his (Thomas’) embrace of Black Power and its trappings when he was a youth.

Thomas said that he would file at the High Court a writ of habeas corpus — a writ requiring a person under arrest to be brought before a judge or into court, especially to secure the person’s release unless lawful grounds are shown for their detention.

However, Senior Magistrate Rickie Burnett noted that the chief magistrate had sent Naphtali for psychiatric evaluation and, in light of the findings of the medical professionals, the accused man’s hospitalisation has to continue.

Burnett, however, noted that the psychiatrist had not given indication of how long Naphtali should be hospitalised.

But Jomo asked if someone institutionalising someone should not be based on a scientific evaluation that the person is a danger to themselves or others.

He told the court that he has a cousin who is certified bipolar but is not institutionalised.

He said that Naphtali has not threatened anyone and goes about his business quietly.

Burnett noted Thomas’ comment about filing a writ of habeas corpus and ordered that Naphtali be returned to the Mental Health Centre and reappear before the Serious Offences Court on Jan. 1, 2019.

Naphtali is charged that on July 28, 2018 at the Grenadines Wharf in Kingstown, being the driver of motor vehicle PD139, he did use the vehicle without the relevant licence in respect of the said vehicle for the period April 1 to Sept. 31, 2018.

He was further charged that on the same date and place, he used the same vehicle without there being in force a policy of insurance in respect of third party risk in respect of the said vehicle.

A third charge was that Naphtali did drive the said vehicle without being the holder of a driving permit.

5 replies on “‘Sovereign’ man not fit to plead”