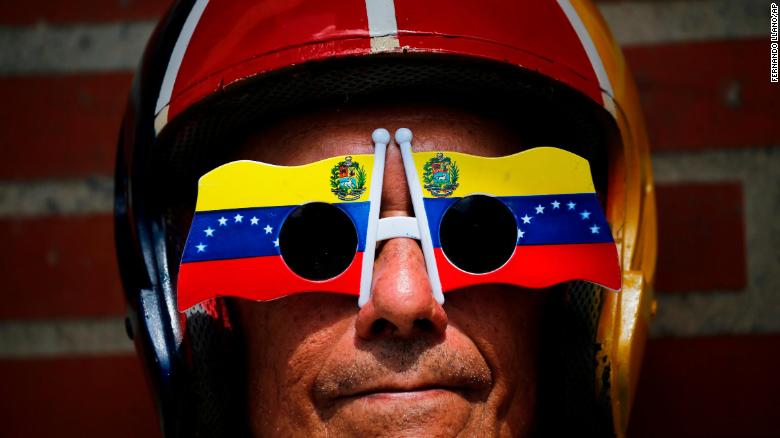 A protester in Venezuela.

The main opposition New Democratic Party (NDP) says it recall, with deep appreciation, the long-standing bi-lateral co-operation and mutual assistance between Kingstown and Caracas “and pray for a resolution of the current crisis, in the best interests of the Venezuelan people”.

The NDP’s view comes in a statement in which it also said: “Fully cognisant of the challenges, stresses and strains to which even the most established democracies are subject, we reiterate our unwavering commitment to the solidarity we share with other countries of the region with the people of the Bolivarian Republic.”

The NDP said that as the socio-economic and political situation in Venezuela becomes increasingly precarious, “our concern for the safety, security and general well-being of the people of that regional sister country occupies our greatest consideration at this critical time”.

The NDP urged “the protagonists in the country, in particular, as well as all external parties, to be guided by that primordial humanitarian principle.

“The citizens of that country, like all other people, deserve to live in peace and security, in their own homeland, in order to build a healthy, prosperous and felicitous existence, utilising their human and natural resources, for the benefit of all.”

The NDP said that in accordance with its constitution, as the oldest active political party in SVG, it has “actively worked to forge lasting relations with the governments and people of Latin America, even before the attainment of political independence in 1979.

“Indeed, we have moved in the footsteps of our forebears, who, since the mid-19th century, have traversed the region and beyond in search of opportunities for economic advancement.’

The NDP, which was in office from 1984 to 2001, said that in government, they have “consolidated and extended interstate relations, firmly based on mutual respect and non-interference in domestic affairs.

“At the sub-regional, regional, hemispheric and wider international levels, through our membership in the Organization of Eastern Caribbean States, CARICOM, the Association of Caribbean States, the Organization of American States and the United Nations, our party is a consistent voice for our guiding principles of respect for, and promotion of human rights, and self-determination of peoples through representative democracy. “

The NDP said that having been in opposition since 2001, it is “fully aware of the less salubrious manifestations and frustrations of democracy through abuse of government power over the people.

“Even now, some three years after the last general election in SVG, in December 2015, the people are awaiting the decision of the courts of law in relation to petitions filed in a situation where the government holds a narrow one-seat majority for a second consecutive election. It is a clear case of justice delayed being justice denied,” the NDP said.

“The security of states is best served through principled, multi-lateral co-operation among themselves, regardless of size, individual wealth, or strength. For small and micro-states like SVG it is the only option.”

Last week, founder of the NDP Sir James Mitchell, a retired politician, said that SVG ought to support the opposition in Venezuela, where Juan Guaidó, president of the National Assembly, has declared himself the nation’s president.

“Our position here, whether we stand up with the United States, or we stand aside, our choice will be known historically…” the former prime minister said on radio.

“In my view, we have a lot of debt with Venezuela and we should bear in mind, if there is a change of government, the first thing we should be doing is lobbying to make sure we get rid of all the debts and get our debts from Venezuela written off,” said Sir James, who was prime minister from 1984 to 2001.

His comment on Wednesday came one day after the government, in response to a question from Opposition Leader and NDP president, Godwin Friday, said that voting against the Jan. 10 OAS resolution on Venezuela “was the right thing to do”.