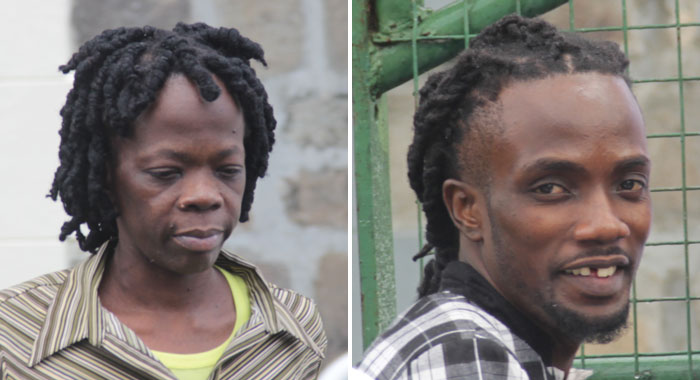 Kenetta Jame, left, and Mark Williams on their way to prison on Friday. (iWN photo)

A man who used money from EC$100,000 stolen during a burglary to hire a lawyer for the burglar, has been jailed for his role in the crime.

Also jailed for her role is the burglar’s sister who helped him conceal some of the stolen loot.

Kenetta James, 40, of Chateaubelair, and Mark Williams, 26, of New Montrose were, on Friday, each sentenced to two years in prison for handling stolen goods.

They were convicted last month at the high court on a charge that between June 19, 2013, and July 2, 2013, knowing or believing a sum of money to be stolen, dishonestly received it for their own benefit.

The money was part of the EC$110,000 that Junior James stole from the General Employees Co-operative Credit Union (GECCU) branch in Georgetown.

The police carried out investigations and arrested Junior James, the brother of Kenetta James.

He pleaded guilty to that burglary and was sentenced to four years and eight months imprisonment.

Neither Kenetta James nor Williams had a lawyer in the trial, which ended in a conviction, on Jan 22, by the nine-member jury after a two-day trial.

The police investigation led the police to Mark Williams and they interviewed him.

He said he had met Junior James and others drinking at a shop the morning after the burglary.

The men offered him drinks, which he accepted and Junior James told him, Williams, that the men “eat a food out Georgetown”.

Williams said he understood the expression to mean that they had taken things belonging to others.

When Williams later found out that Junior James was arrested, he visited him in police in police custody.

Junior James whispered to Williams to collect some money from one Tanty Mary and Williams went to the lady in question and she gave him a bag with money.

The bag was dirty and seemed to have been buried.

Williams took the bag home and from that money he took EC$1,100 and concealed the bag with the balance in his backyard.

He used some of that cash to retain counsel for Junior James and gave some of it to James’ girlfriend and kept some for himself.

Later, on the instructions of Junior James, Williams handed over the bag of cash to Kenetta James, Junior’s sister.

Kenetta first hid the bag in Kingstown in a nearby garbage can and later retrieved it, took it to Chateaubelair and buried it on a hillside near her home.

The police went to Kenetta’s home to execute a search warrant.

They found nothing at first but then, she led the police to her hillside hiding place, dug up the bag and she gave it to the police.

Williams also acknowledged his transgression and asked the court for leniency, specifically a suspended sentence.

In handing down his sentence, Justice Brian Cottle noted that in St. Vincent and the Grenadines, the maximum penalty for handling stolen goods is 10 years, but there are not yet sentencing guidelines for the crime.

He said that, in a case in St. Lucia, a prisoner who pleaded guilty was sentenced to four years.
The judge also noted that in St. Lucia, the maximum sentence for the crime is 14 years.

Justice Cottle said that he was content to begin with a benchmark of four years.

Regarding the aggravating and mitigating circumstances, Cottle said that in the case of Kenetta James, she has no previous convictions and she assisted the police to recover some of the stolen cash.

“But in aggravation, it must be noted that this was a serious, commercial burglary,” he said noting that most of the EC$110,000 stolen was not recovered.

He pointed out that James is 40 and the mother of one daughter.

Since she was remanded for sentencing, prison authorities say that she had behaved well and they consider her a good candidate for rehabilitation, the judge further said.

A social inquiry report has also revealed that her neighbours consider her a quiet, mannerly person.

Regarding Williams, he had a troubled childhood and dropped out of secondary school at age 4 and had two previous conviction for burglary — one when he was 10 and the other at age 16.

The judge said that Williams is now 26 and since the second burglary, seems to have turned his life around.

He said the man’s neighbours and employers describe him as a quiet hard working individual and a good candidate for rehabilitation.

Justice Cottle said that James and Williams displayed very bad judgement when they agreed to assist Junior James to conceal or retain the proceeds of his burglary.

Both would have known that the money was derived from criminal activity, he said, adding that they did not plead guilty to the charge at various opportunities and would, therefore, get no discount.

The judge said he did not take into account, as aggravating features, Williams’ previous convictions as they were some time ago and when he was not yet an adult.

The judge said that when he looks at the features of the case, he was content to move downward from the starting point and sentenced the duo to two years in prison starting from the date of their conviction and including the time spent on remand.

Justice Cottle ordered that the monies recovered be returned to GECCU.