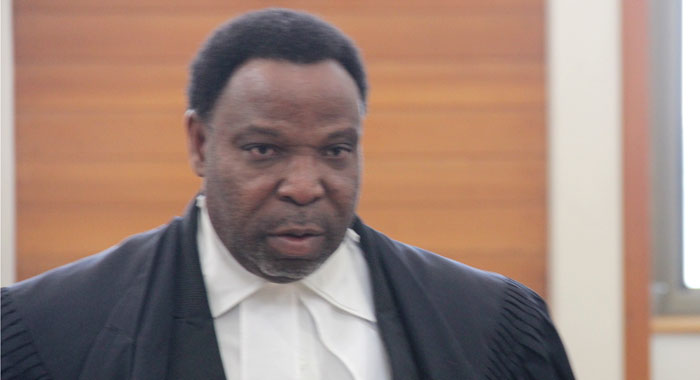 The ruling of the court in Antigua and Barbuda is being cited as ground on which the High Court can overturn the result of the North Windward vote in the 2015 general election.

In his closing submission last Wednesday, Keith Scotland, lead counsel for North Windward petitioner, Lauron “Sharer” Baptiste, noted that in the Antigua case, the court ruled that there must be a substantial departure from the election procedure that will cause the ordinary person to conclude that the election was a sham or a travesty.

“The case in North Windward, although the evidence was presented in only one polling division, NWI, we say that the breaches complained of spanned the entire North Windward,” Scotland argued before the election court in Kingstown last Wednesday.

He said that the first and fundamental breach is that contrary to the election rules, no Form 16 statements were presented at the purported final.

His side is also arguing that no final count took place, contrary to the claims of the presiding officer, Ville Davis.

Scotland told the court that the testimony of Cheryl Sutherland, who testified – after being summoned — on behalf of the petition, is vital in the case.

Sutherland, a voter who was asked to witness the final count, in keeping with the provisions of the law, told the court that there was no individual counting of the ballots in North Windward during the final count on Dec. 10, 2015.

“If her evidence on what she saw and observed is to be believed, it brings home this case for North Windward,” Scotland said in his closing submission.

Lauron “Sharer” Baptiste of the main opposition New Democratic Party has brought the petition challenging the announced election of The Unity Labour Party’s Montgomery Daniel as Member of Parliament for North Windward in the Dec. 9, 2015 general election.

The NDP is also challenging the announced victory of the ULP in Central Leeward, and a ruling is slated for March 21.

Scotland said that even as the trial moved to its final day, no documentary evidence of the statement of poll, as pleaded had been presented to the court.

“There is no submission that it was disclosed. We received documents, yes, and if it were not from the hand of learned senior counsel who we got it from, my lord, I would not have accepted it. It’s not before this court. We received something purporting to be form 16,” he said.

Scotland noted, however, that the court would see that no Form 16 was ever disclosed.

He noted that the Sylvia Findlay-Scrubb, who was supervisor of elections at the time of the election, had said in her testimony that if the Form 16s exist they are in the ballot boxes.

It is against the law to open a ballot box after the final count without the permission of the court and the government has opposed application to open the ballot boxes and the court has ruled in their favour in this regard.

“My short submission is that the issue of the lack of Form 16 was pleaded, the other side had more than ample time to reply to it. They never condescended to put one form 16 before this court. That, coupled with the failure of [electoral officers] Mr. Osment, or Bradie King, who were the two persons other than Miss Sutherland who witnessed the purported final count, or Chevy Hoyte, who is the respondent’s representative, put the state of the evidence before this court on a serious issue in the balance.

“In those circumstances, we will submit that these are not trivial issues but these issues go, especially the final count and the form 16, go towards the meat of an election, whereby this has no documents in North Windward that this court can conclude that what transpired represented the will of the people. A lot was submitted in Central Leeward. None was submitted in North Windward.”

Ville Davis, the returning officer for North Windward, had told the court that Osment and King were unwilling to testify because they are pastors.

Scotland noted to the court that Davis was the only witness that the respondent had called to give evidence about what took place at the purported final count.

He noted that the final count is of all the votes cast in the entire constituency of North Windward.

Scotland noted that Davis, in his witness statement, puts Sutherland into context when he said that King had gone to Sutherland’s home and asked her to witness the final count.

“… she was a schoolteacher with no particular political inclination, and most importantly, Mr. Ville Davis said that as far as he was aware, she was an independent and an observer,” Scotland told the court.

“In other words, this is a neutral person coming to testify by subpoena of the court…” he said.

Scotland said Sutherland went through the most grilling in half an hour of cross examination but maintained that she saw no advertisement for the final count, a form 6.

“Her evidence, unshaken was that no individual votes were counted. And if your lordship takes Cheryl Sutherland from paragraph 4 of her witness statement, when she was speaking about the count, what she was seeing, she started by, “I observed…’

“So, in other words, Cheryl Sutherland is speaking contemporaneously about her observation. And although she was questioned in every possible way about the individual counting of votes, which is the essence of the final count, she was adamant. My lord, I ask you to take Cheryl Sutherland as a witness of integrity.”

He noted that when questioned about the Form 6, Sutherland said the only one she knew was in school and when asked about the official mark she explained what she thought it was.

“In other words, she was not a witness who came here to fib. When she was found in error, she admitted her error but she admitted that there was no individual counting of votes. And that is the gravamen of the final count.”

Sutherland said that at the purported final count, all the returning officer did, was he saw the numbers on envelopes and he took that as final, Scotland told the court.

Scotland said that even if the court disbelieves Sutherland, from the evidence that is before this court, she attended the final court from around 8:30 a.m. to 9 a.m. until 2 p.m.

“That was uncontroverted. It was never put to her that she remained beyond 2 p.m. Ville Davis said that his continuing of the final count lasted until 8:30 to 9 o’clock at night. This court has to ask itself if we take Cheryl Sutherland and say she is fibbing, there was a final court, whatever happens, she left at 2. Ville Davis agrees that she left when she said she left.

“My Lord, what was Ville Davis doing between 2:30 and 8 o’clock in the absence of anybody doing a final count? If this court was a jury, that is more than reasonable doubt. In another matter, my lord, this is evidence beyond reasonable doubt. What was Ville Davis doing by himself from 2:30 until 8 o’clock when the prime minister was being sworn in?”

Scotland submitted that the lack of a final count and the failure to provide the form 16 are not trivial matters but go to the heart of the election where the court can’t verify that the will of the people has been expressed by the vote.