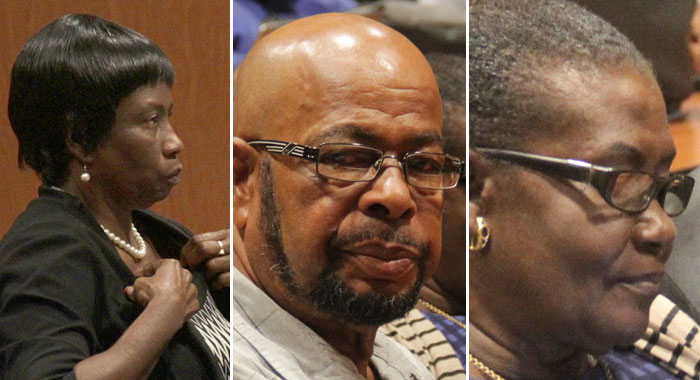 Kathleen Jeffers, Ville-Davis, and Veronica John, three of the officials who presided over the 2015 general election. (iWN photos)

Opposition senator Kay Bacchus-Baptiste says that the persons who presided over the various polling stations in the 2015 general elections should be replaced before the next poll.

She further said that in the absence of an independent electoral commission, her New Democratic Party should have a say in deciding who are to be appointed presiding officers.

Bacchus-Baptiste’s comments came on Saturday at the NDP’s rally in Layou, as she criticised the actions of some presiding officers in the 2015 general elections.

Her comments were informed by the evidence adduced in the trial of the two petitions on which the court is slated to rule on March 21.

Bacchus-Baptiste said that according to the NDP’s evidence, apart from being welcoming when ULP people came in, John refused to put the vote of an NDP supporter in the ballot box, claiming she heard a click and saw a flash.

“In broad daylight, she saw a flash. Even the lawyer on the other side said that was wrong. You cannot disenfranchise a voter because you think you saw a flash.

It is alleged that there were 39 counterfoils more than ballots at the polling station, and John admitted to telling some voters, “Show me your voting finger”, the words of a popular campaign song for the ruling Unity Labour Party in the 2015 vote.

Kathleen Jeffers told the court that she made many mistakes in her conduct of the poll and the final count at CLA1, the polling station at the heart of the Central Leeward petition.

In that same constituency, Wallace Christopher admitted to counting ballots he knew he should not have been counted, because they did not have his official mark and initials.

In North Windward, the returning officer, Ville Davis, said he lost all of the Form 16s, the records of the outcome of the poll.

“You realise how serious that is? It’s not a football election you know. It’s not a little election with a club. It is a national election and you tell me that yuh lost all the papers. Listen to me, the petitions were filed merely 21 days after the election in 2015.”

She said that presiding officers take an oath to be free and fair and keep proper account.

“… Now tell me, our taxpayers’ money paid that man to run an election. He took mental notes, he lost all the papers, he lost the tally sheet, and he said even the papers of Bradie King, he lost them…

“So hear, I am calling on the new Supervisor of Elections to recall all those persons who are presiding officers, who are returning officers. I am saying that the NDP must have a say in who – until we get an independent electoral commission — not one under the prime minister’s office and Julian Francis, … we must have a say in who are presiding officers. I am not saying they are all like that, but they could never be another Gaymes.”

Winston Gaymes was the returning officer in Central Leeward, and admitted to counting at the final count, ballots that did not have the official mark or initials of the presiding officer.

Gaymes, however, was not called as a witness at the trial and is said to have been living in the United States for some months now. Some reports had said that Gaymes would have testified via Skype.

“Where is Gaymes? … He is a party and Gaymes never came to give evidence because his affidavit was so filled with lies, but the time the other people were finished giving evidence, they dared not call him, just like in North Windward.”

Bacchus-Baptiste told party supporters that the NDP has already won as it has exposed the illegal practices in the election.