Men sentenced to 180 years in jail for weed 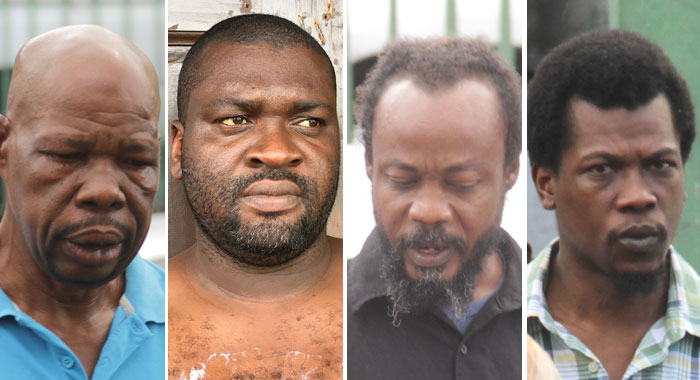 Four men were, on Wednesday, sentenced to a combined total of 180 years in jail for possession of 2,007 pounds of marijuana on Feb. 20, 2014 with intent to supply to another as well as possession for the purpose of drug trafficking.

However, they will serve a combined total of 59 years, since the sentences will run concurrently.

The effect of the sentences handed down by High Court judge Justice Brian Cottle will see the men serving terms of imprisonment of 11, 15, 16, and 17 years respectively

The men are Daniele Baptiste, 39, of Owia; Calvert Prince, 51, of Petit Bordel; Ezekiel Robin, 38, of Clare Valley; and Denzil Sam, 32, of Chateaubelair.

They were found guilty of possession of 907,546 grammes and 3,632 grammes of cannabis with intent to supply, and one count each of possession of the quantities for the purpose of drug trafficking.

The crown had alleged that the men, along with Godfrey Cumberbatch, then a 42-year-old sea captain, of Glen, and Rajiv Deshong, 33, of Redemption Sharpes, committed the offences in the waters off Chateaubelair.

Cumberbatch was shot and killed at his home in Glen on June 12, 2014, one week before a court hearing in the matter and Deshong absconded.

The facts of the case are that on Feb. 20, 2014, a joint coast guard and police patrol intercepted the men aboard a go-fast board 13 nautical miles off the north leeward coast of St. Vincent.

As the Coast Guard vessel approached, the men attempted to flee while throwing overboard bales of what turned out to be cannabis.

The coast guard gave chase and fired a single gunshot into the engine of the boat and the men surrendered.

In addition to the drug, the law enforcement officers recovered a satellite phone.

All the men denied knowledge of the drug.

The men were represented by counsel Grant Connell, who asked the court to begin with a notional sentence of 7.5 years and to suspend the sentence.

He said that all of the men are marijuana farmers and have contributed to the 50 years of experience in that industry, about which the government now boasts.

In handing down his ruling, Justice Cottle noted that in St. Vincent and the Grenadines, the maximum penalty for possession with intent to supply a class B drug, which includes marijuana, is imprisonment of 25 years and a fine of up EC$5 million.

The maximum penalty for drug trafficking is imprisonment for life.

Justice Cottle noted that Baptiste has a criminal history and has been deported from Martinique twice — in 2012 after a two-year sentence and 2018 after serving a four-year sentence — for possession of cannabis.

Robin has no previous convictions.

Prince has four previous convictions, three of them for possession of cannabis, two of which the judge considered to be spent — having no bearing on future sentences for crimes he might commit.

However, the last conviction was in 2012 for possession of cannabis with intent to supply to another.

Sam has 16 previous convictions, three of them for possession of cannabis with intent to supply to another.

The judge said that from the record, all of the men, except Robin have chosen to follow a career in the supply of cannabis to others.

He noted that the aims of criminal sentencing are retribution deterrence, prevention, and rehabilitation.

The judge said he is also guided by the draft guidelines for sentencing for the crime.

Justice Cottle said that given that the quantity of the drug in the trafficking surpasses 2,000 grammes, it places the offence in category one of the guidelines.

He said Robin seems to have been the person who was in charge of the vessel and all of the men were involved in jettisoning the cargo once they realised that their apprehension was imminent.

He said that with no evidence to suggest otherwise, he is satisfied to treat all the men as having been intimately involved in the criminal enterprise.

The judge said the sentencing guideline suggests a starting point of two-third of the maximum sentence — 20 years.

The smaller amount would attract a smaller starting point of about 10 years, Justice Cottle said.

The judge identified the aggravating features of the case as the substantial quantity of the drug, and the street value, which he said is in excess of EC$1 million.

He said the men tried to outrun the coast guard and tried to dispose of the drug overboard.

He said that their operation so far offshore was an effort to avoid detection as the facts reveal that they were waiting there until it was dark to try to come on shore.

Justice Cottle said that none of the accused men pleaded guilty.

From his starting point of 12 and eight years in connection with the charges relating to the 907,546 grammes of cannabis, he moved upward by two years on both counts.

On the charges related to the 3,632 grammes, he began with starting points of three and six years and moved upward by three years.

He noted that Baptiste has been twice incarcerated for drug-related offences abroad and twice deported after sentencing.

The judge said that the location in which Baptiste was apprehended indicates that he has no intention of desisting from his chosen career and it was quite likely that the cannabis was bound for the French Antilles.

Justice Cottle said he gave greater weight to the need to deter Baptiste from his activities than the opportunity at rehabilitation. He, therefore, increased Baptiste’s notional sentences by three years on each count, which meant that the man was sentenced to 13 years, 11 years, 17 years, and 13 years.

The four weeks and four days spent on remand would be discounted from the sentence.

Robin has no previous conviction and, therefore, his notional sentences were decreased by three years on all counts. He was therefore, sentenced to seven years, five years, 11 years, and seven years.

Robin had only spent 10 days on remand and his sentence would run from his date of conviction.

Prince’s antecedent history was not as extensive as the others and the judge increased the notional sentences by one year.

Prince had spent three years, six months and six days on remand, which time is to be deducted from his sentence.

Sam, despite being the youngest of the men, has the most previous convictions.

Most of his convictions are for acts of dishonesty and several for possession of cannabis with intent to supply.

Justice Cottle said that in the circumstances, the concern of the court with rehabilitation carries less weight than other factors.

He, therefore, increased the notional sentence by two years on each count as Sam has never been incarcerated for drug possession.

Sam had only spent 11 days on remand, and his sentence will run from the date of his conviction.

The judge said that there is no evidence that the vessel was owned by the any of the men.

He, therefore, ordered that it be forfeited to the Crown, noting that no one has claimed it since it was in the custody of the coast guard.