“When I drop to the ground, he start feeding me with cuff,” the abused woman told the court. 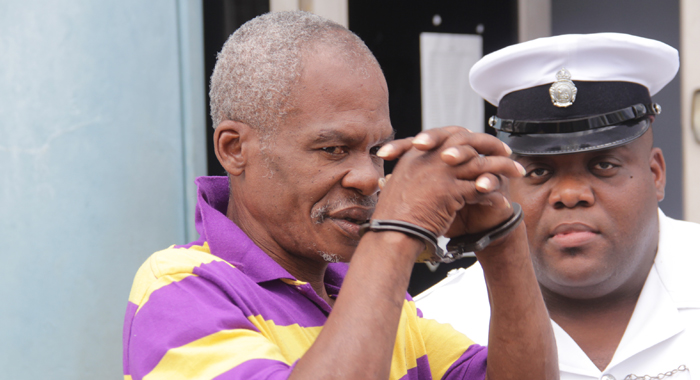 Woman beater Bertram Wright attempts to hide his face from journalists as he leaves the Kingstown Magistrate’s Court on Monday. (iWN photo)

For the second time in six months, a jealous man is to be sentenced for beating his lover after examining her vagina amidst accusations that she had been intimate with another man.

On Monday, at the Kingstown Magistrate’s Court, Senior Magistrate Rickie Burnett found Bertram Wright, 57, guilty of a charge that on April 20, at Kingstown, he assaulted his then girlfriend, Malina Charles, 53, also of Lowmans Leeward, causing actual bodily harm.

Charles told the court that she had left Wright at home to go to work as a cleaner at the Kingstown Market.

She was supposed to send back for him a bucket that she had forgotten in the city two days earlier.

The woman said she later met the man at the Leeward Bus Terminal and he accused her of having gone to have sex with someone else as she was not at her work place when he went there.

The duo has a child together, and Charles told the court that it was the second time that they were involved in a relationship.

When the relationship first ended, he spent some time in North Leeward before returning some years later asking for another chance.

She said that in the last three years that they spent together, he was repeatedly abusive and often accused her of being unfaithful.

The woman said that when he accused her of infidelity in April, she went into the restroom at the bus terminal, ensured that no one was inside and invited Wright to come in.

She said she took down her pants and underwear and told him to examine her vagina.

Charles told the court that Wright did so, by inserting a finger insider her, then proceeded to beat her, because of his findings.

“When I drop to the ground, he start feeding me with cuff,” she told the court.

The woman also suffered bruises during the ordeal and was treated at the Milton Cato Memorial Hospital, where Wright visited her.

She, however, ignored him when he visited her there, and filed a report with police.

For his part, Wright denied accusing the woman of being unfaithful and said it was she, who, without prompting removed her clothing and invited him to examine her.

He told the court that he went with her into the public restroom but refused to examine the woman, instead he scolded her for such behaviour in a public place.

“You say you dey[are in a relationship] with a man and that’s how you’re behaving in town?” Wright said he told Charles.

He said Charles than pulled up her clothes.

“Then the argument start,” he said, adding that the woman ran into him and they started “to wrestle up”.

“When we wrestling up, hand pass,” Wright said.

Asked if he was the first to hit Charles, Wright said no, telling the Court that both he and Charles “pelt hand together”.

Wright told the court that when they came out of the toilet, he was standing with his back turned to Charles when she took up a piece of 2’x2” lumber and struck him with it from behind.

He told the court he held on to the piece of wood and told the woman to behave herself.

By that time, onlookers had gathered and they told him that Charles wanted him to get him into trouble, Wright told the court.

He said he went home and told their grandchild what had happened and someone told him that Charles had gone to the hospital.

Wright said that when he visited her, she refused to speak to him, saying that she was going to report the matter to the police.

The detective told the court that Wright gave a caution statement saying that he and Charles had gotten into an argument and he “pelt two hand, she pelt two hand”.

In the statement, the defendant further said that Charles had picked up a piece of 2”x2” lumber and had struck him with it and that she must have sustained the bruises during what he said was a squabble.

Wright told the court that he was not pleased that Charles was not at work when he arrived but denied that that was the cause of the incident.

He, however, said that he concluded that she must have been delayed by conversation with her superiors but said that was not the argument.

“You put your finger in her vagina to see if it wet because you feel she went to brush with man,” the prosecutor told the defendant after the magistrate urged her to use language that the defendant understands.

In handing down his verdict, the senior magistrate said that the matter was a simple one and that he believed the complainant.

Burnett said he saw no justification in law for what Wright did to Charles.

The prosecutor told the court that Wright had convictions but they were not before the court and asked that the sentencing be adjourned to tomorrow (Tuesday).

Charles told the court that the relationship ended on the day of the beating.

However, Wright, who has been on remand since the charge, told the court that the relationship never ended.

Last December, Burnett jailed for three years a 26-year-old man who beat his girlfriend after accusing her of having sex in the office of a permanent secretary in Kingstown.

The man had pleaded guilty to the charge of assault occasioning bodily harm, stemming from the Nov. 30 incident.