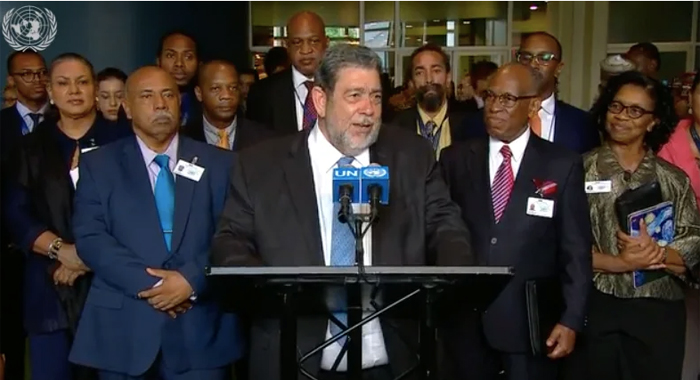 Prime Minister Ralph Gonsalves, speaks to the media at the United Nation last week as members of his delegation and staff at SVG’s UN Mission look on.

The Permanent Mission of St. Vincent and the Grenadines (SVG) to the United Nations will receive six additional staff members as the country prepares to take up a non-permanent seat on the UN Security Council next January.

Prime Minister Ralph Gonsalves made the disclosure on Sunday, likening SVG’s election to the United Nation’s highest decision-making body, as moving from county to Test cricket.

Currently, the mission has 11 staff members — 10 diplomats and one driver, Prime Minister Ralph Gonsalves said on Sunday, noting that eight of the diplomats are women.

“And the bulk of them are young people, products of the education revolution,” he told a welcoming ceremony at the Argyle International Airport on his return to the country after SVG’s successful election, last Friday, to the UN security council.

Gonsalves said that the current mission staff includes persons who also speak Spanish, Russian and there is also “a familiarity with Mandarin Chinese”.

“We have to send another six or so persons to our mission very shortly in preparation for our assumption of the seat on January 1st 2020.”

He said he has been speaking to Minister of Foreign Affairs, Sir Louis Straker about ensuring there are “high quality persons” to join the existing staff.

“And we will have here in St. Vincent and the Grenadines, and we have been preparing for it, interns, persons who we take on to help to man the post right here in Kingstown, because we are going to need a lot of persons who are following all the important issues at the Security Council.

“And if the Security Council is meeting on an important subject at 1 o’clock in the morning, we have to have at least one senior person and a junior person at the office so that if they have to get instructions from the foreign minister or the prime minister, they wake us and tell us what is happening on what positions and where there is any difficulty or any need for clarification.”

The prime minister said he has been explaining to the staff that “so far, we have been playing Shell Shield cricket at the United Nations.

Last October, Kingstown sent an additional six envoys to the United Nationsto assist with the lobby ahead of last Friday’s election.