‘And despite the eternal spring of hope within the human breast, I feel only despair at the prospect of rehabilitation for you.’ — Justice Brian Cottle 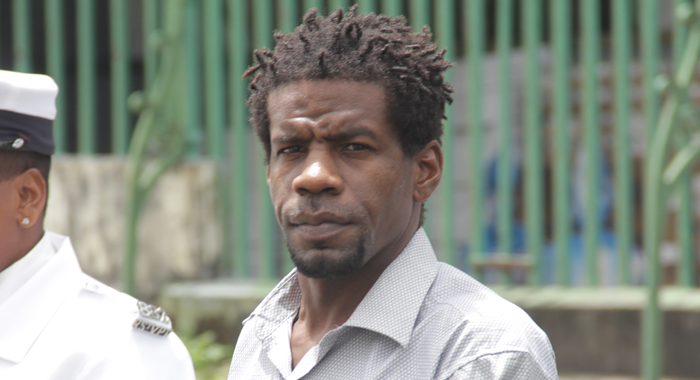 Desmond Browne, 42, has spent more time in jail than out. On Thursday, he was sentenced to spend a further 17 years behind bars for midday armed robbery in Kingstown five years ago. (iWN photo)

A man who recorded his first criminal conviction at age 14, then racked up nine more before he was first jailed three years later, has blamed obeah (witchcraft) for his life of crime.

For his latest crime, a high noon robbery, in Kingstown, in which he discharged a firearm at his victim’s head, Desmond Browne, 42, of Largo Height, will have to serve 17 years of his 30-year jail term.

According to the social inquiry report presented to the court, Browne offered obeah as one explanation for his life choices, Justice Brian Cottle said at the man’s sentencing hearing at the High Court, in Kingstown on Thursday.

Browne told the social worker who prepared the report that he had stolen money from a market vendor when he was a young man and the victim cursed him, saying he would never stop going to prison until he dies.

Justice Cottle said it appears that this belief has guided Browne’s life, as he seems to be trying to make sure that the female market vendor’s prophecy is fulfilled.

Last month, a nine-member jury comprised of six females and three males found Browne guilty that on March 27, 2014, in Kingstown, he robbed Desmond David of one gold chain, value, EC$2,000.

He was also found guilty of three other charges, namely, that on the same date and place, he discharged a loaded firearm at David; had in his possession a firearm, with intent to cause injury to David; and damaged one glass pane at Oriental Palace, value EC$165.

In mitigation, Browne, who did not have a lawyer, asked the court “for a little mercy, please”.

He said his mother has since died and he and his brother lived together.

The man said that his sister visited him in prison on Wednesday saying someone had broken into the house and stolen the flat screen television.

In handing down his sentence, Justice Cottle noted that Browne has been found guilty after a full trial.

The facts of the case are that the complainant was near Little Tokyo Bus Terminal shortly after midday speaking to a friend, when Browne went up to him and said “Yow!”

As David turned, Browne pointed a firearm in his face and pulled the chain from his neck.

Browne then pointed the firearm at David’s head and pulled the trigger, discharging a round.

The bullet did not strike David but broke the glass pane at the store.

Browne then fled the scene on foot and while doing so, he was observed by a female police officer and a former associate who happened to be in the area at the time.

He was arrested the following day but police never recovered the gold chain or the firearm.

However, the pendant from the chain was found near the scene of the robbery.

The judge said that the social inquiry report shows that Browne has a long criminal record of 26 previous convictions.

Most of those convictions were for theft and burglary, but he also had been convicted of threatening to discharge a firearm at someone.

He said that the complainant could easily have lost his life or someone else could have been shot or killed.

The gun has not been recovered, the judge further noted.

Justice Cottle said his search for mitigating features of the crime was “in vain”.

In considering the character of the offender, the judge said that Browne’s “career in criminality” began in 1991, when he was just 14 years old and was convicted for burglary.

The court imposed a sentence of corporal punishment.

“That clearly did not work,” Justice Cottle said, adding that three years later, after racking up his 10th conviction, Browne was imprisoned for the first time.

The judge said that looking at Browne’s record, it seems that he had spent more of his life in prison than outside

The last sentence was for 24 months imprisonment, beginning in 2017.

The judge said that the man’s record shows that his prospects for rehabilitation are slim.

“And despite the eternal spring of hope within the human breast, I feel only despair at the prospect of rehabilitation for you,” Justice Cottle said.

He said that the victim was a sailor who worked in various foreign ports and was especially traumatised to be robbed at gunpoint in his homeland.

After the robbery, the victim refused to leave his home for many months, the judge said, adding that he hopes that David has since benefited from some counselling and is showing signs of improvement.

David was overseas at the time of the trial and did not testify.

For the robbery, he sentenced Browne to 17 years in prison, five years for discharging the firearm at David, eight years for possession of a firearm with intent, and six months for damaging the pane of glass.

13 replies on “Robber blames obeah for life of crime”