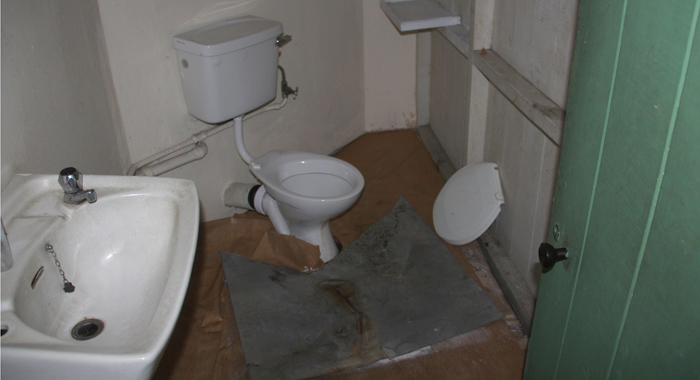 The rest room at the High Court building in Kingstown. (iWN photo)

For the second time in just under two years, the dilapidated conditions at the High Court building in Kingstown have come into focus.

Last Friday, at the closing of the assizes, lawyer Grant Connell spoke to the issue as he addressed the court on behalf of the private bar.

The lawyer said he had gone into the change room — where lawyers put on their cloaks before appearing before the court — and he had to be careful not to fall through the floor.

He said that sometimes when he parks in the courtyard, he has to jump over “water that is coming from–”

“Don’t say where the water is coming from,” advised Justice Brian Cottle, who was presiding.

iWitness News understands that the water is coming from the sewage system at the 200-year-old building, which the government said in April 2018 was in urgent need of repair.

Connell pointed out that the bailiffs sometimes have to stand for eight hours.

Connell further told the court that he recently attempted to use the bathroom on the ground flow of the building but there was no seat on the toilet.

He, however, said that while many lawyers come through the court, nobody is talking about the conditions there.

“That bathroom should be fit for the bailiff, the prime minister to go in and sit down. If he (prime minister) can’t go in there, no one should,” Connell said.

He said that the floor of the courtroom is woodlice-infested, adding that he bought a new suit last month but had to revert to the old ones as it was ripped in the building.

“I don’t know why lawyers don’t talk,” Connell said, adding that some will “take out the violin and play because they are afraid that others will talk about tax”.

Connell, however, said he can talk because he pays his taxes.

He said that the authorities can offer paid covered parking in the court compound, charging lawyers EC$500 a month to help to raise revenue for the upkeep of the building.

In his response, Justice Cottle noted the role of the media in covering the court and said that he hopes that, through the media, the lawyer’s comments will finds their way into the public domain.

In July 2017, the bathroom of the court building, where the wooden floor was severely rotten, was repaired after iWitness News reported that a witness in a court case had fallen through it.