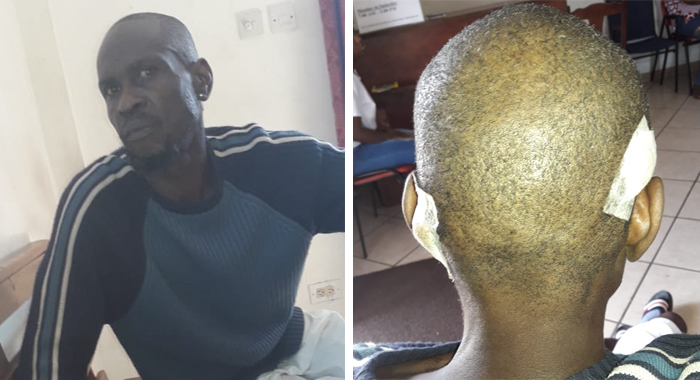 Cordel Nedd and the injuries he reportedly sustained at the hands of police.

A 52-year-old South Rivers farmer says he had to receive stitches for wounds to his head which he sustained when police struck him with the butt of a gun last Sunday.

Cordell Nedd said that the police beat him while he was handcuffed, although he had not done anything to provoke the beating.

Nedd’s story has been corroborated by Kenson King, a prison officer and resident of South Rivers, who told iWitness News that he witnessed the beating from his patio and made a Facebook post about it shortly after.

He said he had harvested from his farm $15 worth of tannia and sold the rhizomes to someone.

He said that when he delivered the produce, another farmer claimed the tannia, saying they looked like his.

The other farmer filed a police report.

Nedd told iWitness News that three police officers took him handcuffed to his farm and he showed them where he had reaped the tannia.

“Soon as I done show them where, is hand ah start to receive in my face,” the farmer told iWitness News.

He said the officer claimed that he said that he had harvested tannia from the area but it was eddoes that were reaped there.

“And they start to beat me. Is hand in my face; I can’t believe it myself,” Nedd told iWitness News.

He said his farm is not far from the village.

“Ah turn my face down to the village and ah start to cry out, to bawl out hard.”

He said one of the officers told the other that people would hear Nedd crying out.

“Ah can’t believe myself. Ah can’t do anything because my hand cuff,” Nedd said, adding that he was handcuffed throughout the whole ordeal.

Nedd said the police officer kept telling him to come up into the vehicle but he told the officer he was unable to, because he was handcuffed.

“He take the gun and he give me one lash in my back,” Nedd said.

He said when he got the blow in his back he had to support himself by jamming his back against one of the tyres of the vehicle.

He said that only he and that police officer were there at that time and the sergeant and the driver later came to the vehicle from his land.

He said that when the sergeant saw the left side of his head, he made a face and said, “Man, Colonarie station dun dey in ah situation with this same thing here and watch what you gone put us in again.”

Nedd said the sergeant started to cuss the abusive officer telling him that he had to take Nedd to hospital.

The police took Nedd to the Georgetown hospital and the wound on his right side took one stitch and the one on the left, two stitches to close.

“The one on the left side there, I can’t believe it myself, knock me out,” Nedd said.

The man also said he did not know that he could go to the Police Public Relations and Complaints Department, in Kingstown to file a report

He said that villagers had been telling him to do something about the beating, but he did not know what to do.

“Somebody was there and see what happen. A friend of mine, Kenson, he is a prison officer, he was at his home and see what happen. I understand he put up everything on Facebook at the same time. Because when we were down in the station, one the police girl come and say, ‘Watch here, look wha’ dun dey pon Facebook already’,” Nedd told iWitness News.

“He stop at home and he saw everything. Because at the same time he come down in the village and he tell people wha’ happen. He tell people that police nearly kill me for nothing at all, in my handcuff,” he further said of King.

“I was in handcuff. I couldn’t do nothing. And me ain’t give them no hard talk, me ain’t gi’ them nothing, no problem at all,” the farmer further told iWitness News.

“Ah cyah walk too far without sitting down,” he said of the effect of the beating.

Meanwhile, King told iWitness News that he saw the police officer strike Nedd with the butt of a gun, adding that his Facebook post is there to prove it.

“I saw when they brought him up from down by his land… When they put him to the back of the transport, they handcuffed him to the transport. So he was sitting in the pan of the jeep and he was handcuffed both hands, so it’s like they put the handcuff around the rail, the back rail and he was sitting there and the young police guy hit the man a gun butt. I saw him hit him. My mother and father were there,” King told iWitness News.

He said that when the police were driving past his gate they had to slow down near his gate and the young police officer was telling Nedd to shut up.

King said he guess the police are aware that he saw what happened because he put it up on Facebook.

“And that is why his daughter went and visited him and see what happen and his daughter even told me that he had two cuts behind his head…” he said of Nedd.

King said he only saw the police officer hit Nedd once.

Meanwhile, police have charged Nedd that between July 6 and 8, at South Rivers, he stole a quantity of mature tannias, value EC$250, the property of Winston Arrington, of South Rivers.

His next court date is on Sept. 5, at the Colonarie Magistrate’s Court, sitting in Georgetown.

Last week, iWitness News reported on three persons who were reportedly beaten by police. Two of the beatings reported came at the hand of female officers at a police station on the windward side of the St. Vincent, while a man said a police officer kicked him inside the Central Police Station, in Kingstown.