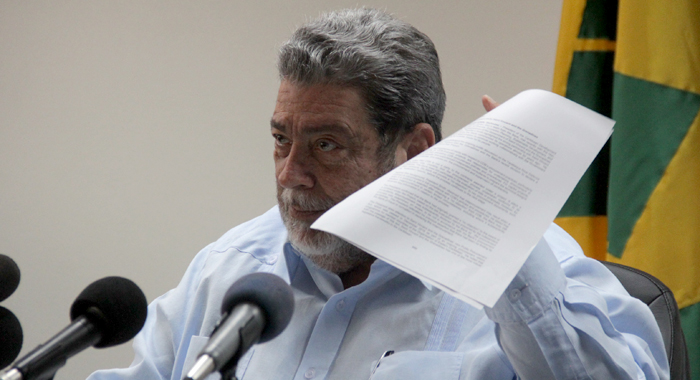 Prime Minister Ralph Gonsalves holds up a document at the press conference on Tuesday. (iWN photo)

Prime Minister Ralph Gonsalves says he is not saying there was a “false misprocurement” declaration in the Yarabaqua River Defence project even as he says he does not think that the Caribbean Development Bank should have declared misprocurement.

“I am not saying that there was a false misprocurement,” he said at a press conference in Kingstown, on Tuesday, in response to question about whether his government has asked the CDB if it can reverse its misprocurement declaration.

“All I am saying [is] that a misprocurement was hastily done, precipitately done, without seeking information from the various authorities, including the Government of St. Vincent and the Grenadines, and that the misprocurement on the face of it, in relation to their rule, doesn’t satisfy their rules, and further to that, their rules, their procurement rules, are not incorporated into the contract which they signed with us and that the rules are the rules of the tendering process in St. Vincent and the Grenadines. They can say, listen, we can suspend you having the money and having clarification, but you can’t take back the money like that. Not in that manner,” the prime minister said.

The prime minister’s comments came in response to a question from iWitness News at a press conference at which he and Minister of Finance, Camillo Gonsalves spoke about the CDB misprocurement saga.

“In light of all of the information that you and Minister Gonsalves have presented to us today, I think it stands to reason that one would ask if, in all of this, your government inquired about whether there is a provision under which a ‘false misprocurement’ was declared, that the CBD can reverse this.”

Gonsalves said he is a practical man of affairs and his government “has a lot of money dealings with the CBD”, with an indebtedness of close to EC$400 million and the CDB is actively considering providing the government with over EC$100 million for a new port in Kingstown.

“So I am not about to pick a fight over 1.4 million,” he said, even as he acknowledged that that there are several principles involved.

Gonsalves said he was stating his government’s position so that the CDB would hear and that he was writing them with all the positions he has crystallised.

“So that I will expect in the future, you will treat the Tenders Board with a little bit more circumspection. As far as I am concerned, this issue is now a closed issue with going forward with the project. What I want to know now is whether the NDP has decided to take up cudgel with Dinky Balcombe and Alison Balcombe instead of the Tobys in South Central.”

Asked if based on all the information he has and having looked at the CDB’s procedures, if he thinks that the CDB should have declared a misprocurement in this case, Gonsalves said:

“No. I don’t think they should have declared a misprocurement in this case; and certainly, not in the manner in which this was done. And, very interestingly, given all the rules, the entire legal framework, because there is a factual issue and there is a legal context,” said Gonsalves, who is also a lawyer.

After a review triggered by a complaint from Bally and Bally Investments Ltd., one of the unsuccessful tenderers, the CDB declared misprocurement in the Yarabaqua River Defence project and ordered the Gonsalves government to repay all the money drawn down for the project.

In his letter of objection, Cameron Balcombe, Bally and Bally’s managing director, said that Reliable Construction did not have the requisite experience and had been awarded the contract based on a false declaration or undue influence on the process.

Gonsalves has said the CDB declared misprocurement because Reliable Construction Services Ltd., the firm to which the contract was awarded, did not have the required financial information, access to financial resources, or specific experience.

“You want to tell me in the context of that, an official at CBD, without asking any further question of the Tenders Board, or asking any further question — they ain’t ask nothing of Reliable, according to information – [declared misprocurement?]. Well, if they don’t ask Jackson, is Reliable they going go to? I know it’s a good journalist question, but Reliable, as far as they are concerned, are so low down the food chain…”

The prime minister said he had also spoken with the CDB president via telephone.

iWitness News asked the prime minister if his government had inquired about whether there is any condition under which the CDB would reverse a misprocurement declaration.

He said that he could not speak for the CDB because the president of the CDB is above his pay grade.

“As I alluded to earlier, if they go and do a mea culpa, that [Director of Projects at the Caribbean Development Bank, Daniel] Best should not have acted so precipitately, should have consulted, get more information, get clarification, their lawyers may tell them, well, you may be opening yourself possibly to something.

“I don’t know. I can’t pronounce on that because I haven’t addressed my mind but I am only talking about it as a possibility,” the prime minister said.

The CDB declared misprocurement even after issuing a letter of “no objection”.

The bank, however, says:

“Even after the contract is awarded and after obtaining a ‘no objection’ from CDB, CDB may still declare a misprocurement if it concludes that the ‘no objection’ was issued on the basis of incomplete, inaccurate, or misleading information furnished by the Recipient of CDB Financing or the terms and conditions of the contract had been modified without CDB’s approval.”

Gonsalves, however, said that in its initial statement on the issue, the CDB issued on the development, the bank never constrained the limited circumstances under which they could overrule their no objection and declare misprocurement.

He, however, said that this changed in the CDB’s Aug. 15 statement, in which the bank said it can only declare misprocurement in limited circumstances including where it subsequently receives key information in relation to the process.

“Well, it has to be new information,” the prime minister said.

The prime minister noted that the recipient is the government and the contract is between Reliable Construction and the government.

“I want to know where the information is incomplete, inaccurate, or misleading.”