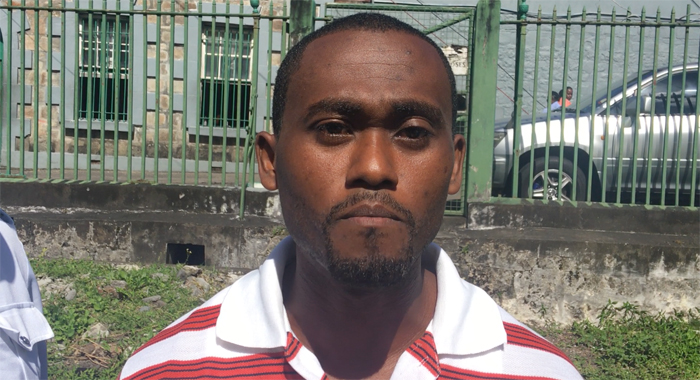 Eugene Noel on his way to prison to serve his 30-year sentence last December. (iWN photo)

The former police officer who was, in December 2018, sentenced to 45 years in jail for raping a 12-year-old girl has been indicted on another rape charge.

Eugene Noel, 33, along with Ricardo Miller, on Tuesday, pleaded not guilty to a charge that they raped a woman at Canash on Feb. 17, 2017.

Justice Brian Cottle had instructed a court clerk to put the indictment to the men when Noel indicated that he had something to say before then.

Noel told the court that he wanted to be arraigned before another judge.

However, Justice Cottle said there was no other judge handling criminal matters in the jurisdiction.

The judge, therefore, ruled that the application for recusal for the arraignment was denied.

Noel told the court that he had reasons why he wanted the judge to recuse himself but that he would rather not say it in open court.

The judge, however, explained to Noel that the arraignment was a trial, adding that he had told him the benefit of an early guilty plea because he was not represented.

For each arraignment on Tuesday, as had been the case, the judge explained to each unrepresented person that should they plead guilty, they could benefit from a discount of one-third on any sentence that the court imposed.

He further explained to them that the information was not intended to pressure them to plead one way or the other, adding that if they had a lawyer, the lawyer would have had an obligation to give them the same information.

In further response to Noel, Justice Cottle said it did not make a difference which judicial officer presides at the arraignment.

The men pleaded not guilty to the charge.
The judge told them that the court was not likely to get to their trial during the current assizes as there were too many matters on the list.

The matter was traversed to the January sitting of the court.

Miller’s bail was allowed to continue.

Karim Nelson appeared for the Crown

Earlier, Miller had told the court that counsel Grant Connell was representing him.

He said Connell had not attended the arraignment because he was in court.

“And here I thought this was a court,” Justice Cottle said.

The High court takes precedence over all other courts and lawyers are expected to attend that court ahead of any others.

However, when questioned further, Miller said he had not paid Connell to represent him.

Connell had earlier come to the court to say that he was not representing a man, as he had claimed.

He further informed that court that there was another accused man awaiting arraignment that day who was likely to make a similar claim, but that he was not the man’s lawyer either.

In December 2018, Justice Cottle sentenced Noel to 45 years in jail for unlawful sexual intercourse with a 12-year-old girl to whom he had given a ring and a cellphone.

However, he will only serve 30 years of that sentence, as some of the sentences will run concurrently.

Justice Cottle had handed down the sentences during a sentencing hearing in which Noel challenged his conviction and accused the jury of not considering all the facts in the case.

He continued to deny the girl’s claim and told the court of his practices during sex, saying that they differ significantly from the girl’s account.

Noel also used the sentencing hearing to attack the media, saying that media reports after his conviction had referred to past accusations against him of a similar nature.

Noel has appealed the sentence and has been denied bail pending his appearance before the Court of Appeal.

2 replies on “Rapist Eugene Noel on another rape charge”