Claimant will win once buggery case decided on law—lawyer 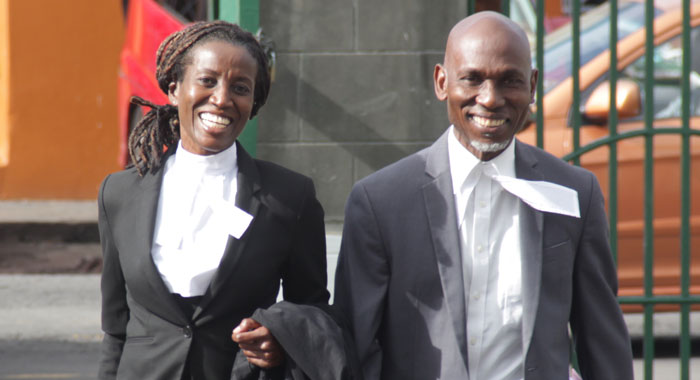 Jomo Thomas, left, and Shirlan “Zita” Barnwell, lawyers for the claimants, on their way to court on Wednesday. (iWN photo)

A lawyer for the two men challenging the constitutionality of the anti-buggery and gross indecency laws in St. Vincent and the Grenadines says his client will win once the case is decided on the law.

Jomo Thomas further told iWitness News that the churches, under the umbrella body of the Christian Coalition, might be setting themselves up for a public relations problem, by saying they hope to bring out 20,000 persons to a march in Kingstown on Thursday (today).

Gay Vincentians Sean MacLeish and Javin Johnson, who live in the United States and the United Kingdom, respectively, have filed a constitutional challenge to the anti-buggery and gross indecency laws in SVG.

“They are saying, and we agree, as counsel, that Sections 146 and 148 of the Criminal Code in St. Vincent is violative of their constitutional rights to expression, to dignity, to a number of constitutional provisions we believe are violated,” Thomas told iWitness News on Wednesday, after a pre-trial hearing in the matter.

The Attorney General, as the chief legal officer of the state, is the respondent to the claim, but 10 churches have argued to the court that they should also be a party to the claim.

The court will rule on this on Nov. 20, having heard legal arguments on Wednesday.

The churches, represented by counsel Meisha Cruickshank, are arguing that the state should keep the anti-buggery and gross indecency laws because of issues of public health and public morality.

Thomas, however, said the case is not about morality.

“This is not about morality and the claims that homosexuals cause the proliferation of HIV/AIDS and other sexually transmitted diseases cannot be supported by science… The case should be decided on the law, it should not be decided on morality,” he told iWitness News.

Thomas said a number of important cases on the same or similar issues, including in Belize, Trinidad and Guyana were decided on the law.

“And we believe that once the judges approach this case from a legal standpoint and look at the plethora of decisions that have come down across the world, whether we are talking about the United States, Fiji, Australia, the United Nations Human Rights Commission, wherever we go, the court has given little regard to the issue of morality for the simple reason that these are secular states, it is not a theocracy, and, therefore, people are not bound by issues of morality and the notion that the Constitution was made recognising the supremacy of God.”

Thomas said that in the decision of the Belizean Supreme Court, the judge made the point that the issue of the supremacy of God is only relevant to the extent that the state couldn’t be declared an atheistic state because the preamble said it is based on the primacy and the belief in God.

“So, on legal issues, we think that we are in good standing. We don’t believe that the issue of morality should play a big role. What we were concerned about going in, in terms of judicial efficiency and expediting the constitutional issues, is that we don’t have the case cluttered by the churches coming in and doing the kind of emotive things that they are doing now, as you see, for example, they are projecting to have this march tomorrow and I heard that they are hoping to get like about 20,000 people to come.

“I don’t know why they would want to say that because if they fall way short of that they have public relations problems. But that’s where it is.”

The march and rally are slated to take place in Kingstown today from 11a.m. to 1:30 p.m., under the theme “Calling Our Nation to Righteousness”.

The Christian Coalition says it will address five areas of national concern, namely, the LBGTQ challenge to the buggery laws of SVG, crime, the family — rape/domestic abuse, unemployment and mental health.

The march will start simultaneously at Girls’ High School Bus Stop and Little Tokyo and culminate at Heritage Square.

There will be Prayer Stops along the way at Peace Memorial Hall, Financial Complex/Police Barracks, Rose Place, Grand Bazaar/Paul’s Avenue Junction and the Court House.

One promo said that organisers are looking for over 20,000 people to be involved in the march.

But Thomas told iWitness News he thinks that the march by the church “really is an assault on the rights of another section of the society.

“The churches are Christian churches and the churches come from the new testament position of Jesus as love, Jesus for redemption and salvation, and for the church to call one section out of the society to demonstrate because another section of society is asking for the protection of its constitutional rights, akin – well, not akin to, but I thought Jesus Christ dealt with that fundamentally when he said he that is without sin cast the first stone,” Thomas said.

Meanwhile, Thomas confirmed to iWitness News that his chambers has been working on the case without payment.

“We haven’t received any money on this case. I hear people say that one of the reasons that I am resigning is that I really need the money and I have to do this. This is not a case that we have earned any money on. We have received no money on it as the press release said. We are indeed working pro bono,” he said.

Thomas announced last month that he will resign in early 2020 as Speaker of the House of Assembly, a post he has held since 2015. He also announced his immediate resignation as a member of the ruling Unity Labour Party and as its caretaker for the South Leeward constituency.