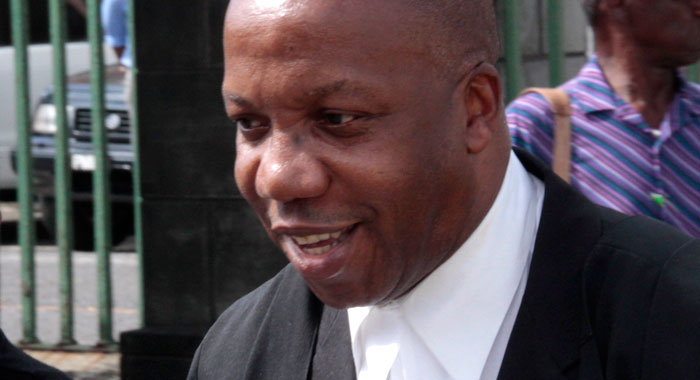 A magistrate says that while the world is gender-neutral the court tends to consider a convicted woman’s children when sentencing her, but not so for men.

Senior Magistrate Rickie Burnett made the observation at the Kingstown Magistrate’s Court, on Monday, as he sentenced a woman, who, in 2018, staged a burglary at her boyfriend’s house then reported it to the police.

As a result, Akitta Haywood, 28, of Murray’s Road was charged with giving false information to the police and stealing EC$15,000 in shoes from her boyfriend, Leif Joslyn, of Redemption Sharpes.

In November 2018, Haywood pleaded guilty to the false information charge and her boyfriend decided not to proceed against her on the theft charge.

At the sentencing hearing on Monday, Burnett noted that the charge was a new one for him, adding that the maximum sentence was three years in jail.

Haywood blamed frustration for her decision to steal her boyfriend’s collection of shoes and leave them in a garbage bin for someone to collect, then breaking a window at his house and telling police that a burglar had stolen the shoes.

She said she had acted that way because her boyfriend’s friend had told her that he was cheating on her.

“We have a gender-neutral world now but … when a man commits a crime, society treats it as though it is part of living, but when a woman does it, it looks terrible,” the senior magistrate said.

Haywood had told the court that she had two children, aged 10 and 9 and that they were at home that day because one was sick and they do not go to school without each other.

Asked who would take care of the children if she were to be sent to jail, Haywood said that her 42-year-old mother lives with her boyfriend who doesn’t want any children around.

“A young grandmother,” the magistrate commented.

Haywood further said her children’s fathers do not take care of them.

“You’re sure about that?”

The woman told the court that her current boyfriend takes care of the children.

Burnett said that the woman, who is self-employed importing and reselling items, cannot pay a fine as she has no resources.

“Sending her to prison, what is going to happen to the two children?” the magistrate reasoned but said he has to do something so that she can know what she did was wrong.

He told her to sit on the prisoner’s bench until the end of the day’s sitting.

“I will tell you if you are going to prison or not,” Burnett told a sobbing Haywood.

By the time the matter was recalled about an hour later, Joslyn’s boyfriend had arrived at court.

Joslyn took the stand and when Burnett asked him if Haywood was his girlfriend, he said yes and turned his face away from the magistrate.

“I was going to send her to prison and separate both of you,” the magistrate said.

Joslyn then told the court that he thinks that Haywood has learnt her lesson, adding that since the incident she has been remorseful.

“She has to consider herself as being lucky,” Burnett said.

The senior magistrate said that the defendant was lucky for many reasons, one being that “the way I am functioning now is not the way I was functioning before” — an apparent reference to the sentencing guidelines that the court must follow.

“And that is a fact,” Burnett said.

He said that Joslyn must pay a fine of EC$1,000, adding that the amount reflecting the seriousness of the offence.

“You are the man she was trying to damage?” Burnett asked Joslyn, who responded in the affirmative, adding that that is the reason he had turned away his face when he said he is her boyfriend.

“And you still love her?” he further asked, to which Joslyn again responded yes.

“What is love,” the chief magistrate said, triggering laughter by Joslyn and others in the court audience, whom court orderly Corporal David Wright quelled with a firm “Order in court!”

Burnett said he was not saying that Joslyn should not love Haywood, but he was merely pointing out the extent of love.

Asked who will pay the fine for her, Joslyn said, “the same person” — referring to himself.

When the magistrate announced the fine, “Joslyn said, “No problem.”

“How long you want to pay that?” Burnett asked.

Pay it forthwith,” the magistrate said and ordered Joslyn to step down.

As Joslyn exited the dock, he pulled several EC$100 bills from his pocket, counted the amount and handed it over to a court orderly for processing.

Joslyn and Haywood left the court together with Haywood using a shawl to hide her face from journalists attempting to take her photo.