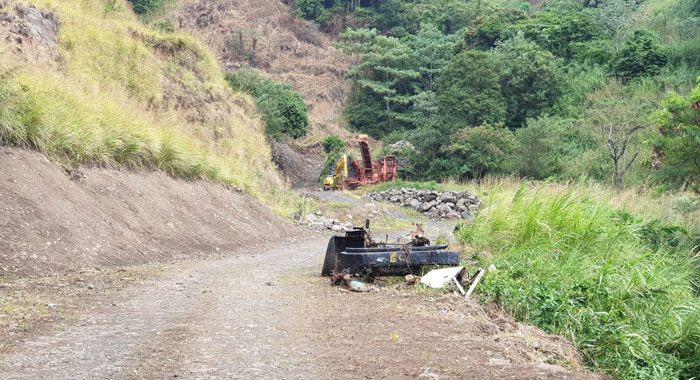 The area of Gibson Corner that the government is preparing for the location of the plants.

Member of Parliament for West Kingstown, Daniel Cummings, has joined constituents in opposing the location of asphalt and concrete batching plants in Gibson Corner.

The West Kingstown community has become the second since June to oppose the location of the plants in their communities, citing mainly health concerns.

Speaking in Parliament on Wednesday, Cummings, an engineer and opposition lawmaker, said that the construction of such plants requires many things.

He said that not least of these is a careful and in-depth environmental impact assessment by a group of professionally-trained, competent people.

Cummings, who shadows the Ministry of Health, said that apart from the obvious dust load associated with such a plant, a batching plant for asphalt generates fumes that are deemed to be toxic.

He said that the proposed location of the plant “in the heart of the catchment that is Kingstown — not just West Kingstown, [but] Kingstown — cannot be considered anything else but a deliberate insult to the people of this country”.

The opposition lawmaker, speaking during the debate on the Estimates of Revenue and Expenditure for 2020, said that his constituents have called upon him and he is going to act.

He said that he read a Jan. 13 letter/petition from constituents to the chief executive of Roads, Bridges and General Services Authority (BRAGSA), the state agency responsible for the plants.

In the letter, they say that the construction of the plants had been done without dialogue or consultation.

Residents further say that the situation with the plants in their constituency is “highly insensitive, high-handed and grossly disrespectful to the hardworking and peace-loving residents of West Kingstown.

“Your action has been done without dialogue/consultation with any of our residents. Would you place your family and those of your loved ones in such a situation? What you do not like for yourself. you must not hand out to others whom you believe are below you.

“We emphatically state here that we resent your actions. We are completely against your placing this plant in our area, and we ask that you immediately cease construction and take your plants to some other area where people do not reside,” the letter said.

They said BRAGSA was inconsiderate in its action “as this totally disregards the health risks associated with these plants”.

The residents told the CEO that he might not be aware that there are elderly residents and children in West Kingstown who suffer from ailments like asthma.

“We do not have to alert you as to the effects and medical issues that such a plant can have,” the letter said.

At a meeting, last June, Minister of Works, Senator Julian Francis told residents of Yambou, in South Central Windward, that his ministry would not locate the plant in their village in light of their concerns and objections.

BRAGSA had also begun to construct the plants there, without informing or consulting with residents.

In their letter, the West Kingstown residents said:

“Our area is not a dumping ground, as in June, the residents of Yambou rejected these plants.”

They said that the lands near to and around the plant would have “no agricultural or residential value, as no one will want to build a home nor plant crops near to it”.

They further said that BRAGSA has ignored the fact that there are several homes close to the site.

“There is also a nursing home in the area, while the children of some of the residents already suffer from asthma and breathing problems.”

And Cummings told Parliament that because of the elevation of the Gibson Corner location, fumes and dust and particles from such a location would radiate throughout the southern part of St. Vincent, engulfing all of Kingstown and Campden Park.

He said that with stronger wind, these fumes and dust particles would travel all the way to Questelles, Montrose, Largo Height, Redemption Sharpes, Green Hill and Dorsetshire Hill.

“The population density in these areas is one of the highest throughout the country and we want to put this kind of facility right in the heart of the prime living area in this country,” Cummings said.

“I don’t know if the fact that the people of Kingstown don’t vote for the government had anything to do with this because nobody who is right-thinking would even consider such and act,” Cummings said.

He noted that there is a nursing home at the entrance to the location of the plants, and that Government House — the official residence of the Governor General and the Official Residence of the Prime Minister are located in the vicinity.

Cummings also pointed out that the Botanical Gardens and the Anglican Pastoral Centre are within reach.

“Listen, I just hope, Mr. Speaker, that the concerns raised by the people of West Kingstown and voiced through me here will not fall on deaf ears.

“Because another community protests and it seems to me that that community is politically protected, so they moved it. But I want to give notice. I will challenge this to the end of the earth. It must not and it will not happen in West Kingstown. Will not happen,” Cummings said.

“I don’t know if when people feel they going to lose power they seem to lose all reason and act as though they don’t care. This kind of behaviour is the most callous, spiteful or baseless and ridiculous action anybody can thing about.

“Spiteful! This is to get to the people of West Kingstown and Kingstown in general because nobody of right thinking would even think of this this much more to go about saying you’re starting construction.”

2 replies on “MP, constituents against asphalt plant in Gibson Corner”