‘I forgive the world,’ Pastor Morgan says after being freed (+video) 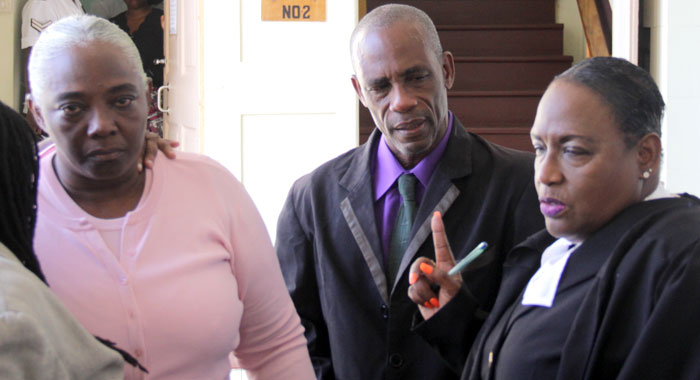 Althia Morgan, left, and her husband, Nigel Morgan, centre, speak with their lawyer, Kay Bacchus-Baptiste outside the court on Tuesday. (iWN photo)

Preacher Nigel Morgan, on Tuesday, continued his message of embracing Jesus Christ moments after the Court of Appeal set aside the 2018 conviction of he and his wife, Althia Morgan, on grievous bodily harm charges.

“Your media has exposed me internationally, so I wish to say, world, I’m coming to tell you that Jesus is Lord and those persons who have been rejecting him like how they rejected us, turn to him, because when he comes, they are going to be sorry,” the preacher and former teacher told the media after he was set free.

“I wish to encourage all Christians to continue praying because in prisons all around the world, there are people there who are innocent,” he said, moments after his own daughter, Krystal Morgan, was escorted to prison to continue a reduced sentence for the same offence that had also seen her parents incarcerated.

“I ask that you join me around the world and let’s pray for them. And those people who are doing media, I encourage you to continue to do your job and make sure that when you do your job that you do it to please the Lord. God is good,” Mr. Morgan said.

Mr. and Mrs. Morgan were freed after the court upheld an appeal of their conviction in connection with an April 2016 incident in which their daughter poured hot liquid from a kettle onto a man in a gutter outside their home in Hopewell, Marriaqua.

Her parents were holding and beating Cuthbert Victory, then 37, when Krystal poured the hot liquid, which resulted in first-degree burns to large sections of Victory’s body.

In the days after the incident and amidst public outcry after a video of the assault was circulated on social media, Mr. Morgan told iWitness News that his family was engaged in “spiritual warfare”.

The video was not tendered in evidence, but the Senior Magistrate Rickie Burnett had convicted the trio and sentenced them each, in April 2018, to four years in prison.

The magistrate rejected the prosecution joint enterprise arguments but convicted the trio under the principle of aiding and abetting.

Senior Prosecutor Adolphus Delplesche had appeared for the crown in the trial, while Kay Bacchus-Baptiste represented the Morgans at the trial and at Tuesday’s appeal.

Crown Counsel Karim Nelson appeared for the respondents on Tuesday.

Asked how he felt about the fact that his daughter had returned to prison, Mr. Morgan said:

“Let God do what he continues to. He allowed it, he has the final say.”

Asked if he had any regrets about the incident altogether, Mr. Morgan said:

Mr. Morgan said he spent his time in prison “teaching, preaching, counselling, and doing research –how wicked the justice system is in all the world.

“You will hear more about that. And I hope you, iWitness News would, when the time come, that you would help the world to know that there are people in there who need to be visited by their parents, parents have rejected their youth, loved ones have rejected one another there and those people are innocent. I’ve been writing a lot of appeals and bails — up to this morning.

“… I forgive the world, because God said he would blind everyone in the meantime until this time here. So you were blinded. You couldn’t see. But I love y’all and we forgive you. Love y’all,” Mr. Morgan said and kissed his hand as he made a smacking sound.

“Well, God is good. It takes a test to give a testimony. Go through the mess to bring a message and a lot of times, people talk. Talk is cheap. But when you experience something you could say I was there. The time I spent round there has been beneficial in many ways. You’ll hear about them.

Asked where do they go from there as a family, Mr. Morgan said:

“The steps of a good man are ordered by the Lord.”

Asked if it will be difficult to pick up the pieces, Mr. Morgan responded:

“Pick up pieces? There are no pieces. Those people who were called Shadrach, Meshach, and Abednego walked out of the fire unburnt. We are going out unburnt. Daniel came out without any broken bones. We are coming out with no bones broken. Krystal has a little job to finish and she will finish it. We pray that she will finish it and I know those ladies in there with listen to some of the things that she was telling them. We have had a lot of work doing round there too. And we will continue to pray. For those of you who work in prisons, thank you; continue to work.”

38 replies on “‘I forgive the world,’ Pastor Morgan says after being freed (+video)”