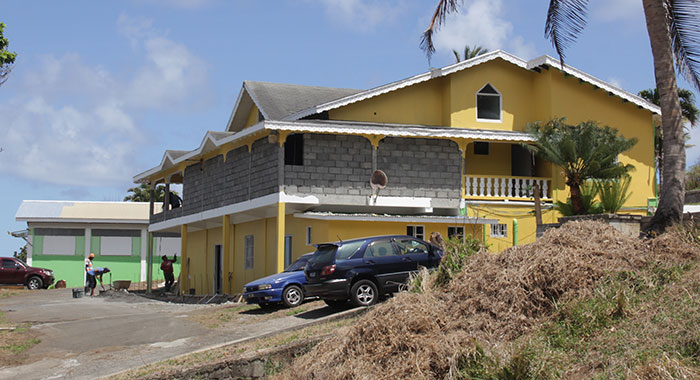 An opposition lawmaker is raising questions about why the government acquired a private property to convert to an isolation centre rather than using one of its own.

The lawmaker said she did not see anything “particularly appealing” about the two-storey building at Argyle “in terms of its ability to house the number of persons that may be necessary and something that you want to keep for future use.

“It’s upstairs and downstairs, as I said, not particularly large,” she further observed.

Bacchus-Baptiste, who has been identified as a candidate for the main opposition New Democratic Party in elections expected this year, said there are government-owned buildings that were more suitable.

“For example, I went and I looked at the agriculture building in Orange Hill on a large piece of land, a large building mostly unused,” she said, adding that the building was hardly used since being opened almost a decade ago.

“There’s just one office I see that is being used now; someone was doing something to do with bees. And I thought that that might have been a better site.”

Bacchus-Baptiste also suggested the property at Orange Hill where the Mental Health Centre was temporarily housed.

“There were three or four buildings in that area. And certainly you will not have a problem of whether it is isolated or not,” she said.

“To my mind, some of this money could have been used, if that is really, the reason why you brought it (lumber and cement) in — to assist in disaster — … to build and upgrade all the health services in St. Vincent, including the isolation building.

In the debate, Minister of Health, Senator Luke Browne said that his government had allocated EC$3.2 million for upgrade to and equipment for the isolation centre.

Bacchus-Baptiste said that the health minister might have been reading her Facebook posts, in light of comments he had made earlier in the debate.

Speaking earlier, the minister said that his opposition counterpart might be especially interested in a breakdown of the costs associated with the isolation centre.

“Well, first of all, there’s a need for us to purchase the property and the property was valued … there’s a lease-to-purchase arrangement with the former owner,” Browne said, adding that the Chief Surveyor valued the property at just under EC$1 million.

He said there was already a substantial building on the property.

“A building which was used, I think, to accommodate Taiwanese workers when they were in St. Vincent and Grenadines assisting with the construction of the airport. It had many rooms and many bathrooms. And so it was a substantial building,” Browne said.

He said there was also the cost of building out the isolation centre, according to his ministry’s vision and plan for the use of the facility.

“And I should say that it is a three-building facility. The initial building, which was there, had to be substantially retrofitted, and modified. And two other buildings are being constructed on that site as well and they were nearing completion in respect of all buildings being done.”

He said that the supplementary budget had allocated just about $1.7 million for the building work.

“I think there’s some leeway in that should there be some additional cost considerations, but it might be possible and we expect it to be possible for some savings to be made in respect of building out those facilities, of carrying out the construction of those three component buildings that will essentially constitute the isolation centre apart from this,” the health minister said.

He said that the construction and retrofitting costs, and supplies and equipment specific for the isolation centre, was projected at close to EC$800,000.

“This includes ventilators and the likes and everything that you essentially need for that facility to function very well. So we are looking at a total cost for an isolation centre, which will be a facility of use now and of use in the future for other reasons and for other purposes, is going to be delivered to the government for just over $3 million,” he said.

He said there are other costs associated directly or tangentially with the operations of the isolation centre.

For example, there was the purchase of a vehicle that will be used to transport staff who work at the isolation centre, including and especially the Cuban medical team that is in SVG to assist with the pandemic.

“There’s also provision for accommodation for the Cubans, locally, and also for the local staff, which would be also working at the isolation centre.”