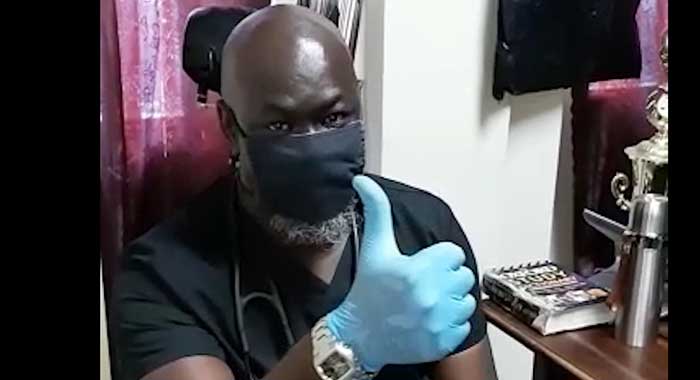 UPDATE: Dr. Wayne Murray was released around 4:15 p.m., without charge, his lawyer, Vynnette Frederick has confirmed to iWitness News.

“I AM FREED FROM BEING DETAINED FOR THE DAY!First I must say thank you to the every persons that gave support. The numerous lawyers, family, friends and patients whom I had to leave at the clinic without attendance.I WILL MAKE A PROPER POST TONIGHT BUT I HAVE A FEW PATIENTS THAT I MUST VISIT IMMEDIATELY!!!THANK YOU!!”

The physician whose family is the subject of what they have described as a “communist” land acquisition in St. Vincent and the Grenadines was taken into police custody on Tuesday.

Vynnette Frederick, a lawyer for Dr. Wayne Murray, told iWitness News round 3 p.m. that police had not brought any charges against her client and had not indicated why he was taken into custody four hours earlier.

Murray was taken into custody when detectives turned up at his clinic on Murray’s Road around 11 a.m. and told him that the Commissioner of Police, Colin John, wanted to see him at police headquarters, the lawyer said.

“Dr. Murray has been — I would like to say, detained at the Central Police Station. He is upstairs at the CID. As yet, charges have not been laid against him,” Frederick said.

She told iWitness News that she, along with lawyers Grant Connell and Kay Bacchus-Baptiste, were acting on behalf of the physician, while other lawyers who are his personal friends have also visited him.

“But, so far, no charges have been indicated to us. I am here with him in an interview room — one of the senior officer’s rooms. He is not being treated unkindly. His wife has come and been here with him and we are waiting to see what position the police are going to adopt,” Frederick told iWitness News.

“There seems to be some issue with an allegation of a post appearing on Facebook. I can’t speak to that because the police have not proffered any charges in relation to any allegation whatsoever.”

In a 23-second video, said to have been taken at police headquarters and circulated via social media, Murray is seen dressed in black medical scrubs and wearing a facemask, and blue latex gloves. He also has a statoscope around his neck.

“I’m ok, guys; just waiting and see why I am here. But I don’t except them to keep me too long. I’ll wait and see,” Murray says in the video.

Frederick said that when the detectives arrived at Murray’s clinic, they gave him “that typical line” that the police chief wanted to see him at headquarters.

“The police have this way of arresting someone. I don’t know that he was told on suspicion of what and under what legislation.

“And so, we are here, I don’t know what, if any investigations are forthcoming and I am here waiting to hear what the police are saying. Other colleagues are currently speaking to the police. And this is what it has been from 11 o’clock to now.”
Frederick said she does not know what was allegedly said in the Facebook post, adding that she had not herself seen a post on the social networking website.

iWitness News was told that the police have detained Murray as part of a cybercrime investigation.

Meanwhile, Frederick referred to the state’s compulsory acquisition of part of the Murrays’ land.

“The matter that comes to mind most strikingly in relation to the doctor and his good wife is the issue of the land belonging to the family in the Murray Village area. I have not heard from the police as to whether it (the detention) touches and concerns anything about that. And so we are waiting and I am here with him.”

Dr. Murray has been using social media Facebook amidst his on-going appeal to the Ralph Gonsalves government to resolve a situation it reported exacerbated with its forced acquisition of the lands.

He has told iWitness News that the prime minister called him and the police chief and other officer visited the area in Murray’s Village after he made a public appeal on radio last month.

The lands acquired by the state had been in Murray’s wife, Simone’s, family for 100 years and her family had been leasing portions of it for homes for decades.

However, as the family recently moved to enforce years-old court orders for the tenants to vacate the land, the government acquired an undefined portion of the land.

Mrs. Murray told iWitness News last month that even in the face of the acquisition, the government had not said which portion of the land had been acquired, beyond saying that the state was taking possession of some three acres.

The state has also not said how much it would pay the family for the land it had acquired.

Since the acquisition, Dr. Murray has said on social media that the former tenants were trespassing on the section of the land where his family’s home is located and were stealing their agricultural produce.

Theft of agricultural produce was one of the reasons that the family had given for ordering the tenants to vacate the property.

The Murrays say they want to concentrate more on agriculture, growing more of what they eat, as Mrs. Murray is a cancer survivor.

Mrs Murray has told iWitness News that some of the tenants have refused to pay for years the rent for the land, which ranged from EC$50 to EC$300 annually.

Dr. Murray has said on Facebook that when confronted about his trespassing and praedial larceny, one former tenant told him that the land no longer belonged to the Murrays.

The physician has said that the former tenants had begun to stake out parts of the land as the portion they would occupy in light of the acquisition — even in the absence of a survey plan, as required by law.