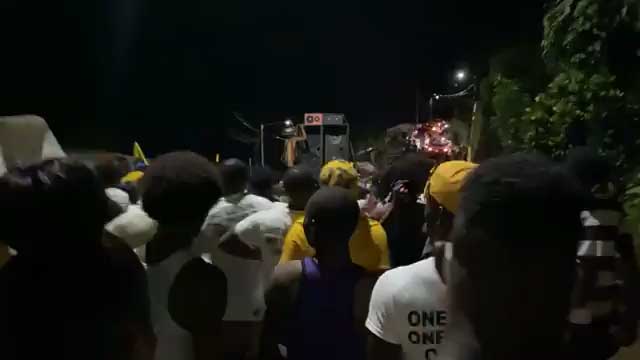 The main opposition New Democratic Party (NDP) is calling for a police investigation into an “attack”, in Rillan Hill, on its supporters during an election event Tuesday night.

Hundreds of NDP supporters were having a street parade, accompanied by amplified music, from Campden Park to Retreat, Vermont, where a rally was planned.

While the crowd was passing through Rillan Hill, another South Leeward community, around 8:20 p.m., six gunshots rang out, sending the crowd scampering.

In a video comment on the incident on Wednesday, Opposition Leader and NDP president, Godwin Friday condemned the incident as  “a clear attack on the NDP and our supporters”.

Friday said that stoned were through at a truck that was part of a procession.

“Rocks struck the windscreen of the truck and nearly caused it to run off the road,” the opposition leader said, adding that at least one person was injured, but offered not details about the injury or the status of the person.

“Gunshots were heard – causing fear and alarm among the supporters.

This was a clear attack on the NDP and our supporters, intended to suppress our activities,” Friday said.

The opposition leader said this is not the sort of thing that the NDP expects in St. Vincent and the Grenadines.

“It is completely unacceptable,” Friday said, adding, “I call on the ULP to denounce this attack and we call on police to investigate it fully and independently and inform us of the outcomes.

“They must take all measures to prosecute those involved and to protect the supporters of all parties.

“Let me be clear, the New Democratic Party will not be intimidated or frightened by those who wish to attack us. We will conduct our campaign and we will be out there with the people, every day until the polls close,” he said.

“Our elections must be peaceful and lawful. We agreed to as much when we signed Code of Conduct,” he said, referring to the accord that the NDP and the ruling Unity Labour Party signed last week.

“Unfortunately, after 19 years of ULP governance we have a climate of fear, tension and lawlessness in our beautiful country.

“We must put an end to these things. We must get our country working.

The NDP is building a movement, our tent is large, it is large enough for everyone.

“Our people need real and lasting change to get our nation working.

That will never come through rocks and bullets.

“In politics, and in every other aspect of life, we must all remember we are one people, we are one nation.”