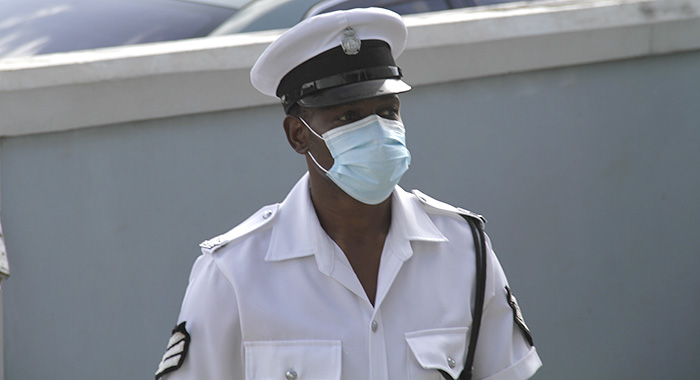 The police officers who went to the home of Cornelius John on April 13 were responding to a report of a domestic dispute, but met John with a gunshot injury, the sergeant of police who led the team told the Morgan/Nelson trial on Nov. 15.

Sergeant 729 Daniel Prescott took the stand at 3:24 p.m., Day 4 of the trial of Karim Nelson, an assistant director of public prosecution, who was charged that on April 13, at Diamond Estate, he unlawfully and maliciously wounded, and unlawfully discharged a firearm John.

He was tried alongside Ashelle Morgan, a lawyer, government senator and deputy speaker of the House of Assembly, who was accused of assaulting John, by pointing a gun at him.

On Day 2 of the trial at the Mesopotamia Magistrate Bertie Pompey ordered the media not to publish any further reports on the evidence of the case until the trial was completed.

On Nov. 18, the magistrate upheld no case submissions and acquitted Morgan and Nelson, paving the way for the media to report on the evidence in the trial.

In his evidence-in-chief, Prescott told the court that he is attached to the Calliaqua Police Station, as had been the case on April 13.

He recalled that on April 13, about 5:20 p.m. he was at the station when Corporal 544 Scarborough informed him of a domestic report at Diamond.

“With the assistance of PC 952 Toppin, along with a party of men, I decided to respond to that report,” Prescott said.

He told the court that the police vehicle was out on duty so he was waiting for it to return to the station.

“I realised that the police transport was taking some time to get back so I decided to use my personal vehicle and responded to the report,” Prescott told the court.

“On arrival at Diamond, I met and spoke with Auxiliary Police Constable Franklyn. I then went by an unpainted wall structure house and there I saw a man sitting under his porch with his legs stretched out. I subsequently found out the man’s name to be Cornelius John, of Diamond. I spoke with him and he told me certain things.

“I spoke with him and he told me — trying to remember the exact words — he told me that Ms Morgan brought her people to kill him,” Prescott told the court, having been allowed, under the res gestae rule to tell the court something that had been said in the absence of the accused.

“I can’t recall if he told me any other thing. I observed that he had an injury to his left leg and blood was coming from same. He told me he was shot. I called the station for the officer to get on to the ambulance.”

Prescott said that while waiting for the ambulance, he “decided to scan under the porch or verandah, the yard, and while scanning, PC 952 Toppin called me and showed me what appeared to be a 9 mm spent shell. That was in the porch area on the step. PC 952 Toppin took up the spent shell and kept it in his possession as exhibit.”

The sergeant said that he later contacted the station about the location of the ambulance, and decided to take John to the hospital.

“With the assistance of PC Toppin and a party of men, I assisted Mr. John in placing him in my personal vehicle and left the scene for the station.

“On arrival at the station, I met the police transport. Mr. John was then taken out of my personal vehicle by the police and transferred into the police vehicle.”

The prosecutor, S. Stephen Brette, who is deputy director of public prosecution in St. Lucia, and who was contracted to prosecute the matter, asked Prescott to demonstrate how they transferred John to the vehicle.

“Mr. John was embraced. He had to place, I can’t remember if it was his left hand or right hand on my shoulder, he had to be embraced and placed in the vehicle,” Prescott said.

“Was he embraced on both sides of his body?” Brette asked, and the officer responded in the affirmative.

“Did you see him walking on the leg in which he got shot?” Brette further asked.

He told the court that Franklyn was there all the time that he was on the scene.

Prescott also told the court that on June 6, about 11:45 a.m., he went back to John’s home along with detective Corporal 858 Hoyte and PC Quammie.

He said that there he met John and his lawyer, Kay Bacchus-Baptiste.

The court granted Brette’s application to show Prescott the photographs that Quammie had taken, which had already been tendered in evidence.

Prescott identified John in one photo and, in another, pointed out the step where Toppin had shown him the spent shell.

“Where did you find it?” Brette asked the officer.

Brette asked Prescott to turn his back so as to not see all the photos as a court officer skipped through them. He said this was in the interest of fairness.

Prescott was then asked to look at the photos and to tell the court where in John’s yard they had looked on the night of the shooting.

The officer said that he had looked at the front of the property and pointed out where a flower (plant) is, as well as to the right of the building and also under the porch.

He said he did not discover any other spent shell or a cutlass.

“When you got to the house and saw the gentleman with leg stretched out, did you see him with any cutlass or anything in his hand?” Brette asked.

Responding to Marks’ question, Prescott said that April 13 was a few days after La Soufriere volcano erupted on April 9, followed by eruptions on April 10 and 12. The officer said that there was a lot of volcanic ash in the atmosphere.

“And the police, you agree, were very busy around that time?” Marks asked.

“During that period and every day, your honour,” Prescott responded.

He agreed with the lawyer that the police had to provide security at shelters and their leave was suspended.

“Do you know what time the call reporting the domestic issue came in?” Marks asked Prescott.

The officer said that he did not check the diary and that he received the report of the domestic incident at 5:20 p.m.

Prescott said he could not give the exact time of when he left the station in his vehicle.

“No please,” the officer responded.

He was shown the diary and he told the court that it said that they departed at 6:41 p.m.

He said that when he left the station he went directly to Diamond Estate.

The officer further denied saying that he left the station immediately on receiving the report.

Prescott was shown the statement he made in connection with the incident and the lawyer drew his attention to the third line.

Prescott told the court that he could not say the exact time when he departed the police station.

He said that, depending on the traffic condition, it takes about 10 to 15 minutes to drive from Calliaqua to Diamond, and that he went directly to Diamond when he left the station.

Marks suggested to Prescott that the time the station entry indicating that he never left the station at 5:20 p.m. was correct.

“That would be stating a falsehood, your honour,” Prescott said.

Marks told the officer that if he had left at the time that he stated, he would have arrived before the shooting incident took place.

Prescott responded that he never gave a time when he left the station.

“What do you mean by ‘immediately’?” Marks asked the officer.

“I said I immediately boarded my vehicle along with my party of men. There was no time there to say when I arrived,” Prescott said.

He told the court that when he arrived at the scene, he met several people there.

“Did anybody remove a cutlass from the scene when you were there?”

“Not to my knowledge,” Prescott said.

He said he did not go into John’s house.

“But you did not search the area for a cutlass?” Marks said.

“I searched the area for any object.”

Prescott said he “never checked the time” when he arrived at Diamond but it was “not all that dark”.

“But street lights were on,” Marks said.

“Maybe or maybe not,” Prescott responded.

“But you all didn’t have to use light?

“I had no light,” the officer said, adding, “Phone lights were used but that could have been because of the length of time we stayed there waiting for the ambulance to come to assist.”

Marks put it to Prescott that the shooting incident, according to the prosecution, happened sometime between 6:30 and 7:15 that night.

The prosecutor rose and told the court that Prescott would not know that.

“He wasn’t there and wouldn’t know that,” Brette said.

Marks suggested to Prescott that he arrived there after 7 p.m.

“Like I said, I never checked my time when I arrived there,” Prescott responded.

Marks further put it to the officer that it was “dark, totally dark” when he arrived at the scene and that the sun had already set.

“The sun setting does not necessarily mean that the place will be dark, dark, dark. Maybe the sun would have already set. I never took note of that,” Prescott said.

Marks asked Prescott if Franklyn was the one who found the spent shell.

Prescott said it could have been “45 minutes to an hour or even more” after he arrived at the scene that he put John in his private vehicle.

Marks suggested that the station diary is correct that Prescott left the station at 6:51 p.m. and returned at 7:55 p.m.

Marks ended his cross-examination at 4:29 p.m.

There was no re-examination of the witness by the prosecutor.