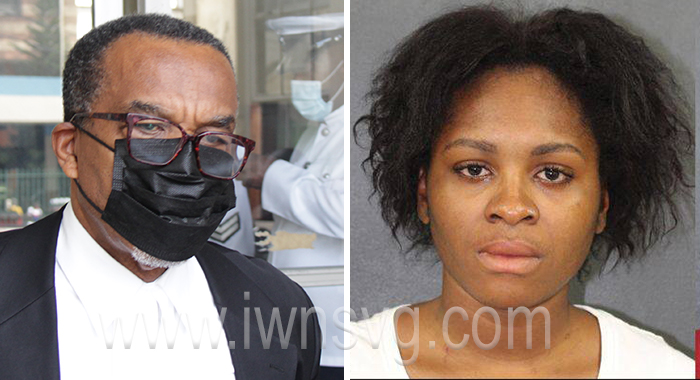 A composite photo of Defence counsel Michael Wyllie, left, as he leaves the High Court on April 8, 2022, and a 2017 police photo of the accused, Twanecia Ollivierre.

Lawyer Michael Wyllie, on Friday, asked the High Court to remove him from the record as defence counsel for a woman who was accused of murder but pleaded guilty to manslaughter.

The lawyer maintained that his client could argue self-defence in the matter, but the accused, Twanecia Ollivierre, told the court that she did not want to change the guilty plea she had entered on the manslaughter charge.

Ollivierre, 19, of Chapmans, along with Alana Hudson, a, secretary of Campden Park, and Taylor Mofford, 18, unemployed of Belmont, were charged with murder in connection with the Sept. 4, 2017 death of Simonia Da Silva, 23, of Fair Hall.

After negotiations with their lawyers, Duane Daniel (for Mofford), Kay Bacchus-Baptiste (for Hudson), and Michael Wyllie (for Ollivierre), the Crown decided to reduce the charge to manslaughter and each of the accused pleaded guilty.

The sentencing was set for Friday, before Justice Brian Cottle at High Court No. 1 in Kingstown.

Tamika DaSilva-McKenzie appeared for the Crown.

When the matter was called, Daniel told the court that he saw “nothing of material derogation from the facts as presented by the prosecution”.

Bacchus-Baptiste also had no “major dispute” with the facts.

However, when Wyllie spoke, he told the court that he had made a submission two weeks earlier, and having received the Crown’s submission, he had a dispute as regards what the prosecution had presented as the facts in the matter.

“This is clearly a case of self-defence,” Wyllie said. “Ms Ollivierre didn’t start the fight. She was pulled into the fight by the deceased.”

He made some allegations about the mother of the deceased and her boyfriend saying that because the dispute involved his clients’ friends, “she just went along to see what was going on.

“They ended up outside the deceased’s home and the deceased held on to Ms Ollivierre and pulled her into the yard, where the flight took place.”

The lawyer alleged that the mother of the deceased and her daughter “introduced the weapons into this fight”.

However, Justice Cottle asked the lawyer what the court was to do in circumstances where there is a sentencing exercise “and the facts, as you are presenting them to me, clearly amount to a complete defence.

“And since there is a conflict, what is the court to do?”

The lawyer said he had made a submission to the director of public prosecution about the facts.

He said he thought the DPP’s office would have gotten back to him and come to a decision about the facts.

“If you read the prosecution witnesses—” Wyllie was saying when the judge told him that the court was not going to be deciding on factual conflicts.

“That is not how this operates.”

At this point DaSilva-McKenzie rose and told the court that to her mind, the facts, as Wyllie presented them, “amount, in law, to a complete defence in murder”.

She suggested that Ollivierre’s guilty plea for manslaughter be vacated and the matter go to trial.

“Self-defence is a complete defence and it is a question for the jury to determine,” DaSilva-McKenzie said.

Wyllie said that was his position from the beginning but his client did not want to continue with the matter and opted to plead guilty to manslaughter.

The judge said that the law compelled him to enter a not guilty plea on Ollivierre’s behalf.

DaSilva-McKenzie confirmed that a trial of Ollivierre would take place.

“And that is on the substantial matter,” the prosecutor said, referring to the original murder charge.

At this point, Ollivierre began to cry and Daniel urged Wyllie to speak with his client.

“It is now a murder trial,” Daniel told his colleague.

“Daniel further asked if the matter could be stood down and Justice Cottle indicated that before making an order, he would rise for a few minutes.”

During the suspension, Wyllie said in the courtroom that he was not going along with his client pleading guilty to manslaughter.

“If she wants another lawyer, then so be it,” he said.

When the court resumed, Wyllie told the judge that after conferring with the accused, she agrees with what he said.

“However, she wants to get the matter over with,” Wyllie said, adding that he was “not prepared to go along with the prosecution’s submission.

“Therefore, I am asking to be excused to allow the defendant to get another lawyer.

After spending four and a half years pro bono on the matter, giving my service to the accused, I cannot go along with what the prosecutor has here,” Wyllie said.

Justice Cottle told the lawyer that his client had given him instruction. He asked Wyllie if he disagreed with those instructions because he knew better about the facts.

The lawyer, however, said that he knows what is in the documents presented by the prosecution.

“This entire submission is based on what the deceased’s mother said. There are witnesses who contradict what she is saying, clearly — the prosecution witnesses.”

He said that in his submission to the DPP, he had indicated that the Crown had not mentioned one word of what any of those witnesses said.

But the judge told the lawyer that he was not going down that road with him, adding that it was not the court’s function to evaluate what witnesses say and which witnesses a jury might believe.

“The jury will listen, as in every case, to many witnesses, who, quite often, give conflicting versions. The beauty of the justice system is that the jury decides which witnesses to accept, how much, and the facts.”

The judge said that sometimes he looks at depositions and he forms a view of which witnesses he might have believed and the jury decides otherwise but he does not try to substitute the jury’s view with his.

“On what basis did the prosecution rely only on the mother’s account of what happened?”

“I see that I am not communicating clearly this morning. So I will stop there.”

He, however, said that as a practical matter, at that 11th hour, Wyllie was asking the court to allow him to withdraw from the case and appoint someone else.

Justice Cottle said that a new lawyer would need time to familiarise himself with papers, take instruction from Ollivierre and offer professional instructions to the court.

“The facts mentioned by the prosecution, in my estimation, are to increase my client’s sentence,” Wyllie said.

“Mr. Wyllie, you have not been indicted. And so you are not called upon to plead.”

Wyllie, however, said that his position has little to do with the accused’s account of what happened only.

“The facts mentioned here, in my opinion, are designed to increase the sentence of the accused with a bunch of misstatements, erroneous facts.”

‘I don’t wish to change my plea, please.’

The judge, addressing the prosecutor, said that it appeared that he was compelled to enter a not guilty plea.

DaSilva-McKenzie told the court that during the break the defendant had indicated that she wanted an audience with the court.

The judge asked the clerk to read the indictment to Ollivierre again.

As the clerk was about to do so, Ollivierre stood and said, “My lord, I don’t wish to change my plea, please.”

“Alright, thank you then. But still, I will need somebody to represent you in mitigation.”

He told Ollivierre that the next lawyer on the list was Patina Knights, adding that he could not proceed with the matter unless Ollivierre has a lawyer.

The judge told the accused woman that he would send the letter to Knights that day and the lawyer would contact her.

“I had hoped we would have been through with this matter before the [Easter] break. I don’t know what Ms Knights’ schedule is like and if she will feel comfortable dealing with the matter.”

Daniel then told the court that he and Knights are before the court this coming week in a sentencing matter.

He asked the court for five minutes to contact Knights to verify whether that would give her enough time.

The hearing was suspended for a few minutes and during the break, Wyllie left the courtroom, taking his papers and bag with him.

When the court resumed, Daniel stood and apologised for Wyllie’s absence.

“I have no proper explanation save and except to advance, at the risk of giving evidence from the bar table, that he was seen heading to the parking lot with his papers,” Daniel told the court.

“I would like to believe he misunderstood what transpired regarding another counsel, and he was under the impression that an order was made and he was excused.

“I offer that apology, just in case there was a misunderstanding.”

Daniel then informed the court that Knights had said that the time would afford her an opportunity to take instruction and mitigate on Ollivierre’s behalf.

The lawyer said he was willing to expedite the matter by giving Knights an electronic copy of the papers.

He said that he would need the court’s help in obtaining a copy of Wyllie’s submission.

The clerk passed a copy to him and Daniel confirmed to the court that he was in receipt of it.

Justice Cottle then said that at Wyllie’s request, the order appointing him as Ollivierre’s counsel was revoked and Knights appointed.

He said that so that the court would not lose that day’s hearing, he was content to hear mitigation on behalf of Hudson and Mofford.

The next hearing in the matter is set for Wednesday, when the judge will hear the mitigation on Ollivierre’s behalf.

The sentencing of Mofford and Hudson is scheduled for that day also. Justice Cottle also said he would try to complete Ollivierre’s sentencing on Monday.