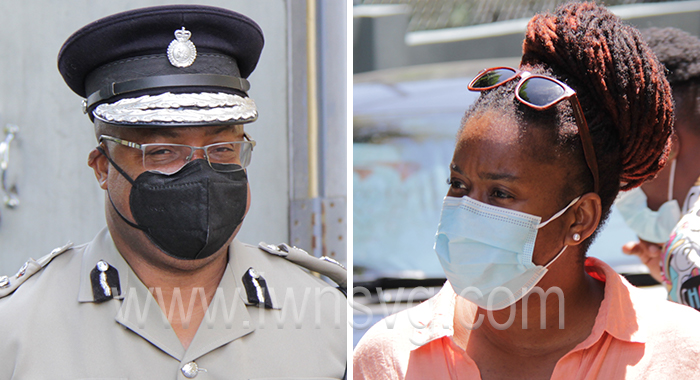 A composite photo of Commissioner of Police Colin John, left, and the accused, Zuleika Lewis outside the Serious Offences Court.

A teacher has been acquitted of two traffic charges in a case in which Commissioner of Police Colin John was the sole material witness.

Chief Magistrate Rechanne Browne handed down the not guilty verdicts at the Serious Offences Court, on Wednesday.

The teacher, Zuleika Lewis, was tried at the same court on Feb. 23 on charges that on July 24, 2021 at the Carriere Public Road, she:

— being the driver of motor vehicle PD167 did wilfully allow the said vehicle to stand on such a road so as to cause unnecessary obstruction to free flow of traffic; and

— did fail to remove the said vehicle when requested to do so by a police officer when it was placed in such a position so as to cause obstruction to the free flow of traffic.

Lewis testified in her defence and rebutted the police chief’s version of what transpired.

Commenting on the outcome of the case, her lawyer, Alexei Charles, told iWitness News:

“An obstruction is caused by any unreasonable use of a road. Whether an act is reasonable is a question of fact for determination by the court.

In his evidence, the police chief said he was travelling along the Carriere public road near the New Testament Church when he saw an obstruction.

John said that as commissioner of police, he alighted his vehicle and approached the driver of PB167, which was causing the unnecessary obstruction.

He said that as a driver and given the size of the road, he realised that there was enough space for the vehicle to pass.

He went to the front of the vehicle to assist and gave Lewis instructions as to how she could proceed.

However, Lewis was adamant that was not going to proceed, saying that the truck, which was travelling in the opposite direction, had come up alongside her, John said.

He said that the obstruction was cleared when the trucker complied with his instructions to reverse.

“She could have passed, but was playing hard ball and was very stubborn. In order to ease the congestion, I spoke to the driver and he was more cooperative,” John said during cross-examination.

He, however, said that the congestion came from Lewis’ “stubbornness and rude behaviour” and not the truck.

He said that during the time when he came upon Lewis’ vehicle and the truck, and when the road was cleared, vehicles had started to build up behind his vehicles.

The police chief said it took two or three minutes for the traffic to be cleared.

He said that at no time did he notice Lewis speaking to the driver of the truck.

Meanwhile, in his evidence, the investigating officer, Corporal 819 Keron Caesar said that on July 24, about 1:35 p.m., he was on duty at Central Police Station when he received a report on WhatsApp against Zuleika Lewis, of Cane End, driving PB167.

The report spoke of the offences of failing to remove a vehicle and obstruction.

“Based on the information received, I proceeded by summons and complained against the defendant to answer to the charges,” Caesar said.

He said he did not speak to Lewis regarding the report made against her.

Charles did not cross-examine Caesar, and that was the case against Lewis.

The lawyer made a no case submission, but it was not upheld.

Lewis then took to the stand in her defence.

She told the court that she has been driving for close to a decade and on July 24, she was driving the Belair road to Kingstown, which she travels everyday.

“The road is one of the worst in Carriere. The road is very uneven. There is a break on the right hand side into town. On the left is the normal tar, and on the other side a lot of gravel.”

Lewis told the court that she had to pick up an order in Sion Hill for 1 p.m. so she left home at noon.

“I was in no hurry,” she said, adding that she saw a truck speeding towards her.

“I stopped the vehicle,” Lewis said, adding that if she had not done so, the vehicle would have gone over the embankment.

She said that the truck driver, a man, proceeded with his vehicle until it got alongside hers.

“Of course, I told him he has to be careful because he doesn’t know the road and would have gone over the embankment. He started about women not being able to drive.”

Lewis told the court that her vehicle, a sports car, is pretty low.

“I just told him he could ease back so I can swing around. He continued with his slew of words.

“While we were having that discussion, I noticed a red jeep had approached from the back and I was telling him (the truck driver) I can pass as long as he eased back.

“Then a man approached the left hand of my vehicle. He stood over the vehicle and rested his hand on the top of the vehicle — because everybody is taller than my vehicle — and kind of leaned over and told me to move the vehicle.

“I told him it was impossible to move because the vehicle is low and the edge is very high. I explained to the truck driver to move.”

Lewis said that the “precedent” on the road is that the vehicle on the right hand side “goes into the dip and allows the next person to pass.

“That is how I concluded that he was unfamiliar with the Carriere road,” she said of the trucker.

She said that at that time she was unable to recognise the man who has approached from behind her, as he was standing over the vehicle and she assumed he was “a random man”.

“He spoke in dialect and said, if I ‘know who I be’. I couldn’t see so I bent forward and peered because the gentleman was standing and talking.

“He bent low, I saw his face and I chuckled and I said, ‘Yes I know who you are.’ He said, ‘Well, I am the Commissioner of Police and I am telling you to move your vehicle.’

“He asked me for my ID. Even though he did not identify himself, I obliged. He went back to his vehicle with my ID… When he went back to the vehicle, the traffic was cleared.”

Lewis said that because the police chief had her ID when the traffic was cleared, she had to wait until he returned to proceed.

People in SVG ‘will tell you I am nice’

During cross examination by prosecutor Sergeant 444 Jones, Lewis told the court that the commissioner of police did not give her directions as to how she might have been able to proceed.

She further said that she never told him that she was not moving the vehicle.

“I am putting it that you could have passed,” Jones said.

“I am telling you I told him it was impossible for me to pass,” Lewis said, adding that the height of her car as well as the drain at the side of the road resulted in that impossibility.

“Were you aware of how much space you had to the side of your car?” Jones asked.

“That’s why I stopped, because I could not proceed,” Lewis said.

“You heard the Commissioner of Police say he asked the truck driver to reverse, hence traffic began flowing,” Jones said.

“That did not happen. I guess it was a situation of him seeing a man approach my car and he felt threatened. But there was no conversation between the commissioner and the man.”

Lewis said that she was not scared of proceeding, as the prosecutor had suggested.

“I know the road and, like I said to the commissioner, had I gone that way, my vehicle would have been damaged.”

She said the truck driver had not annoyed her.

“If I didn’t care and if I was annoyed, I wouldn’t have stopped.”

“I am always nice. If you speak to 20,000 people in St. Vincent and the Grenadines, they will tell you I am nice.”

‘She was annoyed and became upset’

In his closing submission, the prosecutor told the court that the case had been made out against Lewis.

“She was annoyed and became upset because the truck came up on her and did not act as someone who knows the road and traverses the area every day,” Jones said.

The part that is really disturbing is that the commissioner of police or anyone seeing an obstruction would try to deal with it and give assistance to persons getting out or in.

“When the act speak about wilfully preventing or interrupting the passage of any person, the prosecution is staying that this section stands out here where the driver’s actions on that day was wilful and we are saying that acts like these should not be tolerated on the roads of St. Vincent and the Grenadines, especially where a police officer comes in and tries to address the situation.”

‘much ado about the purported rude manner’

However, Charles submitted that much ado has been made of wilful obstruction and failure to move but the prosecution had said precious little about the nature of the road.

The lawyer went through the law and the rules and their application to the case, adding that Lewis was “intimately familiar with the road”.

He said that the prosecution had made much ado about the purported rude manner in which Lewis had reacted to the police chief.

“… but it is very instructive to note that the COP said that the obstruction was cleared by the reversing of the truck and that the overall interaction only spent two or three minutes,” Charles said.

The lawyer disagreed with the characterisation of Lewis as an incompetent driver, which, he said, was suggested by the commissioner’s statement that any competent driver would have been able to proceed without incident.

“What is missing is the impossibility of her vehicle, a low vehicle, swinging in the direction to which the commissioner of police was trying to direct. Impossibility of an action does not equate an offence either under 26(6) or (11),” Charles said, referring to the legislation.

“The rules contemplate, and we suggest, that where issues or other things arise on the road that drivers make good sense of the matter. It is our evidence that Lewis, realising that the other driver must have been unfamiliar with the road, that he should have reversed. In our view the court should accept her version, as she is familiar with the road, being a native of that area,” Charles said.

“We say it was sufficient for her to stop for no more than it took to allow the newcomer to the village, the big truck driver to reverse, which he eventually did. So where is the obstruction? On both of these charges, we say that the evidence does not amount beyond reasonable doubt to being made out.”