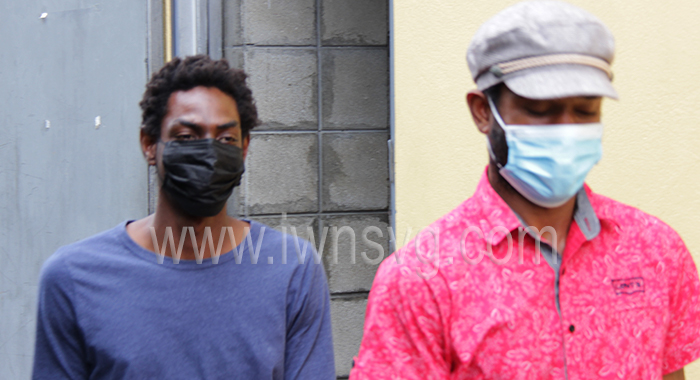 The defendant, Zico Graham, left and Christopher Johnson outside the court in Kingstown on Wednesday, April 27, 2022.

The Barbadians who the SVG Coast Guard met five miles off the coast of St. Vincent and towed to their base in Calliaqua have been found not guilty of entering St. Vincent and the Grenadines other than a port of entry.

Senior Magistrate Rickie Burnett handed down the verdict on Wednesday, two days after the men, Christopher Johnson and Zico Graham, were tried at the Kingstown Magistrate’s Court.

The magistrate agreed with the arguments of defence counsel Grant Connell that the law refers to physically entering SVG rather than merely entering its maritime space.

The men were tried on a charge that on April 19, at Chateaubelair, they entered SVG  other than at a port of entry.

They were initially charged also that on the same date, they knowingly and willfully allowed themselves to be landed as prohibited immigrants, but prosecutor acting Corporal of Police Corlene Samuel withdrew that charge ahead of the trial on Monday.

The men pleaded not guilty to the both charges when they were arraigned before the same court on Friday, and were afforded an expedited trial, which commenced at 8:30 a.m. on Monday — 30 minutes earlier than the court normally convenes.

The magistrate overruled the prosecution’s objections to the men’s bail and granted them cash bail of EC$1,500 each, which they secured.

At Monday’s trial, Petty Officer 640 Stephens of SVG Coast Guard, in his evidence in chief,  told the court that on “Wednesday, April 20”, at 4:30 p.m., having received information, he left the Coast Guard Base as coxswain on SVG02 with crewmembers AB Glasgow, AB Ferdinand, and AB Martin.

Stephens said he proceeded along the leeward coast and saw “Foreman”, a blue and white boat with one outboard engine about five miles off Larakai Point.

There was one person on the bow, who told him there was another person on board.

“The two occupants were brought on board the Coast Guard vessel and searched by AB Ferdinand.”

Johnson said they were low on fuel.

Nothing illegal was found and the men and they were taken to the Coast Guard Base.

AB Glasgow and AB Ferdinand accompanied Johnson on the Foreman, which followed SVG02 on its own power to the Coast Guard Base at Calliaqua.

At the Coast Guard base, officers from the Narcotics Unit searched the vessel in the presence of its captain.

Nothing illegal was found.

Stephens told the court that when the Coast Guard moved alongside Foreman, it changed course and tried to move away.

At this point, the prosecutor told the court that she was withdrawing the charge that the defendants allowed themselves to be landed as prohibited immigrants.

During cross-examination, Stephen said the main role of the Coast Guard is to save lives at sea.

He said the nationality of those lives did not matter, as “a life is a life.”

Stephen said he could not tell by looking whether Foreman’s engine was running when he first saw it.

He said there was nothing illegal about the men being five miles off Larakai, or being low on fuel.

“Did you offer to help?” Connell asked.

“There are certain things I am not permitted to say here,” Stephens responded. “We did not leave them there, so I should think I helped. I made sure that they got to shore safely.”

He said the defendants told him they were fishing and met bad sea conditions, but they did not say anything about engine trouble.

“While coming to the base, the boat that they had broke down twice. Tell the magistrate that,” Connell told stephens.

Stephens said: “Two times he stopped saying he had to bleed gas, one time it slowed down, and appeared to lose power. Sometime we get blockage, if you just rev out the engine [it clears].”

Next on the stand was Able Seaman 479 Everett Glasgow, who told the court that Foreman it began to move, as the Coast Guard vessel got closer.

He said the captain told him the only equipment that wasn’t working was one of the bilge pumps.

Glasgow said that they arrived at the Coast Guard base at 8:40 p.m., he having driven Foreman to the base.

He said that while proceeding to the base, he stopped to clean the glass. Also the engine shut off but “was easily restarted on the first attempt”.

He said the only problem he encountered with the boat was when the engine shut off once.

“From my brief observation, I did not see any fishing equipment,” Glasgow said.

During cross examination, Glasgow told the court that they did not offer the two Barbadian men fuel.

He said it was “not my call” to escort the men, rather than commandeer their vessel.

“Why didn’t you jump on the Bajans’ boat and take it away from them? You are a pirate?” Connell asked.

“No. I was taking it back to do further searches,” the officer said.

“The engine broke down, twice. Tell the truth,” the lawyer said.

“It shut off as I went on the vessel and it was restarted.”

“Did the engine shut off twice?” the lawyer said.

Glasgow told the court that when we boarded the vessel the engine was on. “As I was about to move off, it shut off.”

Leading Seaman Recardo Williams, a mechanic, told the court that on April 20, he was instructed to do a “sounding of fuel” on Foreman.

He said the vessel has two built-in fuel tanks.  The one at the stern was three-quarter full, containing 16 inches of fuel, while the one mid-ship was had in 5 inches —  a quarter tank.

“Both tanks combined would give you one full tank. They may have used up one tank from Barbados to St. Vincent,” Williams told the court.

“After looking at what was left of the gas, what can you tell us, if anything?” Samuel asked.

“There are two built-in tanks. They didn’t leave Barbados with one full tank.”

“See what I am telling you,” Connell said in objection. “Vincentian Coast Guard always guessing. This is an insult.”

Williams told the court that the fuel in the tank was enough to take the boat back to Barbados.

During cross examination, Connell asked Williams how he was able to calculate the volume of the fuel tank.

“Multiply and divide. The calculation, right, is not really relevant to this issue,” he responded.

“With respect, the lawyer is asking you a question,” Burnett said.

Williams said he was not able to say how he made the calculation.

He said it was not the advice of the Coast Guard that a person travelling between two points should have just enough gas to take them there.

“You never know if you would go further than your destination,” Williams said.

“Or you may experience problems at sea. It’s advisable to get extra gas?” the lawyer said.

He said he did not ask the accused men to be present when he checked their boat and this was not the normal Coast Guard procedure.

The court then heard the evidence of Immigration Officer Primus who recorded caution statements from both men.

In the statements, the men said they had planned to spend the night fishing around Barbados, but developed engine trouble.

They said they were able to restart the engine a number of times while drifting, and had made it close to St. Lucia, before having more problems.

They then drifted toward St. Vincent and decided to make it to land there.

During cross examination, Primus told the court that he had been an immigration officer for 15 years and has no issues with Barbadians.

That was the end of the prosecution’s case, and Connell made a no case submission, saying that it was the Coast Guard that brought the men to St. Vincent.

He further cited the law, saying the men were charged under section 10-1 of the Immigration Restriction Act

“There is actually no evidence as to what port they entered. Strange enough. Therefore, we have no case to answer, because there must be a law,” Connell argued.

However, Samuel summarised the evidence, adding that SVG has a maritime boundary.

“So they were met in St. Vincent, whether on the land or on the sea, … and persons entering the state should enter via a port and should inform the immigration authorities whenever they are in the state,” she argued.

Regarding the charge sheet, Samuel said:

The court ruled that the men had a case to answer and the lawyer said that his client would be offering no evidence in the matter.

‘a physical port of entry’

In his closing submission, Connell noted that the law says, “No person shall enter SVG except at a port of entry”.

He said this means a physical port of entry.

“The coast guard kidnapped these Bajans and brought them to the base. No disrespect to the Coast Guard but there is a way of doing things and that is not the way…

“You notice they didn’t check the engine, but they checked the gas?”

He asked the court to dismiss the charge, saying that the prosecution, on its own merit, had withdrawn one of the charges.