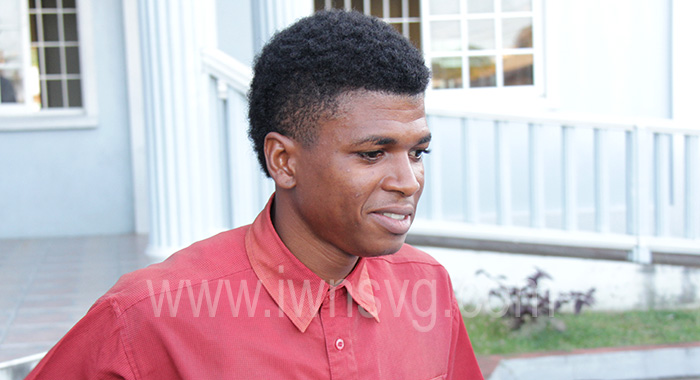 The accused, Zackrie Latham leaves the Calliaqua Magistrate’s Court on Tuesday, May 10, 2022.

The trial of the ex-police officer accused of stealing firearms and ammunition from the Georgetown Police Station last year continues at the Calliaqua Magistrate’s Court today (Wednesday) after a marathon sitting on Tuesday.

Magistrate Zoila Ellis-Browne resumed the trial around 10:12 a.m., having waited for some time for defence Counsel Grant Connell to arrive, from Kingstown, where he had earlier asked the Serious Offences Court to allow him to excuse him to the trail in Calliaqua, which had been adjourned from February.

As the magistrate told the prosecutor, Maria Jackson-Richards to call her first witness, the Crown Counsel noted that the accused has a lawyer who was not in court.

“Counsel are aware of the need to communicate respectfully with the court,” Ellis-Browne responded, adding that she had received no communication so the court would proceed.

Connell entered the courtroom as the first witness for the day, Sergeant 523 Collin Pitt was called and the trail continued until 5:34 p.m., with a 50-minute break, ending at 1:30, for lunch

The accused, Zackrie Latham, 25, of New Grounds, a former police constable, seemed to be in good spirits at the end of the day’s proceedings as he and his grandfather, who waited outside all day, left the court compound together.

During the day’s proceedings, the court also heard the evidence of Corporal 412 Ronald Noel.

Sergeants 445 Verrol Messiah — the senior sergeant the Georgetown Police Station and the leader of one of the two teams at the station at the time of the alleged crime — and 163 Disraeli Lett, the other team leader also testified.

Lett was reprimanded by the court for writing in his hand the serial number of one of the firearms in question and reading the information in court.

Towards the end of Lett’s testimony, the magistrate attempted to verify the number of charges against Latham.

She noted that the matters had gone to other courts before being transferred to her court and told the prosecutor that she had only two charges.

The prosecutor indicated that there should be 10 charges in addition to those for which the court had documentation.

The magistrate blamed the court’s  “internal procedure” for the situation.

Latham and his two co-accused Avi King and Meshach Dublin were initially arraigned at the Serious Offences Court.

King and Dublin pleaded guilty to the charges against them and are serving prison sentences.

Myron Samuel, a former national footballer, who pleaded guilty to possession of a firearm and ammunition allegedly stolen from the station, was jailed for 18 months but was released three months later on compassionate grounds.

However, Latham has maintained his innocence and the charges against him were transferred to the Georgetown Magistrate’s Court, and Magistrate Bertie Pompey later recused himself and sent them to the Calliaqua Magistrate for trial.

Police constable Juliet Jack, who was stationed at the Georgetown Police Station, as well as Station Sergeant Julian Cain, an armourer and weapons and firearms specialist attached to the Special Patrol Unit, also testified.

The day ended after the court heard the evidence of Corporal 743 Raycon John, a crime scene specialist, assigned to the Criminal Records Office, who processed the scene at the Georgetown Police Station after the alleged burglary and theft of the firearms.

John also recorded a video of the accused interacting with the investigator, head of the Major Crime Unit, Assistant Superintendent of Police Oswin Elgin Richards, outside the Calliaqua Police Station during the investigation.

The court is expected to hear Richards’ evidence today.

The trail is slated to resume at 9 a.m.