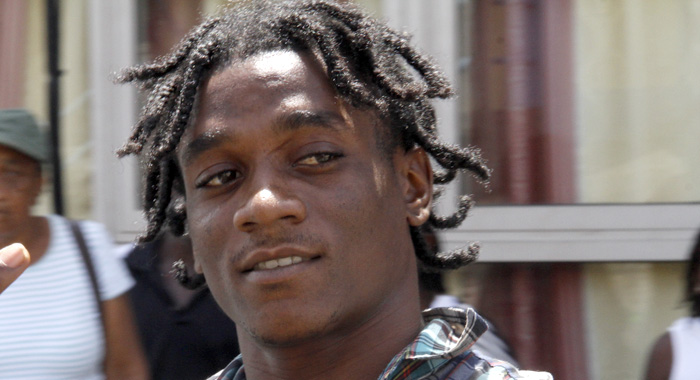 A man who during a break in his trial on gun, ammunition and drug charges expressed shock that a woman had posed on Facebook with an unlicensed firearm has been jailed for a loaded unlicensed gun that police found under a pillow on which he was sleeping.

Chief Magistrate Rechanne Browne sentenced Akeem Ferdinand, 26, of Rockies,  to 75 months in prison for the firearm after finding him guilty on May 12 after a trial at the Serious Offences Court

Ferdinand was further sentenced to 24 months in prison for possession of 19 rounds of 9mm ammunition without a licence.

However, he has to pay EC$1,500 for possession of cannabis in order to avoid a further three months in prison.

He was found guilty of charges that on Nov. 28, at Rockie, he had in his possession one 3.8 9mm pistol, serial number MG974524, without a licence issued under the firearm Act.

The court also handed down guilty verdicts on charges that on the same day, in Rockies, Ferdinand had 19 rounds of 9mm ammunition in his possession with a license, and had in his possession 552 grammes of cannabis with intent to supply it to another.

On Nov. 28, Corporal 296 Davis headed a party of Criminal Investigation Department officers to  execute a warrant at Ferdinand’s home in connection with a report of burglary.

On arrival, the officers met the door open and when they went into a bedroom they met Ferdinand and a 15-year-old girl naked on a bed.

They both appeared to be sleeping.

The officer roused the duo and found under Ferdinand’s pillow the black and silver firearm, which was loaded with 19 rounds of ammunition.

When cautioned, Ferdinand said, “Jah! Boy, I ain’t even remember that dey dey.”

He, however, declined to say anything during a formal interview with police and also opted not to answer any of the questions that the officer put to him.

In 2017, he was sentenced to  six years in prison for possession of an unlicensed firearm.

He appealed the sentence and the Court of Appeal reduced it to five years.

On May 9, during a break in his trial, Park Hill duo Jemelia Bailey, 32, a farmer, and Glendon De Freitas, 28, were each jailed for 38 months for possession of an unlicensed .380 firearm.

Police found the weapon after a photo appeared on Facebook of Bailey posing with it.

Ferdinand, who was in the public gallery when the duo’s matter was disposed of, expressed surprise that a photo of Bailey posing with the weapon had been published on Facebook.

The chief magistrate, on hearing Ferdinand’s comment, told him he was in no position to advise the duo.

The Mercy Committee released Bailey on May 17, one week into her 30-month sentence.

In August 2017, Ferdinand blamed alcohol after he was found with an Uzi pistol and 12 rounds of 9 mm ammunition without a licence.

“If I wasn’t drunk that night, I wouldn’t ah come across that gun,” Ferdinand told Magistrate Bertie Pompey when asked what he had to say for himself before sentencing.

“So the alcohol mek yo’ see the gun?” the magistrate responded during the proceedings at the Kingstown Magistrate’s Court.

“It make me pick it up and walk with it when I should ah leave it there,” Ferdinand responded.