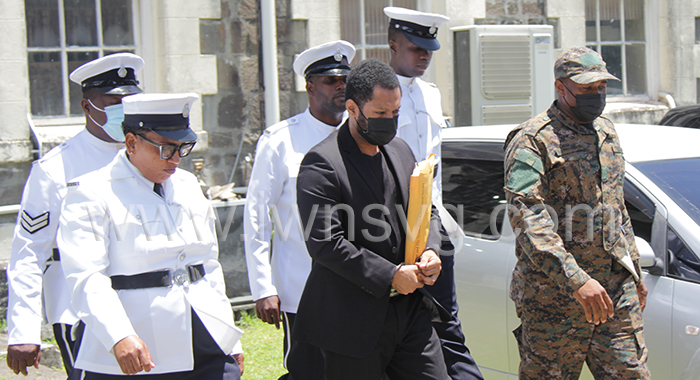 Police officers escort Veron Primus to prison on Thursday, June 23, 2022 during his trial.

The trial of murder accused Veron Primus continues tomorrow (Friday), when the prosecution is expected to call its seventh witness in the high profile case.

Primus, 35, is being tried for murder over the death of real estate agent Sharleen Greaves, whose body was found on Nov. 13, 2015 with multiple stab wounds at her office in Arnos Vale.

So far, the court has heard six witnesses, the evidence of two of whom were formally read into the record.

Two witnesses took to the stand in the courtroom, and two testified remotely, including a female witness, whose evidence the court heard in camera.

Hazel told the court that on April 19, 2016, he was payroll officer at GECCU in Kingstown. On that day, the then manager, Lennox Bowman, assigned him the duty of conducting a site visit on behalf of the credit union.

Hazel said that the site visit was at a compound in Arnos Vale where the credit union stored its vehicles.

“When I conducted the site visit, I represented my company, there were members of the Royal St. Vincent and the Grenadines Police and while we were there waiting for a third party, another group of police officers came, if my memory serves me right, with the person in question,” Hazel said, apparently referring to the defendant.

He said that the site visit was in relation to a vehicle owned by GECCU.

“I was supposed to be present to ensure that all goes well. We were going to be using the key, which I was given by my boss, the spare key, to open and secure the vehicle. That was basically my role there,” the witness told the court.

“It was a Suzuki jeep. I had the spare key in my possession and when asked to open the door and lock it back, I did it in the presence of all the officers. I think a judge was there,” Hazel said.

He told the court that he opened the door of the vehicle, started it, and then locked the door again.

Hazel said that apart from the key that he had, a police officer whose name he did not recall, also had a key.

During cross-examination, defence counsel Michael Wyllie asked Hazel whether he was correct when he said that his company owned the vehicle.

“It was registered to us. That is why it ended up in our possession,” he said.

He said he vaguely remembered the vehicle being “light coloured.  I can’t specifically say the colour of the vehicle now. It was not a dark vehicle at all. So, I think it was white.”

Asked whether he knew why the vehicle was there and why they were looking at it, Hazel told the court:

“The company is a financial institution and we give loans to individuals who are interested in owning their own vehicle. Until they have fully paid off for the vehicle, the vehicle belongs to us. So, with that being said, that was the premise of my statement. Because it was still being serviced to a loan so it belonged, legally, to my company, until it was paid off.”

He said that the bill of sale would remain in the company’s name until the loan is repaid.

“They (the borrower) could not sell it until they get a letter from us to take it to Income Tax in order for it to be released,” Hazel said.

He further told the court that the company had collected the vehicle from the police and secured it at its compound.

The witness said that before being sent on duty on April 19, 2016, he had “no prior understanding” of the reasons why the vehicle had been taken to the compound.

“I was asked to do a site visit and my boss gave me the keys so I was supposed to go to Arnos Vale with the keys and wait for further instructions. That’s it. That is what I did.”

He said that when the company lends money to someone to purchase a vehicle, it might retrain a key to the vehicle.

“If they are buying the vehicle outright, we don’t need to keep a copy of the keys. Different loan products have different stipulations. We had other vehicles on the compound but that is the only jeep we had there at the time,” Hazel said.

He told the court that the key was not on a keychain, but he could not recall whether it had a remote switch.

The witness, however, told the court that he used the key to open and start the vehicle.

“The remote switch did not ignite the vehicle,” he said.

Hazel told the court that he could not recall whether the key the officer used to open the vehicle was a single key or on a bunch.

He said he could not say whether there was a remote on the key that the officer had but that everyone present witnessed him putting the key into the ignition of the vehicle.

Hazel told the court that the Primus was present when he and the officer opened, started and locked the vehicle.

He further said that he had no prior knowledge of where his boss or the officer got their respective key.

He said he had “no information” on whether the vehicle was returned to the person who had been given a loan to purchase it.

Asked whether his company has seized or repossessed the vehicle, Hazel said:

“Because we are the ones who are responsible for it in the event that the owner is not around, so I guess that is how it fell on our backs. The vehicle belonged to us until the owner had paid off for it.”

Wyllie asked Hazel if it was that the owner had not repaid their loan.

The cross examination ended and there was no re-examination by the Crown.

Counsel Vynnette Frederick and Sunel Fraser have appeared along with Wyllie, the state-appointed lawyer for the accused.

Assistant Director of Public Prosecution Karim Nelson, along with Crown Counsel John Ballah and Kaylia Toney, appears for the Crown.

Primus made national headlines in 2016, when he was arrested and charged for Greaves’ murder as police investigated a report by Mewanah Hadaway, of Vermont,

that Primus held her against her will at a house in Vermont for four months ending April 2016.

Primus was charged with abduction and sex charges in connection with Hadaway’s allegations.

However, the charges were withdrawn in 2017 because the virtual complainant was not available to testify at the preliminary inquiry in 2017, having migrated.

Primus escaped from prison twice between 2016 and 2020 as he awaited his murder trial.

He is also wanted in New York in connection with the 2006 murder of 16-year-old Chanel Petro-Nixon.