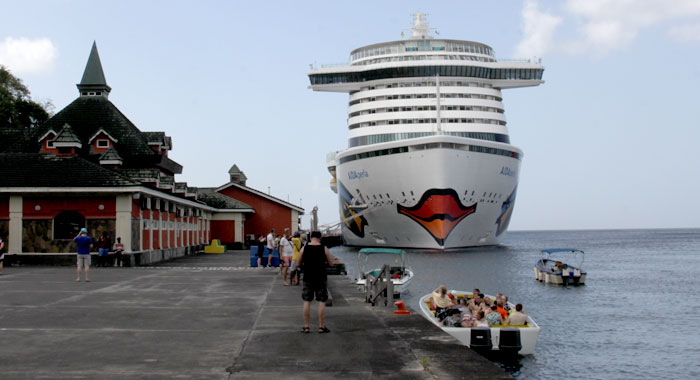 The government has said that when the US$250 million new cargo port is completed in Kingstown — in May 2025 – the cruise ship berthing facilities, located near the old port, will be expanded.

“We hear, however, no comment about what is required to turn a dilapidated regular port into a cruise terminal — whether we have to do extensive repairs and redesign, we are silent on that,” Cummings said as lawmakers debated a bill authorising the government to borrow US$62 million from Taiwan for financing the new port.

“We are simply told what will be the expanded cruise ship terminal,” the West Kingstown MP told Parliament, on Monday.

He said that as a project of that kind goes through its phases, such decisions require public discourse.

“Indeed, the public would ask if cruise ship tourism in Kingstown is of benefit to us or if a cruise ship development on the leeward coast, a better option for us, or, of course, in the beautiful Grenadines,” Cummings said.

“But we are told we are expanding the cruise ship terminal in Port Kingstown,” Cummings said, adding that he did not know what informed the decision.

“… but I know that on any given Sunday in the cruise ship season, you see cruise ships coming to St. Vincent and the Grenadines, landing at Port Kingstown and the tourists walking through what is virtually a ghost town.

“So, I really don’t understand the rationale for expanding cruise tourism in Kingstown, and I hope that as part of this project, down the road, we will get an explanation for it.”

Cummings said that “given all that has gone before, there is no choice but to support” the construction of the new port.

“And so, even at this 99th hour, as a Vincentian, as a Member of Parliament, especially for one of the Kingstown seats, my objective here is to raise some flags”.

K’town ‘bursting at its seams’— James

Speaking during the same debate, Minister of Tourism, Carlos James, said that Kingstown is “bursting at its seams, space is tight and the town can’t be expanded.

“But when we move the existing commercial port from its current location, we will have enough room…”

James said that when people see multiple cruise ships docked in other Caribbean countries they say, “But why are we not doing that in St. Vincent?”

“We don’t even have the infrastructure to support that,” James said.

He said that 23 years ago, when the New Democratic Party government built the US$17.5 million cruise ship terminal, “it seems sufficient for what is required of a major cruise terminal”.

James said that the cruise ship terminal can no longer meet the nation’s needs.

“So, when you ask the question about debt and the scope of the project, under the modern port project, we are not building a port that is going to need the of St. Vincent and the Grenadines in five years’ time,” he said, referring to the cargo port.

The tourism minister said that the country has to build a port that will span the lifetime of this generation “and one that when the economic planners in the next 40 or 50 years look back will say it was well conceptualised, conceived and built.

“Not one where we have to consider expanding or building out a new terminal, because, 23 years ago, we didn’t focus on having a large cruise terminal,” said James, who is MP for North Leeward, which the opposition says should be considered for a new cruise ship berth.

The tourism minister said that in other Caribbean islands, the cruise terminal are large enough, with space for duty free shop, cafeterias, and restaurants, parking and casino

“And you can’t do that with the port and the cruise ship terminal that we have. So, we have to move it, we have to create the space uptown, we have to expand it and build out a more modern Kingstown to meet the needs of the growing economy and the local business community that is existing in Kingstown,” James said.

“When you add that to what we are looking at doing in Arnos Vale, with the new city … we are going to see significant transformation in our developmental infrastructure.”