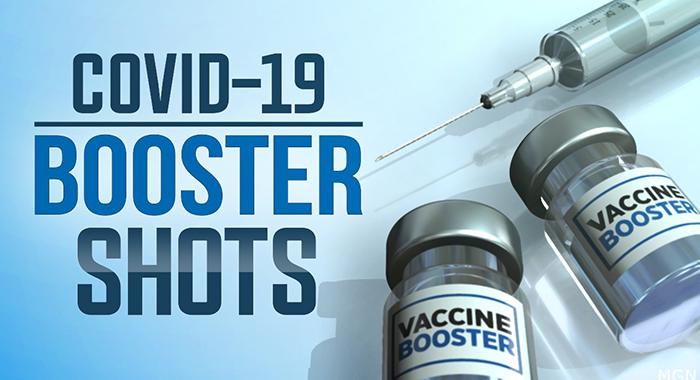 The Public Sector Union is calling on healthcare workers in St. Vincent and the Grenadines to rally together and resist the alleged government’s mandate that they take a COVID-19 booster shot every five months to remain in their jobs.

Elroy Boucher, the union’s president, said on Monday that it was depressing to even think about what happened, when the union attempted, last year, to get nurses to stand against the COVID-19 mandate, months before it came into force last December.

The union says that the Ministry of Health issued a memo on Aug. 5, mandating COVID-19 booster vaccine for healthcare workers every five months.

To work in the public healthcare sector, a person must have taken the required doses of a government-approved COVID-19 vaccine.

The memo said that booster shots are then required every five months.

“Here you have a direct assault on the employment of healthcare workers by Cabinet, by the ministers of government, they are the ones who sit in Cabinet…” Boucher said.

The memo said that the Cabinet decided on July 27 that booster shots would be mandated for healthcare workers.

“Now, tell me, are health care workers going to sit back and take this lying down or are they going to do like they did the last time when they were called out to shut down everything, they were persuaded by Cabinet members to go to work? The implications of this are stark,” said Boucher, who works in the maintenance department at Milton Cato Memorial Hospital.

Last September, on the first day of a four-day strike, 75% of nurses in St. Vincent and the Grenadines reported to their public sector jobs.

This was the case although Boucher said then that nurses had voted “overwhelmingly to take industrial action because they strongly oppose the vaccine mandate”.

On Monday, he said:

“This is at our door again and the situation has come right around. And now, healthcare workers are faced with an assault on their employment simply because we did not do what we needed to do two years ago. We did not stand our ground when we needed to stand our ground and this is the result of failure to stand for your right.”

Boucher said health care workers must ask whether they want to subject themselves to “continuous booster shots”.

He said that Prime Minister Ralph Gonsalves is “a prime example of booster shots because he had five jabs, based on what we were told”.

Gonsalves, who, in March, said he was looking forward to his fifth COVID-19 shot in about a year, tested positive for the viral respiratory illness in June.

“A number of those were booster shots and yet he contracted COVID, so what was the purpose for those booster shots,” Boucher said.

He said on Monday that some people might have decided to take a booster from time to time if there is a new variant of the novel coronavirus, which causes COVID-19.

Boucher said he knows there are people who were terrified about taking the vaccine and he had to talk to people “who were in a dire situation”.

He said he knows a lot of people who did not take the second dose of the COVID-19 vaccine because of the effect of the first dose.

“Now, they are talking about boosters twice a year,” he said, adding that in three years before the next general elections, health care workers will have to take six booster shots in order to remain on the job.

“If this is not cruelty, then what it is? The audacity to say it is necessary for you to be eligible for employment,” Boucher said.

The union leader noted that after Vincy Mas in July — the first since the pandemic –the prime minister said that the post festival COVID-19 numbers would guide its decision on whether to rehire unvaccinated teachers.

“Thousands of people revelled, no mask, no one was thinking about COVID. People were just having a good time, jamming up on one another, gyrating around the town and there was no spike to speak of,” Boucher said, adding that maybe the government wanted a spike in cases.

“So, there is nothing to talk about, nothing significant to direct you to make a decision like the one that was just read so you come up with something and you say, ‘Well, the parents and the teachers, those vaccinated tell me this and telling me that.’ A deliberate attempt to try and find something to justify the oppressive action that you intend to let loose on public servants.”

The prime minister announced on July 28 that his government was willing to rehire unvaccinated teachers and other categories of public sector workers who were dismissed for failing to take a COVID-19 vaccine.

He, however, said that based on the advice of Chief Medical Officer Dr. Simone Keizer-Beache and other health officials, COVID-19 vaccine and booster shots will remain mandatory for health care workers.

“Your employment depends on you taking a booster every five months. And I want that to sink in,” Boucher said.

“All of these workers directly impacted, directly, you are going to be assaulted, oppressed by this government.

He pointed out that on July 31, the ULP had its convention in Campden Park “and many of you jump and wave.

“One week after the convention, what comes out? An oppressive memo that is attempting to tell you your job is dependent on booster shots until when we don’t know. Until this government gets booted out of office.”

The union leader said he recently spoke to a teacher who said he took the vaccine because he has a mortgage.

For those who took the vaccine solely for their economic survival, the booster shots requirement is taking it to “the next level”.

The union leader said there have not been any major COVID-19 outbreaks among workers, adding that one could have understood the government responding so “drastically” during the early stages of the pandemic.

“But three years on, there is a greater level of understanding of what has transpired with the COVID-19 virus and countries have begun to relax their responses.

“What has happened that has given rise to this kind of draconian measure, especially after we have had carnival activities? I just can’t understand right-thinking people coming up with these decisions,” Boucher said.

“Why the need for this oppression?” he said, adding that he was stunned by the Cabinet decision.

Boucher said it is “mindboggling” hat a cabinet that include Education Minister, Curtis King, who has been an activist, and National Mobilisation Minister Orando Brewster, a preacher, would demand booster shots.

“You have the issue of the leadership crisis in the ULP, Camillo Gonsalves, Saboto Caesar and you mean to tell me they who have the ambition to lead the country will sit back and agree to this?

“And it is time that our people see what is happening. The writing is on the wall… what we are having here is naked oppression; it is draconian measures being imposed on workers in the country and in particular key members of the workforce. What has happened in the healthcare sector that has resulted in this type of decision?”