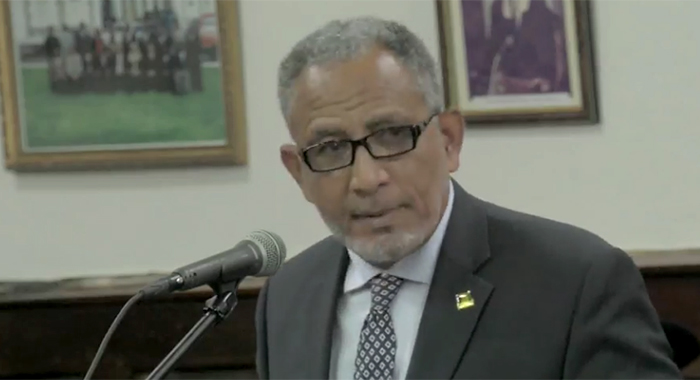 Vincentians will not allow in St. Vincent and the Grenadines “democracy” of the type practised within the ruling Unity Labour Party, says Opposition Leader, Godwin Friday.

He said that in his interactions across the country, people are concerned about the rising cost of living “and the fact that this government, this one-man show seems like they want to carry it on in perpetuity, and then pass it down, like a piece of furniture, from father to son”.

The opposition leader, speaking Monday on his party’s programme on NICE Radio, said that people are “outraged”.

He was speaking about the recent apparent attempts by the ULP at leadership transition before agreeing that Prime Minister Ralph Gonsalves, 76, should continue as the party’s political leader.

Friday said that in his New Democratic Party there is a process and the person who is political leader of the party is most likely to become prime minister.

“So there has to be a process by which such a person is selected, a democratic process. And I subject myself to that. And this is how it ought to be done,” said Friday, who, in 2017, became the third leader of the NDP, which was founded in 1975.

“And we are going to insist just upon that, and we are going to continue to call on people from all political stripes, people who may not have had any political inclination before, who are looking at the state of our country and saying, ‘No, I have to speak out because when good people stay silent and bad happens, they’re equally culpable. So, we have to all stand up.’”

The opposition leader said there is “absolutely no question” that there is a leadership crisis within the ULP.

Friday said that the ULP has “found that democracy only works well when the leader gets the way, the result that he wants.

“And then you go, now you have a situation where people they’re in their own party and making certain demands and want to be a part of it and suddenly they are locked out.

“And that is the same approach that they want to do for the country, the governance of this country. And we say no, that is not going to happen to St. Vincent and the Grenadines.”

He said the ULP can do what it wants inside the party and the members have to decide how much they are going to tolerate.

“And I am glad to see that many of them are saying, ‘No, enough is enough.’ They’re not taking that.”

Friday likened the July 31 ULP convention — at which the leadership transition issue was deferred — to inviting guests to a party but telling them they are coming only to eat and drink and not to take part in the making of important decisions.

“That is not how this country will be governed. And we are going to stand up for the democratic rights of our people,” Friday said, adding that a democratic approach will help SVG to move forward better than any other.

“They say, if you go alone, you may travel fast … because you could make your own decision itself, but if you go together, which is what democracy is, you’re making a collective decision, you will go farther, because you have more people who are working for a positive outcome.”

The opposition leader said he believes in this and that is why he is so committed to it in the NDP.

“… I believe it works best. We haven’t devised any system better yet. It has its faults and its frustrations but that is the process working itself out,” the opposition leader said.