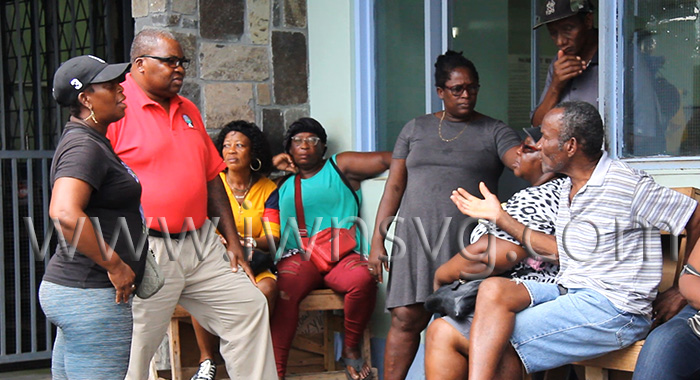 Manager of the Kingstown Fish Market, Ferique Shortte, second from left, in discussion with vendors on Thursday, Oct. 6, 2022 after they agreed revised increase fees for using the fish market.

Vendors at the Kingstown Fish Market and the Agricultural Input Warehouse (AIW) on Thursday agreed increased fees that would see the price of fish staying below EC$12 per pound.

AIW, the  state-owned company that manages the market, entered talks with the vendors after three full days of protests, during which the vendors did not sell any fish, and thereby did not use the fish market’s facilities and services.

They used placards to communicate their position, saying that the revised prices would have forced them to sell fish at EC$15 a pound, putting it outside the budget of poor people.

Lenon “Pemcy” Gabriel, president of the Fish Vendors Association, and Ferique Shortte, manager of the fish market, told iWitness News, on Thursday, that both sides have reached an agreement on new fees, which will increase but not at the levels previously announced.

“Today, we came to an agreement to settle the price of the fees so that we can continue and resume our business,” Gabriel told iWitness News.

“They increased the prices and the fees to 50% so they came to a conclusion and they reduced it back to 25% in order for us to sustain our business,” the vendor said.

He said that the increased fees are now at a level where vendors can sustain their businesses and keep fish at an affordable price.

“So, we are not gonna sell the fish at $15 a pound. Seeing that the management just reduced to 25%, … we are just gonna raise the price of the fish by just 25%,” Gabriel said.

“The most the fish will sell at is $12,” Gabriel said, adding that that would be the price if there is a scarcity of fish.

Gabriel said that all of the vendors will resume trade on Monday, but some of them might do so on Friday.

Meanwhile, Shortte told iWitness News that Thursday’s meeting of representatives of AIW and the vendors’ association was fruitful.

“… the decision that we came to is that the landing toll for some of the prices would be reduced. So, what we had increased at 15 cents, we will do at 12 cents and what was increased at 30 cents will be 25 cents.”

He said that the parties agreed that the price of ice would be standardised at EC$20 for storage of fish and use on the stalls.

Shortte said that when iWitness News arrived, he had been discussing with the vendors when they would resume trading.

“At the moment, many of them, they do not really have any fish and not so much because of the strike but it is really a slow season for fish,” he said.

He said that fish landings have been down over the last couple of weeks, adding that fish vending is likely to resume on Monday.

On Wednesday, the vendors challenged Prime Minister Ralph Gonsalves’ statement to the media one day earlier that the fish market was losing EC$30,000 per month, and lost EC$300,000 last year.

“The expenses as stated by the prime minister, yes, it’s true,” Shortte said, adding that vendors did not factor in maintenance cost in their calculations.

“That is a significant load to maintain the equipment in the back there,” he said, adding that people on social media asked why the market did not install solar panels to assist with electricity cost.

“We have discussed changing out the equipment and that was during COVID time we were planning to but the issue with COVID and the war in Ukraine, the transportation cost has doubled.”

Shortte told iWitness News that because the equipment came from Japan, the spare parts have to be sourced there.

“So, because the transportation cost has more than doubled, what we have to do now is continue using what we have there and get spare parts to substitute.

“Some of the spare parts, the company, because they have moved on from that technology, the company actually has to go now and build them for us.”

The executive declined to say how much the fish market pays for electricity and water.

“I can tell you a lot. … within the last couple of months, the electricity bill increased by 50%.”

He urged that vendors conserve water, adding that people have complained about seeing vendors or their assistants leaving the tap to run while processing fish.

“There is a cost to all of this,” Shortte said, adding that he has explained to vendors that they would pay more for water if each tap was fitted with a meter.

Shortte said only potable water is used at the fish market.

He said that potable water is used even in cleaning the floors and yard of the fish market.

The executive told iWitness News that the fire hydrant near the market, which is used for deep cleaning of the facility, dispenses potable water and is linked to the market’s meter.