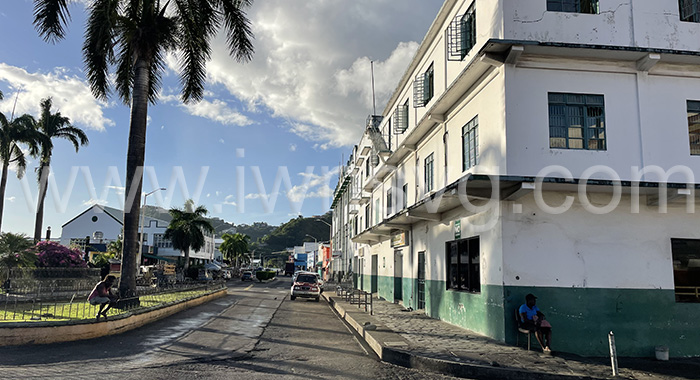 The area outside P.H. Veira & Co. Ltd., building on Bay Street, Kingstown, on Sunday, Nov. 13, 2022, after the vendors furniture were removed.

The section of road outside the P.H. Veira & Co. Ltd building on Bay Street, Kingstown was cleared of vendors’ furniture on the weekend as Kingstown Board continues with the clean-up of the city.

On Saturday, the Kingstown Board gave vendors on that stretch of road letters informing them that “P.H. Veira and co. Ltd.’s new management will begin its public operations today, Monday, Nov. 14.

On Saturday, vendors outside P.H. Veira & Co. Ltd, expressed displeasure with the short notice given to them that they cannot vend in the area on Monday.

“Right now, me ah chip off (going mad). O Gaard, me a chip off,” one vendor told iWitness News, speaking in the Vincentian vernacular during a Facebook Live broadcast.

“Just give us a chance please until December and we will done with that for January. We will go and pick fares all about (prostitute ourselves) and satisfy we needs,” said the woman, who later told iWitness News off camera that vendors sometimes generate six months’ income during the Christmas season.

P.H. Veira & Co. Ltd, which has been in operation for 80 years, will cease business today, and a new entity will begin operating in the building, which houses a light hardware, wholesale, supermarket and bakery.

A representative of the new company told iWitness News, on Saturday, that operations at the building will continue seamlessly, despite the change in ownership of the businesses.

For years, the owners of the company had failed to secure the cooperation of the Kingstown Board in relocating vendors, who they say were clogging the entrance to the supermarket.

However, on Saturday, the Kingstown Board issued the notices telling the vendors that they cannot conduct business in the area today.

The notice did not say whether the vendors could return to the area on Tuesday.

However, on Nov. 10, Warden of Kingstown Board, Clayton Burgin, issued a public service announcement, saying that the two new vegetable markets – uptown, opposite C.K. Greaves & CO. Ltd, and downtown across from the Cenotaph – will be officially open on Thursday, Nov. 17.

After the 9 a.m. opening ceremony, the buildings will be occupied by street vendors who have registered with Kingstown Board, Burgin said.

“Vending will be prohibited for those who have been ordered to leave the street by Monday, Niv. 21, 2022.”

On Sunday, workers were power washing the new market located across the street from the Cenotaph.

The vendors who spoke to iWitness News on Saturday, noted that in the letter from Kingstown Board nothing was said regarding where they can operate today.

“Nothing arwe ah go in dey go buy! Aryo too wicked,” one vendor who was selling fish on the sidewalk outside P.H. Veira Supermarket told iWitness NEWs.

One vendor, who later said she is a former calypsonian who went by the name Singing Beverly, called on vendors stand up for their rights, saying vending is their livelihood.

“Aryo just come and move people like dem ah cattle or animal,” said Beverly, who was selling fish from an icebox outside the supermarket.

“They send the letter now for now… Why you don’t give them a week’s notice so they will know where they are going? …  That is not right. People are not animals. This is what they are making a living from.”

Beverly said that the people in the area are going to stand up for their rights.

“That is the question I want to know. Where we are going on Monday?” she said, noting that the Kingstown Board’s letter was silent on this.

Another vendor told iWitness News that if Kingstown Board does not want vendors to use wooden structures, vendors will use plastic.

The government and other entities and individuals have complained that the wooden furniture used for vending in Kingstown is unsightly.

One man showed iWitness News a number of pieces of paper that he had in a backpack, saying that they were receipts for the daily sums he had paid to Kingstown Board to permit him to vend on the sidewalk.

“We’re paying and we still have to move. Well, if we have to move, pay us back the money we have been paying. You want us to pay today and run us on Monday. How does that sound? How do you want us to live?” the man told iWitness News.

Vendors pay Kingstown Board at least EC$5 a day to sell on the sidewalks.

The 39-year-old man said he has been vending in the area since he was “a little youth man.

“Everybody been poor before they reach par they reach today,” he said.

Another vendor told iWitness News that she has two special needs children.

“I am a single parent. I have two special needs children to mind. One with active seizure. I have to buy his medications almost every week,” the mother told iWitness News.

Meanwhile, Joan Frank, told iWitness News that she has been vending for over 32 years, 20 of which has been outside P.H. Veira & CO. Ltd.

“They told us the road belongs to Town Board and up there (the sidewalk) belongs to Veira… Last time when Veira was running us, Town Board come in and  said we can vend on the road but not on the sidewalk and this trip now, they don’t even tell us what and what,” Frank told iWitness News.

“All they do was bring a letter this morning and I pay this morning. Look my paper (receipt) here.” Meanwhile, another woman who said she has been vending all her life, said that the people who are vending outside the supermarket, shop inside.

“If they come and say keep off the building a little bit, give them a little room, we go understand, but what about they tell us the 14th no vending, what they want us to do? They have space for everybody in the market?” the woman told iWitness News.

She said that Kingstown Board did not meet with vendors.

“They just come this morning and stop the letter in our hands like when dog poop on the ground. They don’t have us to study…

“I travel. Vending is all over the world. All they have to do if have a meeting with the vendors and say decency and order. Put us properly,” the vendor said.

“We are human beings, we have responsibility,” she said, adding that vendors have to pay for electricity, water, internet, food and other bills.

Government could find work for everybody? Could we depend on the government to feed everybody hand out? We want to be independent, not dependent. So, I want the town board to come out and have a meeting with the vendors.”

Another woman told iWitness News she has been vending for 40 years and had been vending in the area for a long time.

She said Kingstown Board never asked them to move and continued to pick up monies everyday “which means they not with PH Veira no more. Because if they with PH Veira, they ain’t go come and pick up money.”

The woman noted that the Kingstown Board had spoken about the new market, but pointed out that no stalls had been assigned to vendors.

“Some will be selling and some can’t sell. That is not right. We have our needs to meet,” she said.

“That is not right at this time of Christmas,” she said, adding that vendors are merely trying to make a living.

“This is more killing and crime in the country. They are not putting the country safe,” the woman said, adding that vending sent her children to school and provides her livelihood.

One man who stopped to listen to what the vendors had to say, told iWitness News:

“They should not move until government find somewhere to put them. That is my view. They just can’t move today for tomorrow because they don’t know where they are going.”

This is the second time in less than a month that tensions between vendors and Kingstown Board are flaring up.

On Oct. 24, vendors complained when the town board destroyed furniture that they use when conducting business inside the Kingstown Central Market. Vendors also complained that some of their items, including their wares, were placed in the garbage bay at the market.

6 replies on “Vendors removed from in front Veira building ”