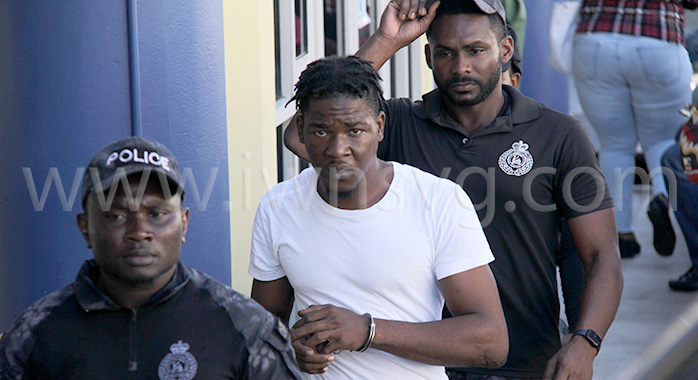 The accused, Bally Alexander, outside the Serious Offences Court on Jan. 2, 2023.

A Lowmans Leeward man who is on bail pending the outcome of his High Court matter has been remanded in custody after being charged for firearm and ammunition possession.

Bally Alexander was brought before the Serious offences Court on Tuesday, charged that on Jan. 2, 2023, in Lowmans Leeward, he had in his possession one Ruger P95 .9mm pistol, serial number 317-73706, without a licence issued under the Firearms Act.

He was further charged that on the same date and place, he had in his possession six rounds of 9mm ammunition without a licence issued under the Firearms Act.

Alexander pleaded not guilty to both charges.

Prosecutor Sergeant Cornelius Tittle objected to bail, telling the court that Alexander is on bail in relation to a matter before the High Court.

He said that as a condition of the bail, Alexander is required to maintain the peace and may offend if further released on bail.

“This may not be a ground but the state of affair in the country is alarming,” Tittle told the court.

“2022 was the bloodiest year yet, and most of the murders were firearm-related,” the prosecutor said, adding that he was objecting to bail on that basis.

He asked for a short adjournment before the matter is brought to trial.

She invited Alexander to respond to Tittle’s application and the defendant asked the court to explain what Tittle had said.

After hearing the explanation, Alexander had no comments.

In denying Alexander bail, the chief magistrate said that the prosecution had identified strong grounds for his objection.

She said that by denying Alexander bail, the court might be saving his life, adding that he was recently in court on a firearm charge and had spoken about being shot at or people looking for him.

“You have a charge before the High Court, you have been caught up with firearms before and you are before the court with a firearm offence. The question is, should bail be granted?” Browne said.

She said that bail would be denied, predominantly because Alexander has a matter of a similar nature before the High Court and for which he has bail conditions.

“And you are before the court in such a short space of time. I am not going to consider bail.”

“I don’t know what is so funny for you to be snickering… Firearm and ammunition offences are not funny. You have been a victim before. Settle down over there, please,” she told the defendant, referring to his behaviour in the dock.

Alexander was remanded in custody until Jan. 13, the date of his trial.

One reply on “Man on bail charged for firearm, ammo”