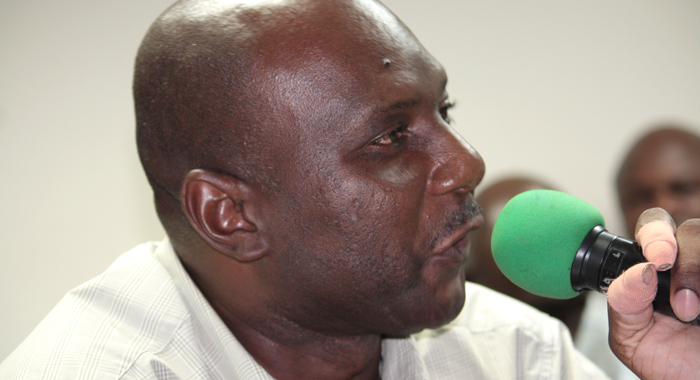 Freelance journalist Ashford Peters on Friday, in a post on Facebook, detailed his observation at the Ministry of Agriculture press conference on Wednesday.

Searchlight, in a post on its Facebook page on Friday, said Jarvis said that his comments were not in reference to Chance and that he was ‘‘speaking in defence of press freedom’’.

On Wednesday July 23rd, 2014, at about 8.30 a.m. I was walking from the direction to the steps at the back of the Ministry of Agriculture building and heading along the main corridor toward the conference room when I saw Audwin Andrews and [Zulieka] Lewis approaching from the corridor to my left. They were speaking with each other. We exchanged greetings and I stopped to allow them both to enter the conference room ahead of me. As we entered the room I observed there was no one else there. I heard both of them saying that the press conference, scheduled to begin at 8.30 a.m., was for the print media only. I asked why and Miss Lewis told me that another press conference would be held subsequently for the electronic media. I asked if she meant later that morning and she said no, at a later date. Miss Lewis also informed me that no video recording was allowed. Mr Andrews also made comments confirming what Miss Lewis said and he left the room. I continued conversation with Miss Lewis, indicating that it was a strange move by the ministry as I wondered as to the reason. Miss Lewis proceeded to make some adjustments to the room, putting chairs in an orderly manner. I asked her when the press conference was likely to start, noting that there was no other person present from the other media houses. I expressed concern that it was Wednesday, which meant it was production day for the Friday papers. She then told me she would attempt to get the minister, Saboto Caesar, to get the press conference started. She left the room and I left, too, because I did not wish to be alone in a government office or conference room with the door closed.

As I was standing in the main corridor, waiting for anyone to come by, I saw Junior Jarvis approaching along the corridor from the opposite end, coming from the direction of the front of the building. We exchanged greetings and I walked back into the conference room, Jarvis following. I then informed him of what I was told — that it was a press conference for print media only — and we expressed concern about the time. We both agreed that in that case the ministry could have sent a press release. We could not understand a minister seeking to have a press conference with the print media only as we could not recall ever attending such occasion.

About two minutes later, as I was sitting in a position facing the door and Jarvis was sitting slightly to my right on the left side of the door, Kenton Chance walked in. He said “good morning.” I said good morning to him. I saw no acknowledgement from Jarvis nor did I hear any reply from him.

Chance enquired about the absence of other media houses and the start of the press conference and I told him what Miss Lewis had told me. He, too, was amazed and said how strange such move was. Jarvis was still sitting when Chance made the comment. We spoke briefly, during which time he told me he would have to leave possibly before the end of the press conference because he had another engagement for that morning. Shortly after, Miss Lewis walked in and both she and Chance exchanged greetings. Miss Lewis confirmed what I told Chance and while we were talking Andrews returned. Chance joked that he noticed that his status was being lifted as persons were beginning to refer to him as Mr Chance and that he had begun receiving invitations from the Ministry of Agriculture, unlike before. He expressed gratitude for the invitation.

We were then informed that the press briefing was about to begin shortly and that they waiting on two persons.

Some minutes later, Minister of Agriculture Saboto Caesar walked into the conference room and greeted us, we all responded and started putting our recording devices in place. He beckoned the journalists to come “closer let’s have a conversation.” Chance and I looked at each other and commented. Chance said he thought it was a press conference. Chance also expressed concern that the event was being held for print media only. The minister indicated he wanted to have a forum with an informal setting. Chance and I both replied that we were journalists and that it was the media he was dealing with.

As Chance was placing his recorder, affixed to a small tripod, on the table, minister Caesar informed him that videotaping was not allowed. Chance questioned him about the matter, which he had heard minutes before, and he told Chance that he could give him an interview after, during which he could videotape. Chance complied with the minister’s request not to videotape. He asked if audio recording was allowed and the minister said yes.

Chance informed minister Caesar that he was also representing the Caribbean Media Corporation (CMC) and he was certain the position would be of interest to the regional news agency. He also informed the minister that the CMC was very much interested in the development in the cocoa industry and so would wish to be part of the press conference.

After the minister’s presentation to the three journalists present, he invited questions.

Chance was first to pose his questions to the minister. Before asking his questions, he stated “I have some questions. I will like to ask you to permit me to leave after. I have another engagement.” He also identified himself saying “Kenton Chance, I-Witness-News/CMC.” The minister replied, “Yes.”

After he asked several questions on the issue of the cocoa industry and the company’s pull out from this country, Chance stated, “Well, I came to this press conference with the intention of recording it. I work also for a regional organization which is very interested in this story. Can you tell me on the record why you did not want this press conference videotaped?”

In his reply, minister Caesar stated, “No, I just wanted to have a very, an open conversation with you… I wanted you to be able to be free to ask certain things. And I wanted to, not the formality. But I have never been fearful of formal press conferences. And I am open to do one at the end of the six weeks when I have a better grasp of how it would have evolved in six weeks.”

Chance asked if any of the television stations in St Vincent and the Grenadines were invited to the press conference.

The minister replied, “I am not aware that any were invited.”

Chance then left and I began to ask my questions. Following my several questions, Jarvis addressed the minister of Agriculture.

“First of all, I got the impression that this was supposed to be a meeting for the print media. While I don’t have a problem with other media houses being here, but I think it gave an unfair advantage to somebody who operates a blog. Because, I don’t think they will respect … what I believe is the concept you wanted the print media to have; for the same reason the television were not allowed to film. So, I would like to put on record my disappointment that that was allowed,” Jarvis told Minister of Agriculture Saboto Caesar.

Minister Caesar, at the end of the press conference stated, “As I close, because I have to go to Cabinet now, I would just like to put on record, just like when I started, that it was really for the print media.”

Responding, Jarvis stated, “And I think it should have stayed that way regardless to who the person is.”

“Yes, but we allowed it to go that way,” the minister replied.

JUST A FEW SIMPLE QUESTIONS I HAVE

Now, it is a well-established fact that news content submitted to CMC are published in the print media, as well as the electronic media around the Caribbean and also carried by some associated international media houses. So, the question becomes, was Chance, as a known representative of CMC, improperly attending the press conference as a journalist who writes, indirectly, for newspapers across the region, or, put another way, whose works are published by regional newspapers through CMC? Was he given an unfair advantage, having been given an opportunity to write news stories which would be published in the print media across the region? This talk of fighting for press freedom, who was doing the fight[ing]? And, if any freedom was denied, who denied it, Kenton Chance, the Minister of Agriculture, or who?

Are we saying a person can’t be wearing two caps at the same time?

And, if in the event one cap is acceptable but the other is not, then that automatically disqualifies him, or should exclude him, from performing his duties and functions under that cap which is acceptable? Wow!

I THINK THE REAL CONCERN SHOULD BE FOCUSED ON WHY IT WAS SO CRITICAL TO EXCLUDE THE [ELECTRONIC] MEDIA. ISN’T IT PUBLIC INFORMATION WE ARE DEALING WITH?