PM gives seven reasons why ULP should be re-elected 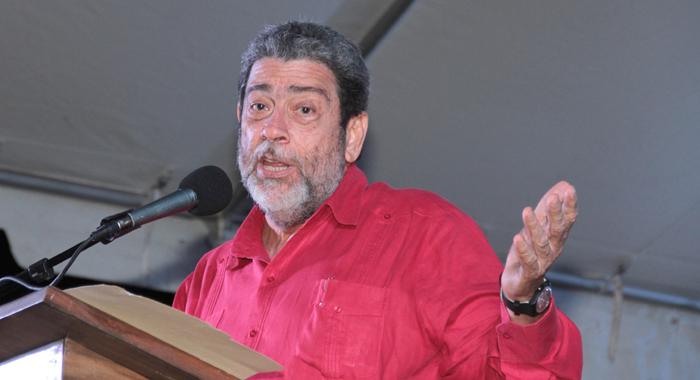 The ruling Unity Labour Party (ULP) has listed seven reasons why Vincentians should re-elect it for an unprecedented fourth consecutive term in office for a Labour government.

Prime Minister and head of the ULP, Ralph Gonsalves, has said that he will allow Vincentian to elect a new government this year, ahead of the March 2016 constitutional deadline.

He told a ULP campaign rally in Redemption Sharpes on Sunday that there are seven reasons why the ULP, which came to office in March 2001, should continue to govern St. Vincent and the Grenadines.

“First of all, our vision our philosophy, our policies, our programme in economics in education, in health, in social infrastructure, in foreign policy, in everything,” Gonsalves told media audiences and the supporters who remained amidst heavy rain at towards end of his 93-minute speech.

“We have a compelling narrative and a set of plans,” he said.

He told listeners that the main opposition New Democratic Party (NDP) failed on that point when party president and Leader of the Opposition, Arnhim Eustace, in response to a question in New York earlier this year about NDP plans for the development of the country over the next 15 years, said, “Ask Ralph”.

Gonsalves said the ULP’s plan is contained in the SVG National Economic and Social Development Plan: 2015 to 2025 — a 150-page document his government published two years ago.

Gonsalves said the second reason is his government’s achievement, which he described as “extraordinary”.

He mentioned the current work that the party is doing as the third reason, and its plans for the future as the fourth.

Gonsalves listed as the fifth reason the ULP’s candidates, which he said are of quality.

Leadership was his sixth reason.

On the topic of leadership, Gonsalves said he is the only politician in SVG who has contested every election since Independence in 1979, adding that Oct. 16 will mark his 47th year as a political activist.

“And I have been reading a lot of theology to overs (understand), more and more, the words of Almighty God.

“I am not claiming that because I have been trained in any specific area that you must elect me as prime minister again. I am saying that I have a trained mind in which I marry faith and reason and I analyse things in a scientific manner, taking account of all the facts and circumstances and take advice where necessary and advice from experts and apply my heart to reason and come to conclusions, linking reason and faith.”

Gonsalves said love was the seventh reason why his government should be re-elected.

“I am giving you the seven reasons. You can turn left, right, upside, down. Those are the reasons. They are cogent, and that is why I come to you and tell you to give us another five years.”

Gonsalves noted that in the 2010 election, the electorate gave him eight of the 15 parliamentary seats and said the main opposition New Democratic Party (NDP) — which holds the remaining seven seats — cannot wrestle any of those eight from the ULP.

“They lock up like the rock of Gibraltar. So the question is not whether we going be in government. But hear me now, over the last five years, because there were just eight, yo’ put extra strain on me. … I want for the next five years for you to give me more soldiers, comrades at arms, to carry the weight and to prepare the transition,” said Gonsalves, who has said he will hand over leadership of the party at the end of the next electoral cycle.