‘You know that I am a significant person,’ Beresford tells Sharpes 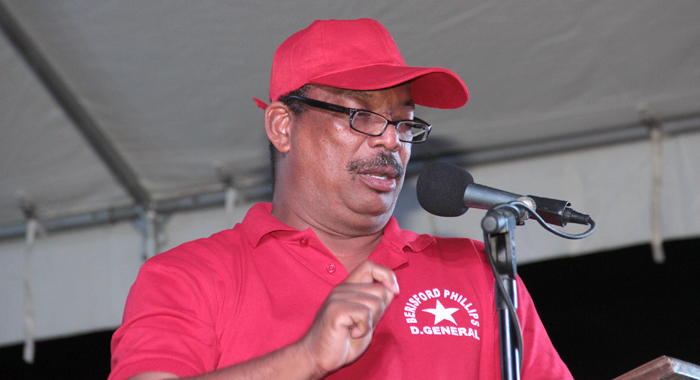 Beresford Phillips, the ruling Unity Labour Party’s (ULP) candidate for Central Kingstown, on Sunday told party supporters how he struggled after the death of his parents and grandmother in 1984, but worked his way from a farmer to an insurance executive.

“There are those who in the NDP who would attack me. There are those who would say I am insignificant. That is their business. You know that I am a significant person, because over the years I have worked with you,” Phillips, a businessman and first-time candidate, told the ULP rally in Redemption Sharpes, his home village.

He highlighted three programmes of the ULP, which he said are bringing much benefit to the people of St. Vincent and the Grenadines.

Phillips mentioned the education revolution, said it has benefitted children all over SVG, via universal access to primary and secondary education and more opportunities and scholarships for tertiary studies.

He praised ULP leader, Prime Minister Ralph Gonsalves for these initiatives, saying that with Gonsalves as leader, Opposition Leader Arnhim Eustace and the main opposition New Democratic party (NDP) that he heads, will never seize the reigns of power.

Phillips, a former, long-standing head of the state-owned Housing and Land Development Corporation (HLDC) said the government’s housing programme, under which no-, low-, and middle-income houses were built for citizens, was his “baby”.

He said he was happy to have served as chair of the HLDC for years, during which he was able to help many Vincentians, particularly people in Central Kingstown.

“Frankly, I cannot be the chairman of a state entity that offers tremendous benefit to its people and I, being a central Kingstown man, … leave you out. Never! And I have used that opportunity to help many persons with their housing needs,” he said.

Phillips told the gathering, which braved heavy rain to attend the rally, that it was he who suggested that a housing project be built in Green Hill, where 94 houses were constructed.

Phillips was lauding a flagship programme of the ULP, which has come under heavy criticism since September 2014, when one of the houses built in Clare Valley under the programme collapsed.

After the collapse of the house, it became public that many of the other houses the HLDC built in Clare Valley — all of which were constructed when Phillips was chair of the HLDC — were poorly constructed, with some owners saying their houses were shaking.

A house in the area has been identified for demolition.

The fiasco resulted in government having to invest EC$3.3 million of public funds to shore up the approximately EC$10 million in private investment by citizens.

Similarly, some persons have been waiting or almost a year for houses in Green Hill that are being built under the same programme.

While they wait for the delivery of their houses, some clients of the HLDC have had to pay rent while paying a mortgage for a house they are yet to receive.

Phillips was replaced as head of the HLDC earlier this year, with the government saying the decision was taken because he had been identified as an election campaign and this has been its practice over the years.

At Sunday’s rally, Philips also praised the ULP for its social development programmes, noting that under the ULP government, Public Assistance (social welfare) benefits increased from EC$50 to EC$225 a month per recipient.

Gonsalves said during Phillips’ speech that it will be further increased to EC$250 in January.

“What more can we ask for of a government?” Philips said.

He also spoke highly of the government’s “Lives to Live” programme, under which bathrooms and toilets are constructed on the homes of needy, old and disabled persons “who can’t help themselves”.

He said six residents of Central Kingstown have received assistance under the programme, but added that he has identified 16 other persons, whom, she said, qualify for assistance.

“So that list must be increased,” Phillips said, adding that he is afraid that the Prime Minister might call the elections “and the numbers wouldn’t he significant”.
General elections are constitutionally due by March 2016, but Gonsalves has said Vincentians will elect a new government before year-end.

Phillips, who began calling himself “D General” after he was selected as the candidate, will try to unseat Major St. Clair Leacock of the main opposition NDP, who is seeking a second term in office.

One reply on “‘You know that I am a significant person,’ Beresford tells Sharpes”