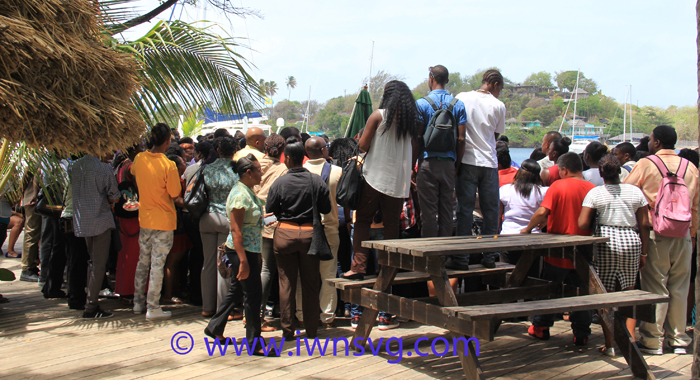 Jobseekers await interviews at the open call for vacancies for KFC on June 23, 2015. PM Gonsalves Tuesday that the focus in 2016 must be on job creation. (IWN photo)

St. Vincent and the Grenadines must direct its attention to economic growth and job creation in 2016, Prime Minister Ralph Gonsalves says.

He told a national address on Tuesday that the government will present the Estimates of Revenue and Expenditure for the year 2016 before the end of January.

The annual Budget will be passed sometime after. “The Estimates and the Appropriation Bill will be grounded in prudence and enterprise,” said Gonsalves, repeating a recurring Budget theme over the last few years.

“ It is necessary and desirable that we be prudent in our spending, manage efficaciously our fiscal deficit and public debt, secure further financial stability, ensure economic growth through public and private enterprise, enhance wealth and prosperity, create more jobs, reduce poverty and hunger, strengthen the social safety net for the vulnerable, stimulate sustainable development overall, and further improve public administration and good governance.

“Centrally, therefore, in 2016, we must direct our efforts primarily to growing the economy and ensuring the creation of more jobs for the people,” he said.

Parliament in January 2015 passed a Budget of EC$969 million budget for 2015. The fiscal package included additional tariffs on curry powder, candles of paraffin wax (a petroleum by-product), beers, malts, aerated water and a host of other items, including prepared animal feed.

Further consumer of tobacco products were expected to contribute an additional EC$500,000 to the national coffers through an EC$1 increase in excise on cigarettes.

The government also increased from EC$0.55 to EC$1.55 per 100 sticks the excise tax on cigarettes and a 1 per cent increase in the Customs Service Charge, which saw the levy move to 5 per cent, as the government attempted to reduce “substantial arrears” with regional and international organisations.

Some workers ‘deliberately unproductive and lazy’

In his address on Tuesday, Gonsalves addressed the work ethic of citizens.

He encouraged workers, supervisors, and managers in the public sector and in private businesses to work together for the good of the enterprises and themselves.

“Too often, some workers treat their employers as persons against whom hostilities, and anti-business activities, inclusive of sabotage, are to be waged; some workers, albeit a minority, are deliberately unproductive and lazy. Too often also, some managers or owners of enterprises treat workers disrespectfully and with disdain.”

He said enterprises and the nation cannot be properly developed with “these terrible managerial or worker attitudes at our places of work.

“This is something which radio and television should promote. Customers and persons whom we serve in the public and private sectors pay the bills; employees and employers must never forget this and improve the quality of our service delivery.

“Rudeness, laziness, and ‘don’t care’ attitudes must be avoided. Let us try to do much better in these respects, and others, in 2016. It does not take much effort for us to improve. Our workplaces should not be ‘war zones’. We must make every effort to make our workplaces enjoyable, safe, and very productive!” Gonsalves said.