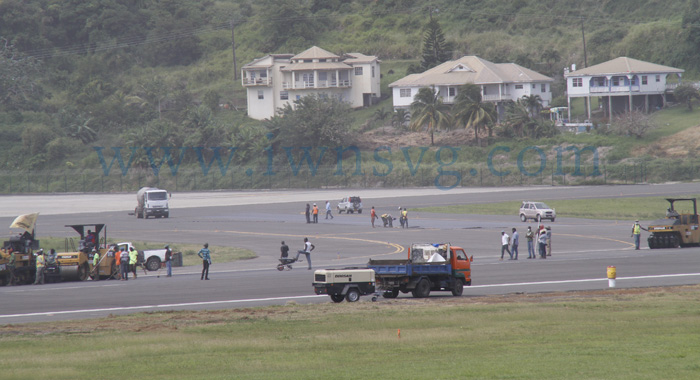 Scores of workers and numerous pieces of equipment were working on the repairs last week. (iWN photo)

Workers at Argyle International Airport were on Wednesday still repairing large chunks of the runway and taxiway at the brand new airport, two weeks before it is expected to open, officially, with its first international flights.

iWitness News learned on the weekend that large chunks had been cut out of the runway and were being repaired.

iWitness News visited the airport on Wednesday, where scores of workers and multiple pieces of asphalt-laying equipment were working on a stretch of the runway that looked to be at least 100 yards (300 feet) long.

An airport employee, who is not authorised to speak to the media about the project, said that their understanding is that there was a problem with the way in which that section of the runway was compacted, and officials decided to dig it up and relay it.

The employee told iWitness News that they were told that the section of the runway “looked aged”.

iWitness News was referred to an employee in the quality control lab at the airport, but that employee declined to comment about why the section of the runway was being redone.

“I won’t want to disclose that information,” the employee said and referred us to the chief engineer on the project, Romel Ollivierre.

iWitness News has so far been unsuccessful in its attempts to reach Ollivierre for a comment.

Late Wednesday evening, iWitness News reached IADC spokesperson Jennifer Richardson, who confirmed that work was being done on the runway.

She, however, said she was not sure about the reason for the repairs.

She told iWitness News that she has been busy “with tours [of the terminal building] and everything else, so I have not been paying too much attention to that.

“So I need to talk to the lab but I have not done that,” she said, adding that she will try to do so on Thursday.

In addition to the section of the runway, workers seemed to be repairing a large portion of the taxiway.

Other sections of the runway also seemed newer than the surrounding areas, suggesting that they had been redone. However, iWitness News has not been able to verify this.

The work on the runway is being done even after the Eastern Caribbean Civil Aviation Authority (ECCAA), has given the go-ahead for the airport to begin operations at 12:01 a.m. on Feb. 14, according to Prime Minister Ralph Gonsalves.

Gonsalves, who is also Minister of Civil Aviation, told a Jan. 23 press conference that permanent secretary with responsibility for civil aviation, Godfred Pompey, has given him a letter to this effect, from the director general of ECCAA.

“Authorisation is hereby granted for the commencement of operation at the Argyle International Airport from 00:01 a.m. on the 14th of February 2017,” Gonsalves quoted the letter as saying.

Questions are now being raised about why these remedial works are being done on the runway after ECCAA has given approval for operations to begin there.

In December 2015, ECCAA granted permission for a chartered LIAT flight to land at the airport — then still very much a construction site — as part of a political rally by the ruling Unity Labour Party.

Three other small aircraft also landed there during that event.

The EC$729 million airport will open officially on Feb. 14 — six years later than planned — with scheduled flight by LIAT and Grenadine Air Alliance.

A number of chartered international flights are also expected to land at the airport on that day.