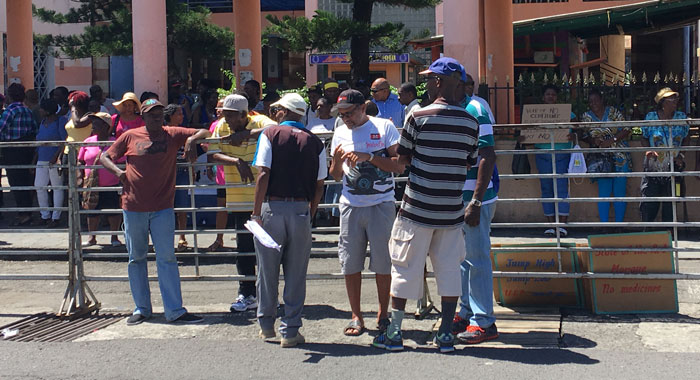 The main opposition New Democratic Party says its failure to secure the court’s permission to inspect ballots used in Central Leeward in the 2015 general election is a setback, but withdrawing its challenges to the election results is not an option.

“We must see this through to the end. Otherwise, we will be failing in our obligation to the people,” NDP President and Leader of the Opposition, Godwin Friday said one day after the Feb. 27 court ruling.

Friday, speaking on Boom FM, said that some persons who are not as intimately involved in the case may feel that the NDP should withdraw the petitions.

“But I have a better appreciation and I tell you what we are doing is absolutely essential and whatever the outcome is, we must see it through to its conclusion.”

He said that NDP supporters were disappointed by Justice Esco Henry’s ruling dismissing the March 2017 application for permission to inspect the ballot boxes.

Henry ruled that the application was similar to one that Justice Brian Cottle dismissed in 2015, and was, therefore, an abuse of the court’s process.

“The people are disappointed, yes. Discouraged? No. I don’t think anybody anticipated it to go the way it went …, not even the lawyers on the other side,” Friday said of the ruling.

Election officials say that the ruling Unity Labour Party (ULP) Sir Louis Straker won the Central Leeward seat among the eight secured by the party for a fourth consecutive term in office.

However, the NDP’s Ben Exeter has brought the challenge to the results, while his colleague, Lauron “Sharer” Baptiste has brought a similar challenge in North Windward, where the ULP’s Montgomery Daniel was declared the winner.

In Central Leeward, the presiding officer, Winston Gaymes, has admitted in an affidavit that he counted ballots, which, under the election law, should have been rejected.

Friday said that the court proceedings are not just about the petitions.

“… because from that constituency, once you have all the evidence, you can extrapolate what happened elsewhere,” he said.

Friday said that the NDP is not trying to win an election through the court.

“We want to know who won the election in 2015. You can only win an election at the polls. All the court is trying to determine is what happened at the polls,” he said.

He said that sometimes, the electoral process comes into question.

“It is said that you have to go to the court to have that determined. That is what we are doing. We are following our electoral process. We are following our laws. This is as essential as going out on Election Day. It is as essential as designing the ballot paper. This is part of the process. The process of electing a government is not simply going to the polls and voting,” the opposition leader said, adding that where there are questions, they are determined by the court.

He said that in the United States, the court had made a determination about whether George W. Bush or Al Gore had won the 2000 election.

Friday said that Bill Clinton, who was president at the time, observed that the American people had spoken but the nation did not know as yet what they had said at the polls.

“That is what we are trying to determine in the court: what did the people say in December of 2015,” Friday said.

“This is a bump in the road. We have had worse situations. Don’t forget the petitions were knocked out before and they are back on,” he said.

“We will have a chance to go to the court and try to persuade the court based on the evidence that we have that the allegations that are made in the petitions are valid and that they should be upheld and that we will have an opportunity to give to the public more of an exposé. Because that is what people want. They want to know what happened,” Friday said, adding that non-supporters of the NDP also want to know what happened in 2015.

“When you delegitimize not just the election but the election process, when people have no confidence in that process, then voting itself becomes an exercise that is fraught with danger and the outcome will no longer be accepted by whoever loses because you can’t accept the integrity of the process, that the process was free and fair…

“It is not a small matter. It is a very, very important matter,” he said.

And, Exeter, speaking on NICE Radio immediately after the court ruling, said, “… the setback is not only for me and the people of Central Leeward. It’s [for] all of St. Vincent and the Grenadines…

“I am asking you, continue with me in this fight. We are nowhere out. A little bit [of a] setback today. That’s all it is; a minor setback. But I am determined to see this to the very end.

“This commitment I have made from day one and I’m continuing to make this commitment. This impacts a lot of people and it would be very selfish of me to pack up now and cower and run away. It is not in my nature.”

4 replies on “Ending election petition cases ‘not an option’”