One Caribbean ready to fly 3 routes next Sunday 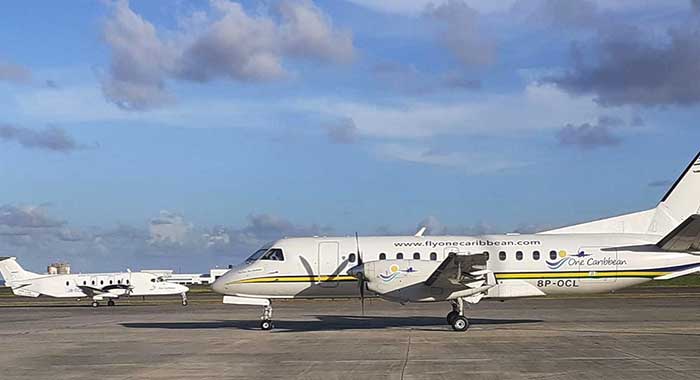 Vincentian airline, One Caribbean, is ready to begin regional flights as soon as next Sunday as part of its efforts to fill the void left by regional carrier, LIAT, whose government owners have decided to liquidate the financially troubled airline.

Vincentian Prime Minister Ralph Gonsalves, speaking on WE FM on Sunday, said he had had discussion the previous day with One Caribbean and a letter was supplied to him from the lessor of their planes.

“And they have immediately another SAAB 30-seater, it is really a 34-seater but they take off the back bench, so to speak, so that they can have more space for cargo so they run cargo. They accommodate 2,500 pounds of cargo…”

He said that the airline operates two SAAB 30-seaters and a 19-seater aircraft.

Gonsalves said that One Caribbean could get another 30-seater aircraft within two weeks.

“One Caribbean has given us — that is to say, the government — a proposal and they want to begin to move passengers on the 12th and I think they have been advertising that.

“I’m supposed to get a proposal from SVG Air tomorrow (Monday) and I am urging SVG Air and One Caribbean to coordinate their work.”

He said he had spoken to the principals in interCaribbean Airways months before the COVID-19 pandemic and had spoken with them since then.

Gonsalves further said that the chairman of Caribbean Airlines (CAL) had called him and he had been in touch with the airline before.

“They have sent me a document which shows that what they have at the moment, they can do 80% of LIAT’s pre-COVID network.”

He said that Air Caraïbes, a French Antilles airline, has two ATRs and a number of jets that link Martinique and Guadeloupe to Paris.

Further, there is Air Antilles, which operates outside of the CARICOM Multilateral Air Services Agreement (MASA) region and for which special arrangements would have to be made, the prime minister said, adding that this had happened before.

He said that One Caribbean would like to begin by moving people between St. Vincent, Barbados and St. Lucia and then within another week to Grenada and Dominica.

“And I am waiting on the proposal from SVG Air to do Grenada, more or less immediately, while they continue to do that link which they have been operating in the [northern Caribbean].”

Gonsalves said he does not know when CAL would recommence flying.

The prime minister said he is interested in regional travel and that is why Kingstown has halved its departure tax, bringing it down to US$20

“And what happens would be on the market place which you have and the investments and how these things are going to pan out,’ he said, in an apparent reference to competition among carriers.

“But we have assets, as I have identified, where, if there is coordination, we can move people. Because I am interested, I have to be interested in moving people,” he said, having listed the assets of each of the airlines.