Rose Place fishing base can continue alongside new port – Cummings 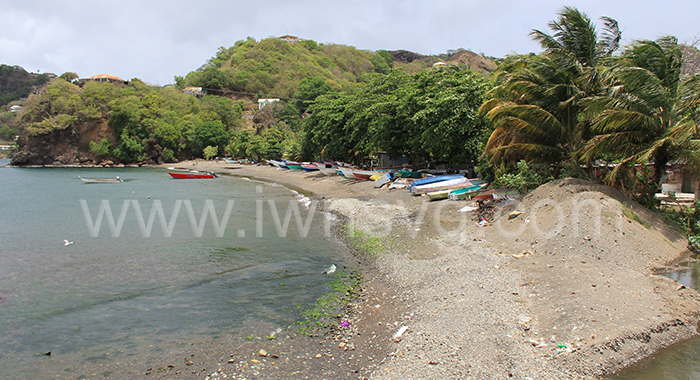 West Kingstown MP, Daniel Cummings, says there is not reason to uproot fishers from Rose Place to allow for the construction of the new port in Kingstown.

The opposition lawmakers said the port will be located entirely in the neighbouring constituency of Central Kingstown, but the government has to address the situation in Rose Place –located in West Kingstown — in order to secure the funding.

Cummings told a New Democratic Party community meeting in Rose Place on Thursday that he welcomes the relocated to Lowman’s Bay of the people who had been living on the beach.

He, however, said there is no reason why fishers cannot continue to operate from the only beach sliver of sandy beach remaining in the city.

“The project of the port is higher up but you can’t build a port like that and leave Ross place nasty. So I like what is happening generally,” he told the meeting, referring to the relocation to a housing project in Lowmans Bay, the people who lived in shacks on the beach.

“But there is no good reason why they cannot use the existing place here in Rose Place and build a proper terminal,” Cummings said, adding that the government has done so in Owia.

He said the government should build in Rose Place proper berthing facility so that fisher can pull up their boats on the beach there.

“You need to clean up the foreshore nicely. Move all the old buildings; build a beautiful boardwalk.

“I mean this is in the heart of Kingstown but you can enhance the docking facility for the boats. There’s good reason for that because you have the catchment of the boat operators right here.”

The lawmaker also noted that the area is relatively close to the fish market in the city, adding, “So you can’t come and close down the fishing industry in Rose Place.”

“But, Ralph Gonsalves and company, listen to me. You say you can’t die or you hard to die. But so long as the Almighty gives me health and strength, nothing will happen here with that project unless and until a proper and alternative facility is provided for the fisher folk here in Rose Place. Take my word for it. I know what I’m talking about.

“The people who putting the money in the project have specific clauses that you must address the needs of the people you’re uprooting.”

‘there are angels around’

Cummings said that is why when he asked in Parliament for a copy of the document produced by the Caribbean Development Bank (CDB), one of the financiers of the project, the government refused.

“But they are real idiots you know. They ain’t learning, they forget that there are angels around. Daniel Cummings must get the information and he has…

“So let them know that they must meet the requirements of all the people they’re displacing and including the important fisher folk.”

Cummings laid out a “charge”, accusing the government of being “hell bent on putting the fisher folk out of business in this country.

“And I am going to set out to you systematically how we have proven them to be undertaken this initiative step by step,” he said.

The Unity Labour Party (ULP) administration had built houses in Lowman’s Bay for people who lived on the beach in Rose Place, who had to be relocated as part of a new port to be built in Kingstown.

But Daniel told the meeting that unlike the Argyle International Airport, funding for the port “ is coming from institutions that require them to do things properly”.

He said the CDB required the government to move the people living on the beach to proper houses and this is why it was done.

“They didn’t do it because they love you. If they did, I have been begging them since 2005 to find alternative housing for you because that is not a place to live,” Cummings said.

He said that as big as the port project is, it has “absolutely nothing to do with Rose Place.

“No part of Rose Place will be impacted by that port project. The entire project is in Central Kingstown.”

He said he was pleased that housing was provided for people who lived on the beach, but that is but one step.

Cummings said that there are four people who the government has refused to give house, although some of the houses at Lowmans are unoccupied.

“One man has been sleeping on a hammock under a shed over 19 years and they’re not recognising that he has no other place to go.”

The opposition MP said he had made representation on the man’s behalf.

“… wickedness, bad mindedness spitefulness is what ULP is about, but I give you one solemn promise, no project taking place until everybody who qualifies gets a house, … until they do it justly and fairly to everyone, that project going no way, Jose. Ralph, put that in your pipe and smoke it.”

He said that as regard the shops that some of the relocated residents operated in Rose Place, the government does not understand that it has uprooted the clients.

“…  and they haven’t even made any provision for them in Lowmans Bay to say help them to build a shop.”

Foreign companies given ‘even what they don’t want’

The lawmaker said that the government has failed to assist fishers even as foreign companies are given “everything they want [and] even what they don’t want”.

He said that for over two years, there has been a regional project that contributed to the government a lot of equipment that will make the fisher folks life safer out at sea.

“And they have this equipment for two years  — safety equipment. They refuse to give it to the poor fisherman,” Cummings said, adding that fisher folk in Grenada have received their equipment.

“They said COVID stop them. Now COVID stopping them from doing anything? They bringing Carnival, but they can’t do the training for the fishermen. They don’t give a damn about you, the people.

“Yes, all the rain falling in the forest and nothing for the people,” he said in an apparent reference to Rainforest Seafood, a Jamaican company to which the government has given tax and duties concession as part of an EC$10 million investment, that includes a processing plant at Calliaqua.

Cummings said the government had asked the fishing boats that operate from Rose Place and how many of the owners live there.

“Any idiot knows that fishing is a national enterprise. The people who have the money to buy the boats come from all over the country, but many of them ain’t know a damn thing about the boat… The reason why you have fishing in Rose Place that’s because the people have years of experience of operating the boats and bringing in the fish.”

He said that is what makes Rose Place special.

“… jackasses, is the people who go on the boat that matter. So when ULP talking they rubbish about people not belonging here, all the people who operate on the boats come from this community. That’s the beauty of it.”

He said that although he was not invited, he attends the discussion that the government has with fisher folk.

“They want to get between the fisher folk and the owners of the boats and put the people down here out of a livelihood. Why I said that? They offer them a package if they would say, ‘I don’t want to pull up my boat in your Rose Place anymore.’”

He said the government wanted the boat owners to make that commitment without being offered an alternative location to land their boats.

“They say, ‘If you say, ‘I wouldn’t to pull up my boat and Ross place anymore’, I go take taxpayers dollars and pay you.’

“And they go further. They said, ‘We will give you a few dollars and if you want, you can pay the people who work on the boat some of the money.’ That is contempt with which they hold you the people of Rose Place.  They’re not paying you because they putting you out of a livelihood. They paying some of the boat owners and tell the boat owners if they want they could pay you.”

Cummings said he had attended a consultation at the Methodist Church Hall in Kingstown, and what the discussion shows that the government does not care about the fishers in Rose Place.