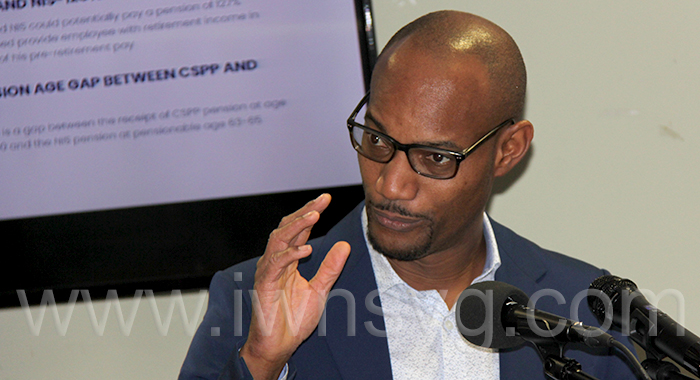 Stewart Haynes, executive director of the National Insurance Services, makes a point during the consultation with the media in Kingstown on Tuesday, Nov. 22, 2022.

Pension reform in St. Vincent and the Grenadines will have to take place by 2024 if “draconian changes”, such as, for example, increasing National Insurance Services (NIS) contribution rates by 10 percentage points are to be avoided.

“So, the NIS is currently unsustainable in the medium and long term,” NIS Executive Director, Stewart Haynes told the media at a consultation in Kingstown on Tuesday.

“Based on management’s and the external actuaries’ opinion, those measures will have to be implemented before 2024. Otherwise we’re looking at draconian changes thereafter,” Haynes said.

“We’d like them to happen before 2024 and the management narrative and position paper are strong on that. So, we’re hoping that it will be implemented,” he said in response to a question after a presentation on the state of the NIS.

In 2021, four years after the government outlined six options for pension reform, the issue was, again brought on the front burner as this category of spending continues to burn a hole in the government coffers.

Last year, Finance Minister Camillo Gonsalves estimated that pension payouts in 2022 would be EC$60.3 million, adding that these outlays are unsustainable.

The situation at the NIS exists even as Haynes pointed out, on Tuesday, that for 85% of pensioners, their NIS pension is their only shield against poverty.

When asked, Haynes did not speculation on the factors that might prevent the needed changes from taking place by the time identified by the NIS and actuaries.

“… I can’t say what will stop it. What I can say is that I would give the best advice,” he said, reiterating that when it comes to social security matters, he is an advisor to the Cabinet.

“If it was an administrative matter, I could say I’m going to do it. But those decisions are made at the Cabinet and the Parliament, which are outside my remit. I will give my best advice for us to make sure the NIS is sustainable.”

Haynes said the longer it takes to make changes to the pension system in order for it to be sustainable, that means the costs will significantly exceed income.

“A sort of a phase-in method would be let us look at the Dominica situation because they increase like 0.5 [percentage point] every year up to a period. So you know exactly when the rate’s going and increase. So that is more gradual and so forth than a draconian — jumping by by 10 percentage points.”

Haynes, however, noted his that the NIS is a statutory entity.

“… we don’t makes that statutory decision but I give my best, honest advice. That is my duty — to make sure it is timely, accurate, and it’s in the best interest of all stakeholders.”

The alarm bells about the pension system has been peeling for decades, as some people, could retired with a pension that is 120% of their salary.

However, the radical reforms needed to make the NIS sustainable are yet to be implemented.

Haynes, noting his training, experience and knowledge as an actuary,said he serves on acabinet-appointed  committee for the reform of the civil service pension plan.

Retired civil servants receive a pension to which they make no contribution, meaning that it is funded entirely by taxpayers.

“… based on sentiments expressed, it appears as if for the civil service pension plan, they want action in 2023,” he said.

“And we’re engaging also in consultation so that we can get viewpoints and so forth. But there’s some factors that must be changed for the system to be sustainable and I can tell you that as an actuary… So it’s closer than we thought, I would say. And so far, it seems as if that will be the period of implementation,” he said, referring to 2023.

Reform of the pension system could potentially result in the lost of some political capital, and Haynes was asked whether the thinks that a government should “just bite the bullet in the long term interests of the country and pension system”.

“As a responsible citizen, I would like pension reform and as an actuary, I will look at our system, I will give my advice to any policy maker that reform is necessary. That would be my advice as an as a professional.”

He explained that actuaries, including himself, would do actuarial assessment to determine the adequacy and affordability of any pension systems.

“And we’ll make some recommendations based on looking at the cost trajectory and the revenue trajectory. But we are responsible to look at the socio economic realities.”

To illustrate, Haynes said that if pension reform were  promulgated to be adopted in 2020, 2021, in terms of the  socio-economic  realities, COVID-19 and its consequences were unknowable.

“So, to implement reform in an unknowable sort of a period, very uncertain, you have to be cautious.”

He said said that inflation is transitory.

“We’ll have high inflation; we’ll have low inflation. We have up-cycle we have down-cycle. So, it delays looking at the socio economic condition.”

The NIS executive director noted that inflation is high now and economists and actuaries are guesstimating about its project.

“However, we have to balance — absolutely a delicate balance. So, if, theoretically, for instance, the contribution rate is 21% and we noted the socio economic challenges, then we’ll say, ‘Okay, the system needs to be sustainable, workers need to put food on their table, pensioners also need to put food on the table. So, instead of go 21%, let us compromise and go X per cent less than 21%.’