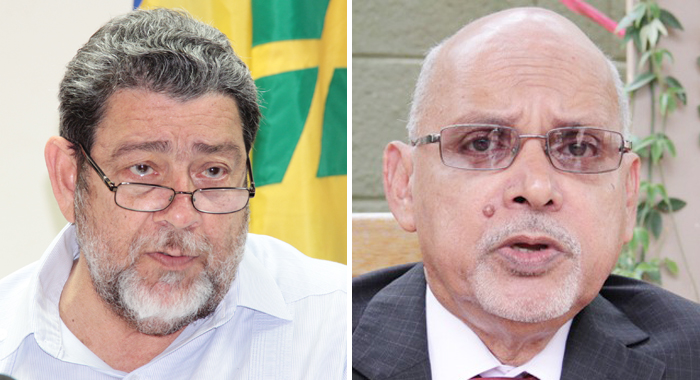 The Trinidad-based Seventh-day Adventists (SDA) pastors who recommended that now disgraced envoy, Edson Augustus be appointed as SVG’s Deputy Consul General in New York in 2011, came under scrutiny on Wednesday as a journalist asked probing questions of Prime Minister Dr. Ralph Gonsalves at a press conference.

The pastor, Clive Dottin, has told journalists in St. Vincent and the Grenadines that Gonsalves consulted him ahead of Augustus’ appointment in May 2011 and he supported the move.

Augustus, who was appointed three months after he resigned as an SDA pastor amidst certain allegations, was recalled last month after admitting that he took money from persons in New York and promised to help them source U.S. Permanent Resident Cards, commonly called “Green Cards”.

At the press conference on Wednesday, a journalist noted that former prime minister, Sir James Mitchell, had said Italian Dr Aldo Rolla had conned his government in the failed Ottley Hall Marina project.

“You think Mr. Dottin conned you, too?” the journalist asked Gonsalves.

“What Mr. Dottin gave was a recommendation knowing him (Augustus)” Gonsalves further responded.

Pastor Dermoth Baptiste, head of the SVG SDA mission, has also told I-Witness News that he supported Augustus’ appointment when Gonsalves contacted him.

“I know Clive Dotin, I know of his work; I know Mr. Baptiste. Neither of them saw anything — and I am sure if they saw that Mr. Augustus would have functioned outside of the scope of his employment they would have drawn that to my attention,” Gonsalves said.

“And if that has happened, I would have taken that into account and bring it to the attention of Cabinet; and we make these decisions very soberly,” Gonsalves further said.

The government has fired Augustus, saying that in offering to help persons source Green Cards, he acted outside the scope of his employment.

Gonsalves said that he had a report prepared by the Special Branch, the intelligence arm of the government.

“I talked to other people too, but I am telling you about these two churchmen,” he further said.

“Now, what is passing strange, I hear those with 20-20 vision — perfect vision, hindsight — say that it (the appointment) should not have happened … because there were, quote, unquote, allegations about him.

“Why didn’t anybody at that time when the appointment was made make public the allegations? Why didn’t they?“ said Gonsalves, who is also Minister of National Security.

3 replies on “Did Trinidad pastor ‘con’ Gonsalves into appointing diplomat?”