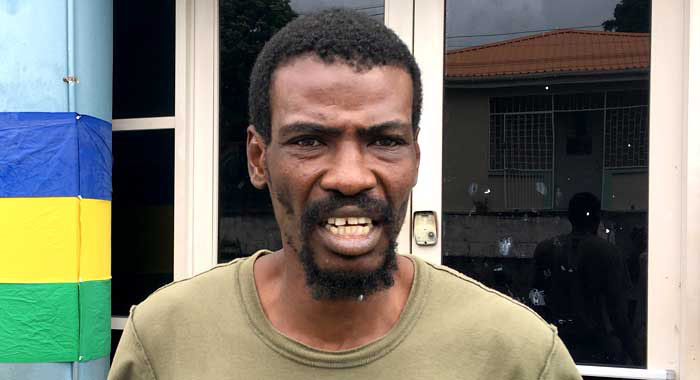 Farez Prescott says he would reveal the identity of his assailants if police drop the charges against him. (iWN photo)

One of the men who survived the shooting incident in Paul’s Avenue Saturday night that claimed one life made it clear to iWitness News on Wednesday that he would only tell police the identity of his assailants if prosecutors drop the unrelated charges he now faces.

Farez Prescott, 40, had hinted that much when he appeared before Senior Magistrate Rickie Burnett moments earlier at the Kingstown Magistrate’s Court.

But after he exited the court, he told iWitness News that that was exactly what he was saying.

The Paul’s Avenue resident is charged that on Sept. 1, also at Kingstown, he stole EC$150 from Ismael Jack of Kingstown Park.

He is further charged that on Sept. 4, at Kingstown, he stole EC$50 from Amos Baker — his 66-year-old uncle, a resident of Vermont.

He is also charged with dishonestly disposing of the animals.

Prescott pleaded not guilty to all charges.

Denisha Charles is the co-accused in the theft matter and has been granted EC$2,000 bail with one surety.

Hezikiah Fraser and Uriah Bowens have been charged in connection with the theft of the animals and have each been granted EC$3,000 bail with one surety.

Samuel did not object to Prescott’s bail but asked that the court demand sufficient surety.

Prescott, however, told the court that he did not have anyone who could stand as a surety for him as his uncle who used to do so is now in Tortola.

The man, who was shot in the right hand and left leg during the incident Saturday night, told the court that it seemed as if some police officer wanted him to go to jail rather than to solve the shooting incident.

He said that he knows who shot him, adding that bringing the charges against him does not make sense.

He said the three persons who were shot were discharged from hospital on the Monday after.

Prescott said that after being discharged from the hospital, he went to see his employer, Demus, a roast pork vendor in Paul’s Avenue, to get some food.

He said that while there, he heard someone shout “five-o”, meaning police.

The injured man said that while he could have hopped behind a vehicle and hide, he did not do so.

He said that as the police vehicle passed by, one of the detectives signalled to the driver to stop, saying that Prescott was wanted.

But the prosecutor told the court that Prescott had been on the run from the police for some time, since he knew the charges were pending.

Samuel further told the court that because of Prescott’s injuries he was unable to elude the officers on Monday.

As Prescott maintained that he would not get anyone to sign his bail bond, Samuel told the court that she has known the defendant for more than five years and was confident that he would not turn up for a trial.

“His reputation precedes him,” she told the court.

However, the magistrate decided to release the man in his own recognisance.

“Well, Mr. Prescott, I am going to have my own experience with you,” Burnett told the accused man.

To the prosecutor, the magistrate said, “I am going to grant him his own bail, prosecutor. Let him fail me.”

Prescott commented: “I am not going to fail you.”

“Well, we will see,” Burnett replied.

Prescott was one of four men shot by three unidentified assailants in Paul’s Avenue around 12:25 a.m. on Sunday.

Acting Commissioner of Police, Colin John, said on radio on Monday that the police had “cogent information” about the identity of the shooters.