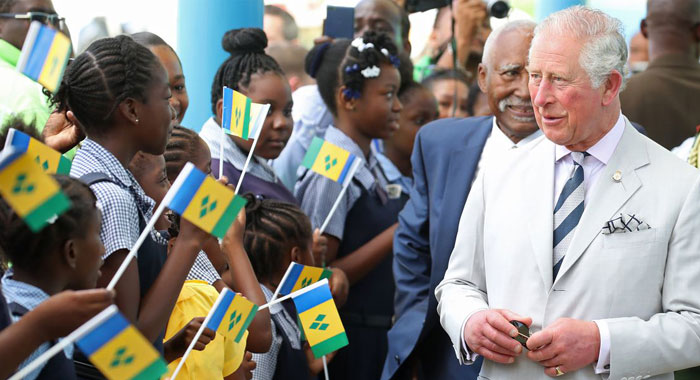 Our country, Yuremei (renamed St. Vincent and the Grenadines by the British Colonialist) has a great history. If we learn it and sell it to the world, it may just become another attractive selling point for our nation.  Our people are people, a determined people, and who have willingly shed blood, sweat tears in our quest for , independence and liberty.

From the moment he arrived last Wednesday, Prince Charles should have been confronted with this history. Instead he was feted on the asinine premise that his mother is our queen and he is our prince. This is legalistic, ceremonial nonsense. Chatoyer is our king and we, his off spring, are the princes and princesses of this nation. Charles is a usurper and we are his enablers.

Charles should not have been greeted here. Not now. Not ever. We should have made an excuse, any diplomatic nicety as a rationale for why it would have been inopportune or inconvenient to accommodate him at this time. “Renewal @ 40” anyone? It is an affront to our dignity as a people to entertain the personal embodiment of the British Empire during National Heroes Month and one week after National Heroes’ Day celebration for national hero, Joseph Chatoyer.

Charles should have been reminded that the British Royal family was ceded control and dominion over our nation in 1763 at the Treaty of Paris. But our proud fore parents would have none of it. How do we allow Charles to visit St. Vincent without reminding him that from 1763 to 1797 our people fought two valiant wars against forces sent to conquer us by his royal linage?

Why was he not told that after British forces assassinated paramount chief, Joseph Chatoyer in 1795 our people fought for an additional two years before conquest? Charles should have been made uncomfortable with the gruesome facts that his people rounded up over 5,000 of our Garifuna brothers and sisters and banished them from their homeland, placed them on Balliceaux, a place the colonial governor said was only fit for lizards. Over 2,000 of them perished there and the governor had the gumption to declare that they died because the food served was too good for them.

Charles should have been told that his nation committed war crimes, genocide against our people. Someone should have looked into his eyes and told him there is no statute of limitation on genocide and war crimes.

Charles should have been given a lesson in Garifuna, Kalinago heroism, determination and resistance. Our people’s history should have been traced. He should have been confronted with the facts that the remaining Garifuna were shipped to Roatan, an island in the bay of Honduras, where some initially migrated to Honduras, Belize and Nicaragua and later to the United States.

Charles forebears tried to annihilate our people, but banishment was a blessing in disguise. Exile allowed those in the diaspora to retain the language, religion, history and culture while colonialism and domination from conquest to independence destroyed our Garifuna history, language and culture at home.

A lesson in the history of Yuremei and its people would have allowed Charles to understand that our commitment to freedom explains why of all the countries conquered by the enslaving powers, Yuremei experience of chattel slavery was the shortest, a mere 41 years. Barbados, for example, was conquered and dominated from 1640.

Charles should know that it was his royal family in 1670 that formed a company that went into Africa, stole and enslaved our ancestors, dehumanised them and brought them to the New World, where they worked for 100’s of years. Charles should have left here with the inconvenient truth pounding in his head that the comfort, wealth and riches that he and his ilk enjoy came from our people’s labour.

Was Charles reminded that when our country became independent 40 years ago, his mother left us with an illiteracy rate of over 50 per cent, a ramshackle health system with an old colonial military barracks as a hospital? Who looked Charles in the eye and scolded him for the fact that while the Caribbean was once seen as the most prized piece of real estate in the world, for the riches it brought to England and the enslaving world, his family saw it fit to build only two secondary schools after 181 years of colonial domination?

Charles should not have left here without knowing that Yuremei is the modern day capitol of the reparations movement. Did anyone remind him that the first regional reparations conference was held here in 2013? Does he know that our nation pounded the reparations drum for years at the United Nation? Is Charles aware that it was our leadership that led CARICOM to call on the former enslaving powers, especially Britain, to pay reparations for genocide, slavery and underdevelopment brought on by colonialism?

Who told Charles that all Caribbean people were insulted when, in 2017, former British PM Dave Cameron, whose family, as was his, held thousands of enslaved Africans across the region, declared in Jamaica that we the descendants of those humans who were viewed and treated as property should get over our past (African holocaust) and move on?  Someone in authority should have reminded Charles that his family, his government agreed to pay 47 million pounds to the slaves owners and none to our ancestors when slavery was abolished in 1838. Charles should have also been told of the dastardly nature of his government in that the British government paid 20 million of the 47 million pounds and made our ancestors work between 1834 and 1838, the so-called indentured period to pay off the remaining 27 million pound. Does Charles know that we were not freed, but that we bought our freedom with our own sweat and blood?

In trying times like these, we should remember Caspar London. When Charles’ sister Margaret visited in 1967, Caspar, Patches Knights and others protested the visit with slogans like “Go Colonization Go”. For this act of bravery Caspar was mercilessly beaten by the colonial police. A sister who protested the assault on Caspar was kicked and arrested along with him. Does Charles know of this history of resistance to him and his kind?

No one here should be smiling for Charles. Our children should not line the streets to meet and greet him. His family, his country, England has a case to answer for the genocide and enslavement of our people. We say reparations now.

We must never forget Caspar’s teachings: Dare to struggle, Dare to win.

19 replies on “A reparationist response to Prince Charles’ visit”